This hasn’t been the most exciting offseason for the Royals. With only a couple of major-league transactions on their ledger this winter, we’ve had a bit more time to look at the bigger picture of what the team has accomplished over the last few years, as well as how another playoff appearance could impact the legacy of this front office.

Over at BPKC headquarters, we’ve talked a bit about some impressive four- or five-year stretches in recent history, wondering how the Royals would measure up if they cap off this run with another pennant. To gain some perspective on what they’ve done so far, I looked back at the last 15 years of results for every team, and calculated their four-year rolling averages in the win column. As a simple way to include playoff success, I added in postseason wins as well.

To see the full comparison I could combine all 30 teams into a single graph, but I won’t, because I care about your eyeballs, and 30 different colored lines would almost certainly ruin their development. That’s a lot of words about some graphs, so here are the graphs (click to enlarge): 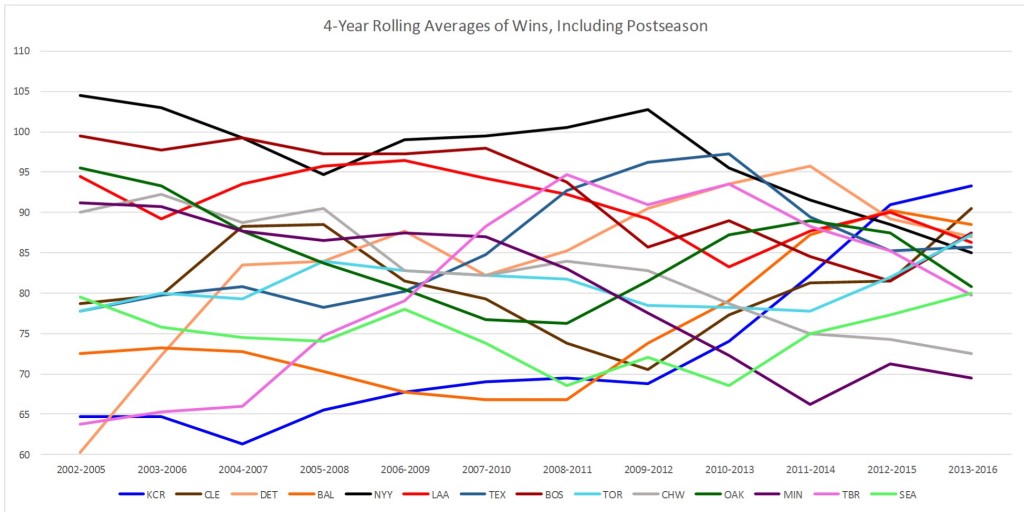 This graph has a very prominent trend. Years ago, the AL teams were in some fairly distinct tiers, but over time, and possibly due to the addition of the second Wild Card, those tiers are no longer distinct. There’s still a bit of separation though, starting at the top of the last point on the graph. That point belongs to the Royals.

That bright blue line has made some big jumps over the last several years, finishing just above the 93-win mark in the most recent four-year stretch. Cleveland is in second place, nearly three wins behind the Royals. That’s a significant gap.

In other words, the Kansas City Royals have been the most successful team in the league over the last four years, and there really isn’t a logical argument to the contrary.

In the last four years, the Royals are the only AL team with multiple pennants, and while the Red Sox won a title in 2013, they were also terrible the following two years. Other teams may have more playoff appearances, but no team has more playoff wins since 2013, and only the Indians have more regular season wins (352) than the Royals (351).

Even if you extend the timeline to include the 2012 season, the Orioles are the only team who has won more games than the Royals, but they don’t have a shiny trophy like the one in Kauffman Stadium.

Now, this four-year run doesn’t quite measure up to some of the other peaks on that graph, but another chunk of postseason wins would vault them up there, and a World Series title could put them next to the 2003-2007 Red Sox for one of the best five-year stretches of recent memory.

Now let’s check out the NL teams, for funsies. 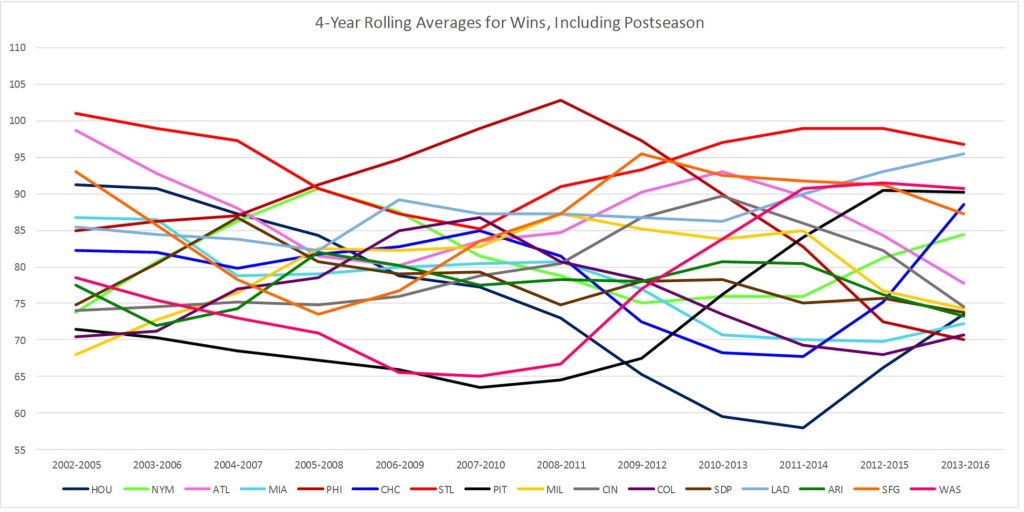 The first thing I noticed from this graph was just how impressive the Phillies’ run was, as well as how the whole thing collapsed on them. Also the Astros’ line nearly broke the bottom edge of the graph. This one doesn’t quite follow the same pattern as the AL graph, although there is still a bit more clustering since the Wild Card game was instituted.

Beyond that, you can see that only the Cardinals and Dodgers have won more games than the Royals since the start of 2013, and you can count their World Series titles on zero fingers. The Cubs have had a pair of great years preceded by bad years. The Giants would look better if the four-year stretch didn’t include odd-numbered years. And the Nationals haven’t been able to get over the hump in the first round of the playoffs.

You can make a pretty good argument that no National League team has been more successful than the Royals since 2013. If the Cardinals win a title in 2017, perhaps that changes, considering all their other playoff victories, but for now, the Royals are on top.

I’m going to type this again: the Kansas City Royals have been the most successful team in baseball over the last four years.

Has it taken some luck? Absolutely, they have had their share. You can’t point to a single championship team that didn’t enjoy a bit of good fortune. That’s how baseball works. One great season can happen due to luck. But four years of at least a .500 record, a pair of pennants, and a World Series title? That takes more than luck.

This isn’t meant to be some kind of “rah-rah, the front office is perfect” kind of post. The Royals have made some mistakes along the way, and I don’t think they’ve done enough to bolster their chances in 2017 just yet. Regardless of what happens next year though, what’s happened in the last four years has happened. It can’t be hand-waved away. The Royals have enjoyed more success than anyone recently, and they’ll have one more opportunity to enjoy some more of it.