Over the past few seasons as catching metrics continue to grow, one thing we’ve seen become more and more prevalent is the framing metrics. On Baseball Prospectus, you can see framing metrics presented as the number of runs catchers either gain or lose their team throughout the course of the season. Now here’s a controversial statement: it’s good to be good at framing.  It’s not a guarantee that your team will be good if they can frame, but “stealing” a few extra strikes over the course of the season is never a bad thing.

Note: All stats in this article are through Tuesday’s action.

The Diamondbacks rank as the best team in baseball in terms of framing runs with 19.1, which is a decent amount more than the Dodgers who are second at 16.9. Man, it can’t be fun to be a Padres hitter in that division with the best two teams in baseball getting extra strikes all over the place. The Rockies are seventh with 6.9, so the NL West is a framing bloodbath. The rest of the top 10 teams are Toronto, Boston, Houston, Cleveland, the aforementioned, Rockies, Seattle, Philadelphia and the Yankees.

The worst team in baseball in framing runs is actually the Cubs, who are quite good and rank seventh in baseball in ERA as a staff. They also rank 20th in DRA, so take that for what it’s worth. But again, this isn’t always a perfect correlation. And second worst is your Kansas City Royals, worth -13.9 framing runs over the course of the season. The bottom 10 teams in framing runs are San Francisco, Tampa Bay, Pittsburgh, Baltimore, the Mets, Cincinnati, the White Sox, Texas, Royals and Cubs. There’s a lot of range there in team quality and pitching staff quality, but they’re at the bottom.

You’re reading this because you likely want to know what it means for the Royals. Just think if Danny Duffy had gotten the call against Jake Cave the other day or any number of instances where it sure seemed like the Royals got the short end of the stick. Well try this on for size. The Arizona Diamondbacks have had 50 pitches that were clearly graded as outside the strike zone called strikes. The Royals have had 27. That may not seem like a big deal, but it’s 85 percent more, nearly twice as many. That helps pitchers big time.

But the real value of framing can come on the borderline pitches. These are the pitches that are right around the edge of the strike zone, either just within it or just on the outside of it. This is where we see the most arguments from hitters, pitchers, managers, fans, broadcasters, passersby, etc. The Diamondbacks have gotten 1,685 called strikes on those pitches. The Royals have gotten 1,405. 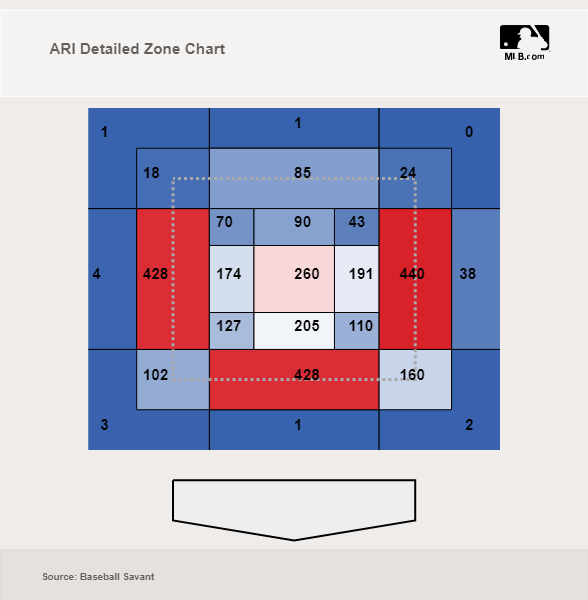 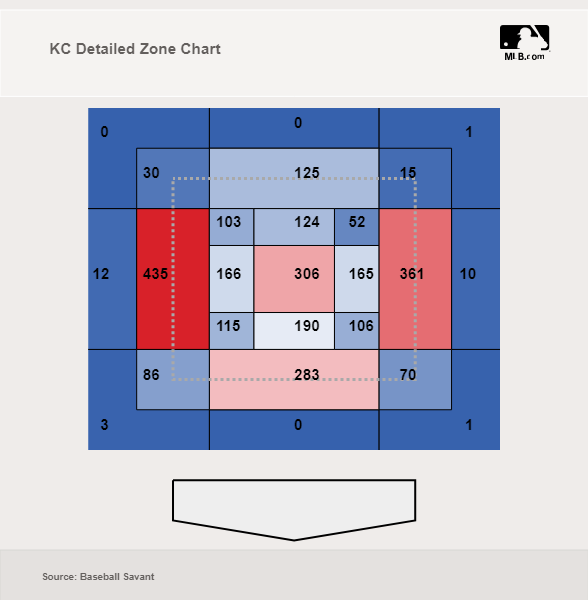 It’s not all Zack Greinke either, though he’s a master of his craft. He’s thrown 13.6 percent of the Diamondbacks pitches this season and he has had 18 percent of their non-strikes called strikes, but only 15 percent or so of the borderline pitches were called strikes. So he helps, but not enough to write it off as him carrying a team in this statistic.

The point is that this is a problem. I brought it up in Friday Notes a couple weeks ago, but if the Royals are going to be counting on young pitching over the next few years, they’re going to need to find a catcher who can help steal them a few extra strikes. Well, now hold up. That’s not entirely true. If they can build a staff of swing and miss pitchers, that would help too. But based on the 9.2 percent whiff rate the staff has posted this year (league average is 10.7 percent and they rank second to last), I’m not sure that’s coming just yet.

The issue is that Salvador Perez isn’t the guy to steal strikes. Of 102 catchers rated, Perez ranks 100th in framing runs at -7.7. And because I know you were wondering, Drew Butera ranks 98th with -6.6. Royals pitching has been bad this year, but they certainly haven’t been helped much in this realm.

This isn’t me saying that Perez isn’t good enough to catch for a good team. He obviously was the rock on a World Series champion in a year where he ranked 90th out of 109, but he was also worth a much more palatable -2.7 runs. And he obviously brings more value behind the plate than just framing pitches as he has one of the best arms back there of any catcher. This year, he ranks at the top of baseball in throwing runs with 1.0. I think that metric is a little faulty because I wonder how many attempts just don’t happen because he’s back there, but even so, it highlights how important framing is compared to throwing.

But never fear, Royals fans, there is good news. Drew Butera is a free agent after the season. That’s good news in itself, but the icing on that cake is that Cam Gallagher can frame a little. He ranks 41st this season, but has a great reputation in that role and should be the backup catcher next season. I believe it would behoove the Royals for development purposes at the very least to give Gallagher at least 60 games behind the plate next season to let him turn some balls into strikes and get some of the young pitching to find maybe a little more success. It doesn’t hurt that Gallagher isn’t a zero with the bat like Butera and that he probably has some familiarity with a lot of the pitchers. And hey, it’s not like Salvy couldn’t use the days off.

The point here is that framing makes a big difference. Maybe stealing a few extra strikes won’t put the Royals in the playoffs in 2019 (okay, no maybe about it; it definitely won’t), but it could help in numerous ways for the years when they are fighting for that spot. Teams like the Royals can’t be passing up opportunities to get a little off the edges. You never know when it might pay off.

Tags: Cam Gallagher, Drew Butera, Salvador Perez, Zack Greinke |
David Lesky
Follow @dblesky
I've been a Royals fan since the day I was born, and have had the opportunity to write about the Royals for nearly a decade now. The winning was better than the losing, but the losing is kind of familiar at least.
read more from David Lesky

6 comments on “You’ve Been Framed”

Can framing be learned or taught?
Could Salvy improve or is this like plate discipline where you have it or you don’t?

Theoretically it can be learned. But at this point, I’d doubt he will.

Framing is a sham. There is no way to know if the reason irs with an ump’s bad call, the catcher’s “framing” skills, the ump giving a strike to a veteran pitcher or squeezing a batter. This so called stat is nothing more than the wet dream of some saber-metric devotee. How anyone takes this seriously is beyond me. It is so riddled with subjectivity that it cannot be seen as a true indicator of anything, at least nothing real.

You seem to be already convinced, but I’d recommend doing some additional research regarding framing before dismissing it the way you have. It is most definitely not a sham, but people are going to believe what they want to believe.

Salvy seems to have a good reputation with umps, so I would think that he would get some borderline calls (if framing is not a real thing). I do not dislike Butera, but he is 34 years old with no great skills. Gallagher should see a bunch of action after Sept. 1. Ned’s love affair with veterans impairs the rebuild. Butera playing 1st base for 2 days this week is inexcusable. Ned may be the real issue.