Adding a new pitch isn’t always easy. Some pitchers may be able to tweak an old pitch to create a new one, but learning a brand new pitch from scratch can have its difficulties, which is why many pitchers won’t bother with changes to the repertoire that got them to the big leagues. They’d rather dance with the one that brought them, to paraphrase a famous Twain.

In an article for The Kansas City Star on March 24, Kris Medlen was quoted thusly: “You get locked into throwing the baseball a certain way, and it’s hard to pick up and get a new pitch. It would probably take some time. I’m sure I could, but I really like to keep things simple.”

As it turns out, Medlen was right, in that he could learn a new pitch. And apparently “some time” is actually just a few weeks.

Pitch f/x data has Kris Medlen throwing a cutter for the first time. He says it’s a slider he’s been working on. It’s felt good so far.

To be completely fair, this isn’t the first time Medlen’s thrown a cutter/slider*. According to Pitchf/x, he tinkered around with one for a few starts in 2012, as well as in the middle of his 2013 season. But this is the first time Medlen seems intent on fully incorporating the pitch into his repertoire.

*Some might call it a slider. Some might call it a cutter. Truth be told, I don’t know what it’s called. I just know the sound it makes when it takes a bat’s life. For simplicity’s sake, I’ll be referring to the pitch from here on out as a slider. The two pitches can often be looked at in a similar light, and are often confused with each other, so we’ll default to the pitcher’s preference. Also, Baseball Savant is classifying it as a slider. A vote of 2-to-1 means the motion passes.

On the season, Medlen’s thrown his slider more often than every pitch but his sinker. It’s also been quite effective, as it boasts the highest strike rate, swing rate, whiff rate, and whiff-per-swing rate among all of his pitches, as evidenced by the following chart:

Opponents are 4-14 against Medlen’s slider this year, although three of those hits came on Saturday, including a double from Manny Machado that was positively scorched, coming off the bat at more than 111 mph. Generally speaking, however, Medlen hasn’t given up much with his new pitch this season, small sample size though it may be.

The reasons for Medlen’s early success with the slider appear to be multi-faceted. The first thing that jumped out to me was simply the newness of the pitch. Opponents haven’t seen this from Medlen before, so batters haven’t had a chance to adjust yet. The slider doesn’t fit in with Medlen’s other pitches, as far as movement goes, so it’s a different look. Here’s a chart of Medlen’s other four pitches, based on horizontal and vertical movement, prior to this season.

I should note that the second chart is grouped by inning instead of game, as a way to provide more data points. It’s also more visually appealing, which is nice.

The slider (I know it’s called a cutter in the chart, but stick with me here) fills that gap in movement, and it does so at a similar velocity as his changeup. Medlen can also throw the slider up to around 89 mph, which isn’t too far off of his sinker, which averages just north of 91 mph. This leads to the second possible reason for his positive results on the slider, in that it doesn’t look demonstrably different out of his hand. 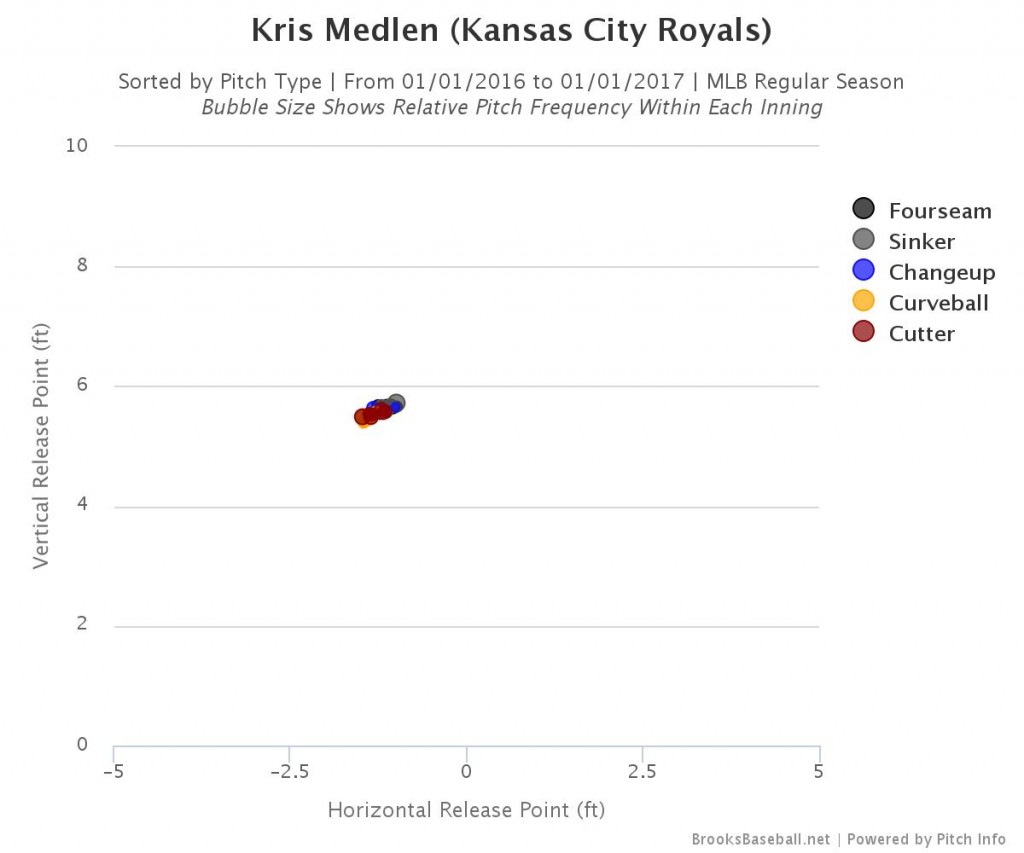 His arm may drop slightly lower on the slider, but it’s not much – maybe a fraction of an inch – and it’s very similar to the curveball, which obviously has a much different break. In other words, Medlen isn’t giving away anything based on his arm slot, and because it’s in a similar velocity band to other pitches, it’s a difficult pitch to pick up right away.

It’s also a difficult pitch to pick up, because he’s willing to throw it in various counts. 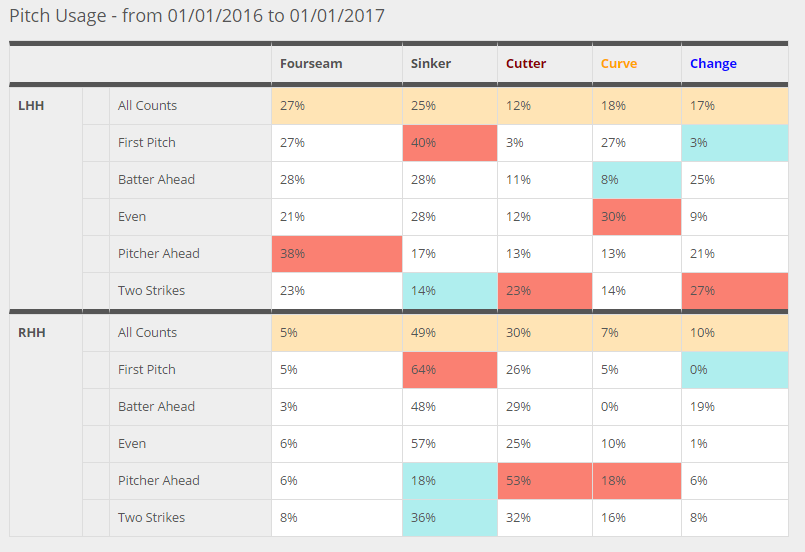 He hasn’t fully unleashed it against lefties, but it’s not a pitch they can completely eliminate after the first pitch, either. And if opponents fall into two-strike counts, they might as well roll a die to figure out what’s coming next.

Because the league hasn’t seen this from Medlen before, and because of how and when he throws his slider, it’s been very tough for hitters to square it up, if they make contact at all.

The 50 percent whiff-per-swing rate on his slider is higher than every other starter’s cutter, and it would rank among the top 12 among starters’ sliders. When they do make contact, it’s been on the ground more often than not, with a 75 percent ground ball rate.

I’ve got to say, I think Medlen’s new pitch experiment seems to be going quite well. Obviously it’s still early, and things could change as hitters get a chance to see the slider on film and/or in person, but what we’ve seen thus far is encouraging. It’s a pitch that gives batters another thing to think about, and as he continues to become more comfortable with it, he might be able to make it even better. Perhaps learning a new pitch isn’t always as difficult as it seems.