It was a 2-4 day for the affiliates with an extra inning win for NW Arkansas. The Chasers couldn’t keep pace with the Dodgers in their last game before the Triple-A All Star break Sunday. Starter Luke Farrell was knocked around for eight runs in just four innings of work while giving up seven of the eight Omaha hits allowed on the day. Trailing 8-3 after three innings the Chaser bats could provide just two runs late to fall by three runs. Outfielder Orlando Calixte remained hot in finishing off the first half, going 4 for 5 with a home run to close out the final 26 games of the first half with a .347 average and 19 extra base hits over that span.

Trailing 6-3 the Naturals came up with a big three run home run to tie the game and send it to extras. After lefty Matt Strahm struggled some in his five innings, allowing three home runs the Naturals came up big in the ninth to save him from a loss. It was Logan Moon’s three run home run in the ninth that sent the game to extra innings. In extras, the RoughRiders made an error on a Cam Gallagher ball that brought two Naturals in which allowed them to take the win.

Former 3rd round pick Colin Rodgers’ season in Wilmington continued with difficulties on Sunday, allowing seven runs on five hits and four walks in just two innings plus of work. The Rocks offense couldn’t muster much on their end in dropping their fifth game in six tries.

Not much went well for the Legends as the Greenville knocked around their pitching and kept their bats on ice. Going 0 for 7 with runners in scoring position while the pitching combo of Yunior Marte and Emilio Ogando were tagged for eight runs on nine hits gave Lexington their first losing series since late June. 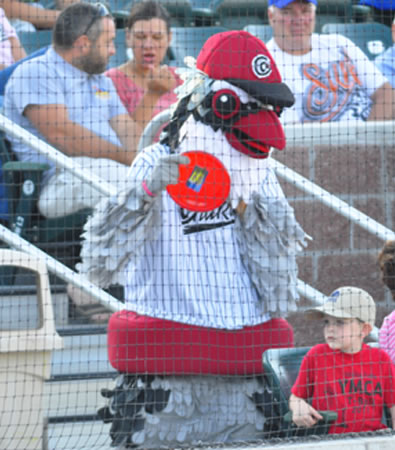 After being spotted a five run lead early, the Chukars pitching staff coughed it up to drop their fourth game in five tries. An RBI single from Manny Olloque in the first and a solo home run by Meibrys Viloria in the 2nd quickly gave Idaho Falls a 2-0 lead. The rest of the lineup would add on in the 2nd, getting three consecutive singles by and an error on a Luke Willis bunt to plate three more runs. Viloria would drive in Olloque in the fifth to push the lead to 6-3 before Orem plated six runs to take a 9-6 lead to the ninth. In that inning the offense would get rolling with a pair of singles by Olloque and Yeison Melo to get the inning started. An error would push Viloria into scoring position which he would score from on Nick Heath’s one out single to tie the game. That momentum was short lived however as Luke Willis would hit into a double play to end the top half of the ninth. An error by Ricky Aracena, his 13th, would put the leadoff man on and he would come around to score two hitters later after a sac bunt and a single to walk things off for the Owlz.

Trailing 4-3 the Royals used runs in each of the last four innings to takedown the Yankees in the first game of their series. Trailing 4-3 the Royals plated a two out run on a Nathan Esposito single sixth to tie the game and took 5-4 lead in the seventh off Emmanuel Rivera’s first home run of the season. The Yankees would tie the game back up in their half of the seventh but a the Royals plated three runs in the final two innings with Chris Devito driving the final nail with a two run home run in the ninth.