Breaking down the Royals prospects is definitely an inexact science. The development path of each player is different player to player as we saw in the late blooming careers of Danny Duffy, Whit Merrifield and Cheslor Cuthbert last season in Kansas City or the ascension of Matt Strahm into his bullpen role.  Still, every season I attempt to crack that nut during the last seven seasons (check out one of the first) on different websites.

Instead of giving you another boring list this season I thought I’d breakdown the prospects a different way. First, I’ll checkout the group that can contribute to the Royals in ’17. From there I’ll talk others that don’t quite make that group and finally onto the new wave. Those are the Royals prospects that I think are destined to help contribute to the rebuild of the organization whenever GMDM decides to tear it downa and build it back up.

BP Arm/Late season starter Matt Strahm – In my mind Strahm is the Royals best prospect just based off his spectacular run in the bigs last season. In short stints Strahm works 95-97 mph, but doesn’t dip much in his starting role, working in the 93-96 mph range. The control is considerably better than the other prospect that could be considered for the top spot even if the ultimate upside in my mind for Strahm is that of a #3 starter. Ultimately, what makes him the Royals top prospect in my mind is the “bulldog mentality” he brings to the mound as seen in his dominant pro debut. At worst, I think you saw what Strahm can be from the bullpen and with work from Eiland, I believe he has a chance to work into a mid-rotation role which is excellent from the left side after this season in the bullpen at the major league level. If the Royals make a move with Danny Duffy or Yordano Ventura, then Strahm’s role could change sooner rather than later. 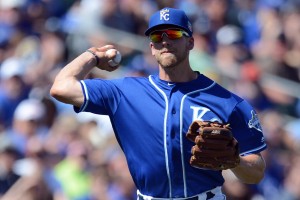 DH/OF/3b Hunter Dozier – I have been as hard on Dozier as any prospect ranker out there. For one, I’ve never been in love with the defensive profile at third base as he’s always seemed a little stiff with the hands for me at the position. The start of a move to the outfield this past season is a major positive as I believe he could be a Gordon-lite (you can’t expect anyone to do what Alex has done with the move) in right. The work ethic is very Alex-like and while I don’t think he has Gordon’s movement ability, he has enough athleticism and an arm to handle the spot. The Stephen F. Austin product would likely be an upgrade over what the Royals had in the spot during the ’14 & ’15 campaigns defensively with Nori Aoki and Alex Rios with some power upside.

That power upside is a possibility of a 40 double and 20 home run hitter with as much strength as any Royal in the lineup. In the past season, Dozier went back to a more upright stance, an up the middle approach with an adjustment to his hip movement and had his best season to date. Even more impressive is when you look beneath the numbers one can see that his Triple-A stats weren’t Werner Park (right-hand heaven) driven as he hit considerably better on the road than he did at home, 1.003 road OPS vs .672 at home. There is still plenty of swing and miss in his game, but the more controlled swing last season, combined with his natural strength, I think will drive his game to very similar offensive numbers with a little less defense as the guy I mentioned multiple times in the first paragraph.

BP Kyle Zimmer – This is short and sweet, but the stuff is still there and he’ll either make it this year or probably never. If the shoulder cleanup works, the Royals will have a nice spot starter/bullpen arm to add that works in the mid to upper 90’s with a 6+ curveball, 5 slider and a 4/5 changeup. If it doesn’t work, it will be the biggest letdown of the GMDM draft era.

Injuries could accelerate their role

Alec Mills – The stuff isn’t fantastic, but it’s average and while some like Erik Skoglund ahead of Mills, I’ll take the pitcher with the superior control. That control didn’t flash itself in his three major league appearances, but it’s a small sample and easy to write off. The facts remain that he has an average fastball that he can run in the 91-94 mph range with plus control. Along with the fastball, his changeup, slider and curveball are all average offerings.

The only hiccup that Mills flashed in the minors this year came during a stretch in which his neck was acting up and cost him a start as well as struggles in a couple of others. The righty has proven himself to overcome his prospect status his entire career and a few seasons as a solid back of the rotation starter in the majors seem within his reach. 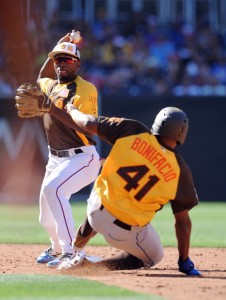 Jorge Bonifacio – The addition of Jorge Soler changed Bonifacio’s possibilities in 2017 despite a solid rebound like Hunter Dozier in ’16. Unlike Dozier, though, Bonifacio did it with the benefit of the friendly right-handed hitting confines of Werner Park. The righty hit 14 of his 19 home runs at home with an OPS 165 point better at home than on the road (.896 v. .731). The strikeouts (130) remained a problem as Bonifacio’s plate approach is still free swinging, but it was nice to see him flash some power.

On the defensive side, manager Brian Poldberg praised Bonifacio’s path to the ball, arm, and overall defensive ability, stating that he was the most consistent defensive outfielder they had in Omaha. One note that intrigued me in Poldberg’s explanation when I asked about his abilities is that Kansas City regularly has the best outfield coaching staff and preparation of any team in the league and Bonifacio would be prepared and positioned correctly by that group to excel even if the foot speed is just average.

Much like this year’s breakout performer, Cheslor Cuthbert, it’s easy to remember that Bonifacio is just 24 years of age and can still develop some at the major league level if given an opportunity.

Cam Gallagher – I’ve long been higher on this catcher than other publications and websites for his ability to do things that managers love behind the dish. The big second round pick from the 2011 draft calls a solid game and is an excellent receiver with good footwork despite his size. On top of that, he was able to put things together this past season to control the running game to the tune of a 48% caught stealing rate. The struggle has always been his less than ideal power at the plate, something that was supposed to be a calling card when he was drafted, but after working with Brian Buchanan this past season some strides were made there. The 6’3 230 lbs catcher went to a more upright stance after a poor April start which helped him put up a .295/.380/.424 slash line from May to early August before an injury hampered him down the stretch. That line isn’t spectacular, but it is much more useful and should solidify his future backup role if he handles Triple-A Omaha in a similar fashion this season. The Royals re-signing Drew Butera while simultaneously granting Tony Cruz a release shows signs that they are at least considering Gallagher as the third option in Omaha. That could change before opening day, but as it stands currently it appears to be Gallagher’s spot to have which means he’s just a Butera or Perez injury away from the bigs.

Another step forward needed to help out in 2017 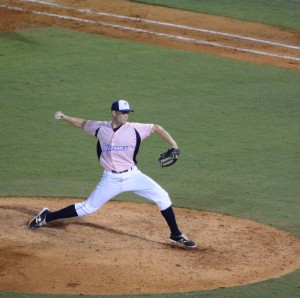 Josh Staumont – I was present for one of Josh’s best starts of the ’16 season, and the second of what became routine down the stretch for him, as he helped push the Naturals into the Double-A championship series. In fact, from August 21st through the playoffs, Staumont put away 53 hitters in 34.1 innings over his six starts while allowing just six earned runs in that time.

The righty does this with a fastball that works from 95 to 100 mph that comes from a slow and deliberate windup as if he’s just playing a game of catch in the backyard. In addition to that, he adds a wipe-out curveball that showed better control than his fastball. Typically, he can spot the curve on both corners or dirt it to get a swing and miss. The pitch works in the low 80’s (quite a bit of velo for a curve) into the high 70’s and truly is a great #2 pitch with the chance of becoming a 70 future offering to go with the 80 grade fastball. Currently the changeup (with a split grip) is a distant offering with a bit too little movement even if the arm speed is similar. At it’s best, it offers some dipping action, but more than likely he’s going to have to chuck it for a more conventional changeup grip. Perhaps some work with Danny Duffy during spring training could help him get to a usable pitch. If Staumont settles with a fastball, both two-seamer and four, and a curve while improving his control he could be a Guthrie-esque 3/4 starter or a dominant back-end bullpen piece. The best case scenario is another step in improved control and an additional third pitch that gets him to that #2 starter spot.

Given the history of pitching development, there is little reason for me to believe he will make that step. As more of a cerebral pitcher, I don’t know if he has the personality to be a dominant back of the rotation arm even if he has the tools that should shine in that role. Time will tell, but arms aren’t like this aren’t falling from the sky, which is a good spot for KC.

Andrew Edwards – Size and fastball are what Edwards brings to the table with the 6’6 265 lbs righty running his fastball in the 98 mph range at times during the Omaha season. The fastball features plenty of life, getting swings and misses at nearly a 11 per 9 clip this past season. Unfortunately with that size comes a lack of body control and less than ideal control and command from the reliever, walking 6 per 9 at Triple-A Omaha. The fastball is paired with an average slider that he works in the low 80’s, inducing some swing and misses along with some weak contact. After a tremendous start in his first 15 games at Triple-A the righty found trouble in his last 27 outings, giving up 25 of his 26 earned runs allowed in that time as the control wandered. The control needs to be refined, but the fastball and slider should be enough to give him a shot as a reliever and possible setup man to a closer in the bigs someday. Expect him to head to Omaha after a quick audition for the big club in spring training.

Jake Junis – A huge step forward in his game occurred for the Royals 2011 draft pick as Junis put up an All-Star level performance at Double-A before getting promoted to Omaha. Working in the 90-94 mph range with his fastball, Junis has developed three secondary pitches to go along with his primary pitch. The control is solid and those secondary offerings in his curveball, slider and change up all present as average pitches. Like Mills, Skoglund, and few others, Junis needs to find another tweak here or there to tip up one of the pitches to get it into a “go-to above average pitch”. Even if the pitches don’t improve Junis still stands with his control, athleticism and sturdy frame as a possible back of the rotation starter.

The 464.1 innings Junis has pitched the last three seasons is the most in the Royals organization by a minor league pitcher in that time.