Since moving to the unbalanced schedules, a team’s success can easily be determined by how they perform against divisional opponents. That isn’t to suggest a team can’t overcome some poor intra-divisional records, but when you’re competing for a playoff spot with those other teams, every win has twice the impact. A Royals win against the Tigers means one more win for Kansas City, and one fewer win for Detroit.

Last season, the Royals actually had quite a bit of success against most of the Central Division. They went 14-5 against the White Sox, 12-7 against the Tigers, and a dominant 15-4 against the Twins. That’s a combined winning percentage of .719. That’s really good! Over a 162-game season, that winning percentage would result in 116.5 wins, which would not be a record, but it would be weird because portions of wins don’t actually happen. Still, it was impressive what the team did against those three rivals.

The problem, of course, is that there are four divisional opponents, and against the Indians, the Royals were a measly 5-14. Granted, the Indians were a very good team last year, and the Royals were, well, not. You would expect to see a losing record in that series, but the Royals were completely obliterated.

Part of the problem is that the Indians’ pitching staff is one of the more groundball-heavy staffs in the league. In fact, the Yankees were the only team in the AL last year with a higher groundball rate than the Indians, with both teams right around 47.8 percent. While none of their starters were extreme sinkerballers, all five of them had a groundball rate of at least 45 percent, with only Josh Tomlin hovering just below it. Add in a few relievers who specialize in getting worm-burners, and you can see how the numbers make sense.

The Royals struggled mightily against groundball pitchers, posting a .670 OPS in 966 plate appearances. The league average OPS against groundballers was .742, to give you some perspective. There were a few reasons the Royals stubbed their toes against the Indians last season, but the offensive woes sit at the top of the list.

Which brings us to Brandon Moss.

The reason for this is Moss’ swing path. He does an excellent job getting loft on the ball by using a bit of an uppercut swing. While this can leave him vulnerable to high heat, it can often result in squaring up pitches with more of a downward trajectory, like those that will typically lead to grounders.

Moss has done some significant damage on pitches in the lower third, as you can see by this colorful image: 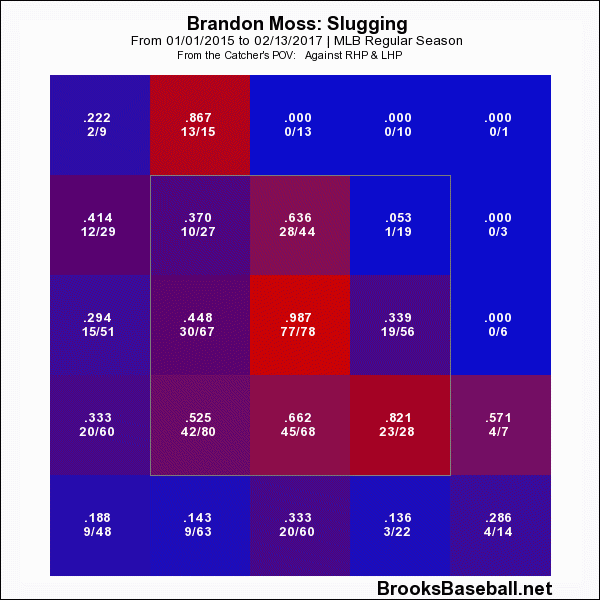 Clearly he has a hole in his swing up and in, but when he is able to get his arms extended, he can crush some baseballs. According to data from Statcast, Moss slugged .731 on at-bats that ended with a pitch in the lower third last season, which ranked 19th among 315 batters with at least 50 such at-bats. And that’s important, because as a team, the Royals slugged .487 in those at-bats last season, ranking 19th in baseball.

Now, it’s possible Moss finds himself in more of a platoon role, but fear not! The Indians rotation, as it looks in mid-February, will be entirely right handed. Granted, several of their pitchers will inevitably find themselves on the disabled list at some point, but even if Moss is platooned, he’d likely start every game against Cleveland.

Moss slugged .828 on pitches in the lower third from righties in 2016, and while that’s not a large sample, his swing suggests he should continue to crush right-handed pitching if they challenge him down in the zone. As it turns out, roughly 13 percent of the pitches thrown by Indians pitchers were thrown by righties AND ended up in the lower third of the zone. No AL team had a higher rate. Moss will have plenty of chances to reverse last year’s trend in those rivalry games.

It’s also worth noting that the man Moss is replacing, Kendrys Morales, hit a gentleman’s .164 against the Indians, with all of three extra-base hits in 69 plate appearances. Morales clearly wasn’t the only problem, but if he hit closer to his season line, particularly in some of the high leverage situations in those contests, perhaps the Royals steal another couple of games from the division winner. That wouldn’t have caused the two teams to swap places in the standings, but if the Royals have a couple extra wins earlier in the season, maybe they make a move at the deadline, or maybe they play with a bit more urgency before August. I’ll grant that this is getting into meaningless speculation, but Spring Training is here, so the time for meaningless speculation is dwindling.

The Royals probably haven’t caught up to the Indians this winter. The gap between the two teams last season was significant. However, it does look like the gap has narrowed, especially with the addition of Moss. The rest of the lineup will need to step up as well, but not many Royals have the ability to carry the offense against Cleveland quite like Moss can. His powerful swing will be a major key to staying in the playoff race within the division.

1 comment on “Closing in on Cleveland: The Importance of Brandon Moss”