Heating Up in Omaha – Winter quickly flew through the midwest this year leaving near 80-degree temperatures this past weekend. Things don’t look like they will cool down anytime soon for the Storm Chasers who could present quite the rotation for the Triple-A Royals squad. With an excellent spring to date, Josh Staumont may have locked down a spot in the Chasers alongside Jake Junis and Luke Farrell. The Royals could also use Kyle Zimmer in that rotation for Omaha with lefties Eric Skoglund or Jon Dziedzic filling out the fifth spot.

A top two of Zimmer, who is currently assigned to NW Arkansas, and Staumont would give Omaha their best twosome since June of 2013 when Danny Duffy and Yordano Ventura were fronting a rotation that would eventually win a PCL title.

Race Back On – Despite Raul Mondesi’s outstanding spring, his lingering back problems have re-opened the door open for the second base competition. With that opening, Christian Colon took advantage, going 5 for 9 through Saturday with a home run and a double. That home run was the first spring home run of his career which seems amazing considering the light air that Surprise and other Arizona sites offer. Should Christian or Whit the second base job the Royals could keep Raul in Omaha for much of the year, gaming service time should he stay through July while also helping him refine his pitch recognition and plate approach. 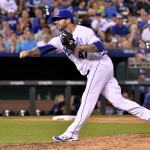 Final Bullpen Spot – After learning he had diabetes, Scott Alexander has adjusted his diet and turned back into the pitcher that I thought he could be a year ago. A lefty with a good slider and fastball, Alexander is giving Peter Moylan, a very reliable pitcher a year ago, one heck of a battle for that final bullpen spot. With a lack of a 40 man spot opening up unless the Royals make a trade it could prove difficult for Moylan to earn a spot on the Royals opening day squad. With an opt-out date of March 28th available what may decide Moylan’s fate is the battle for the fifth rotation spot as much as his personal battle with Alexander. The Royals bullpen as it stands would be lefty heavy should Nathan Karns secure the fifth starter spot, leaving a possible bullpen of Herrera, Strahm, Soria, Wood, Young, Minor and Alexander. Having a heavily lefty weighted pen versus the Indians would be nice but against teams like the Twins, Tigers and White Sox it could leave the Royals at a disadvantage considering the majority of those team’s power hitters dig in the right-handed batter’s box. Finding a spot for Moylan and his .583 career OPS versus RHH is something the Royals most certainly should be seeking.

Khalil’in it – We are starting to see more and more buzz about Royals 3rd round draft pick Khalil Lee with tweets like these from BA writers J.J. Cooper and Bill Mitchell.

We here at BPKC have been driving the Khalil Lee fan bus since his selection with the 103rd pick last year. More and more of the national writers are starting to come around now and a likely assignment to Lexington, a good hitting environment, while still not even 19 years old should do nothing to temper expectations. There are a couple of intriguing questions to look for in regards to Lee should he break with the Legends.

Do the Royals widen his stance? This is something the Royals have done with a few prospects and while it leads to a more balanced swing, I believe it also saps the explosiveness. If Lee maintains his current patient approach then I see no need to make any changes in his swing until proven different.

How often does he play center? The Royals have moved Marten Gasparini to center field, a spot better suited to his athletic ability and limited baseball background. Will this limit Lee’s playing time in the more premium defensive spot?

Center of Attention – Rustin Dodd of the Kansas City Star tweeted out some good information on Donnie Dewees chances to play center field the other day. While a seemingly innocent comment to some, Dewees ability to play center would be a revelation to the organization that lacks playable depth at the premium position beyond Paulo Orlando in 2018. When the Royals made the trade for Dewees, most reports said the speedster with plus speed that lacked the arm to play the position, leaving him as a corner outfielder that lacked pop. If Dewees can handle center then his career prospects take a major step up.

Lacking in Locals – A year removed from a stellar local prep class, the ’17 version is lacking in MLB prospects. At this point, it is extremely doubtful we see a local prepster in the Top 150 picks of this year’s draft. The top “local” selections appear to be college talent in Missouri’s Tanner Houck, local guy via LSU, Alex Lange, and big slugging Jake Burger of Missouri State. The Royals aren’t a favorite to select Burger with the 14th pick, but that doesn’t mean he can’t swing it, hitting .351/.444/.784 entering Sunday’s game with 9 home runs.

Not quite a local guy is Iowa Western’s talented lefty Dan Tillo. A former Iowa Mr. Basketball who works in the 91-93 mph range with his fastball while tossing a low 80s slider that earns plenty of swings and misses (32 in 20.1 IP) at the JUCO level. Lefties that register in at 6’5 235 lbs. with athleticism aren’t everywhere in this game and should intrigue the Royals with a possible buyout of his Arkansas commitment.

Transactions – The Royals traded Brandon Dulin to the White Sox for a player to be named later or cash consideration. The first baseman from a Kansas City JUCO and Lee’s Summit North high school, Dulin hit .258 with 8 home runs in 2016 between Lexington and Idaho Falls after being selected in the 12th round of the 2013 draft.

Reliever Brandon League was released from his minor league contract on Sunday by the Royals. Along with the bullpen crunch at the major league level, the Royals will face critical decisions between the quality of pitchers they have at Triple-A and Double-A. Do they keep multiple minor league signees and push a pitcher or two back to High-A when they deserve a spot on the NW Arkansas roster? How does that affect his development in the future? These are the decisions that organizations are faced with prior to and during the season.