Just three games on the docket with the Royals affiliates coming out on top in two of them. 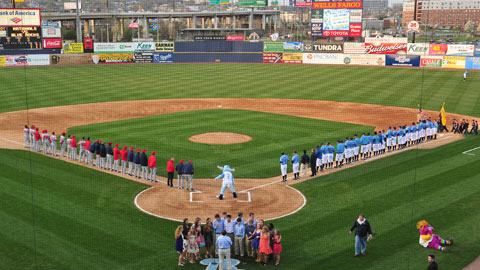 The Blue Rocks fell behind in the first inning of the first game of their homestand only to walk things off for a win.

One week after posting a career-high in strikeouts, the Blue Rocks again received excellent pitching from Foster Griffin. The former 1st round pick set a new high in innings completed in a start by getting through eight in this one. The Nationals didn’t make things easy for Griffin, getting after him for two runs on a walk and two hits in the opening frame, the second of which was a two out double off the bat of Austin Davidson. After allowing a leadoff single to start the second, Griffin found his cruise control, not allowing another hit the rest of the game and allowing just three hitters, one via a strikeout-wild pitch, to reach base safely.

The zeros Griffin was putting up allowed the offense to tie the game in the third on Chase Vallot’s two out single that scored Nicky Lopez and catcher Nathan Esposito. From there the game went scoreless until the bottom of the ninth when the Rocks loaded the bases with a Cody Jones single and walks to both Lopez and D.J. Burt. In stepped the Carolina League hitter of the week, Elier Hernandez and the former international bonus baby delivered with a one out hit to right to bring home Jones and start the celebration for Wilmington.

The Naturals made quick work of the Travelers, finishing off the third game of their series in just two hours and eighteen minutes.

A team of three pitchers held the Angels Double-A affiliate’s hitters at bay with just nine hits allowed and just a solo home run as the only damage off reliever Luis Rico. Starter Matt Tenuta worked six quality shutout innings with just 82 pitches thrown while striking out four against no walks allowed.

The pitchers were backed by a pair of solo home runs by Frank Schwindel and  Zane Evans, sandwiched around a Schwindel sacrifice fly to drive in Alfredo Escalera in the fourth inning. The offense only collected five hits on the day but made the most of them with their two home runs.

The Salt Lake Bees singles train got up and rolling against Eric Skoglund and the Omaha Storm Chasers once again on Tuesday afternoon.

The lefty gave up seven runs (6 ER) in just five innings of work as Salt Lake used eight singles, three via the bunt, over those innings to pile up five runs before a two-run home run by Nolan Fontana in the fifth expanded their lead to 7-0. A second home run by the Bees came in the sixth off of reliever Kevin McCarthy to push the lead to 9-0.

For the eighth time in twelve games, Omaha was limited to two or fewer runs, scoring just one run on five hits.