The Royals conclude their West Coast road swing with a four-game set against the Angels, who have survived surprisingly well without Mike Trout but are probably realistically not more than an average team even with him in the lineup. Still, their record is better than that of the Royals, so this has to be seen as at least something of a tough series, especially considering it’s on the road. Amazingly, the Angels have been kept afloat partly by Eric Young, Jr. of all people, who is hitting the ball better than he ever has before. Their starting rotation is rough, but they have gotten solid relief work from a quartet of 32-year olds having nice seasons. 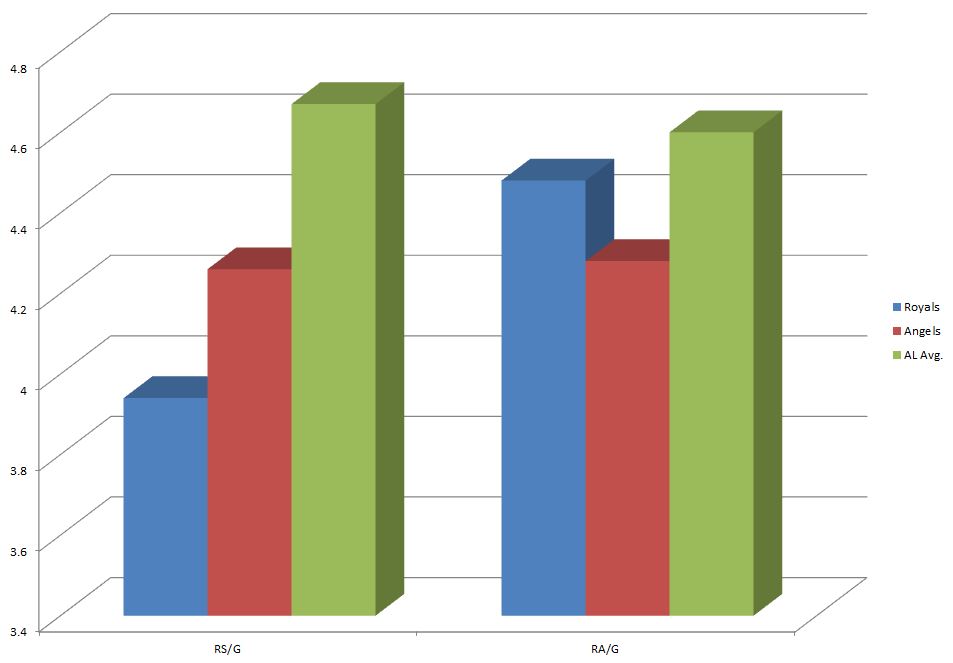 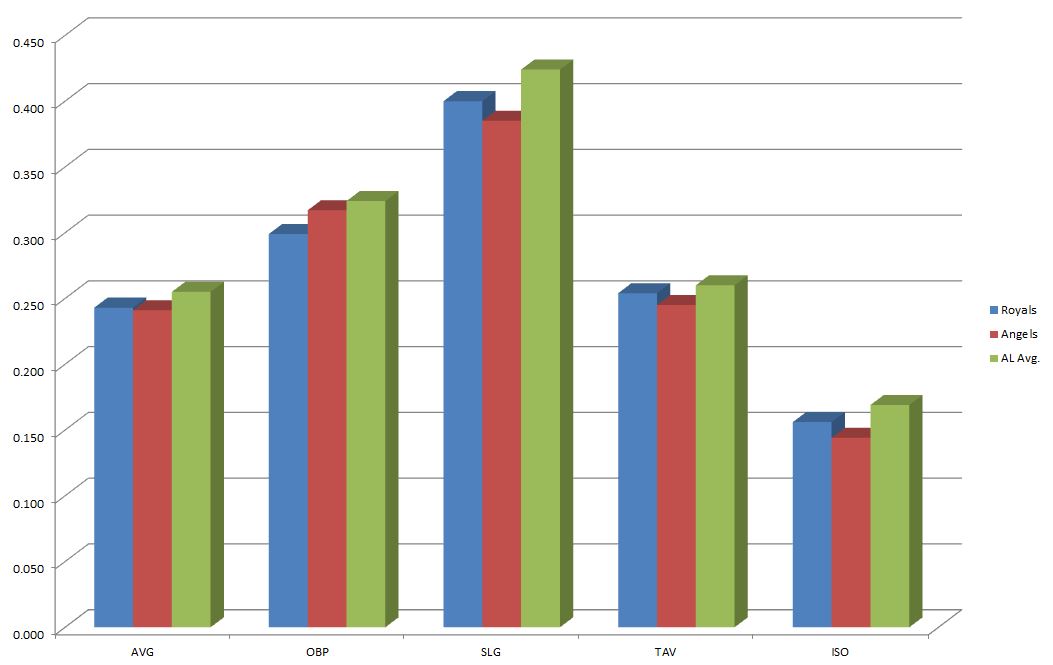 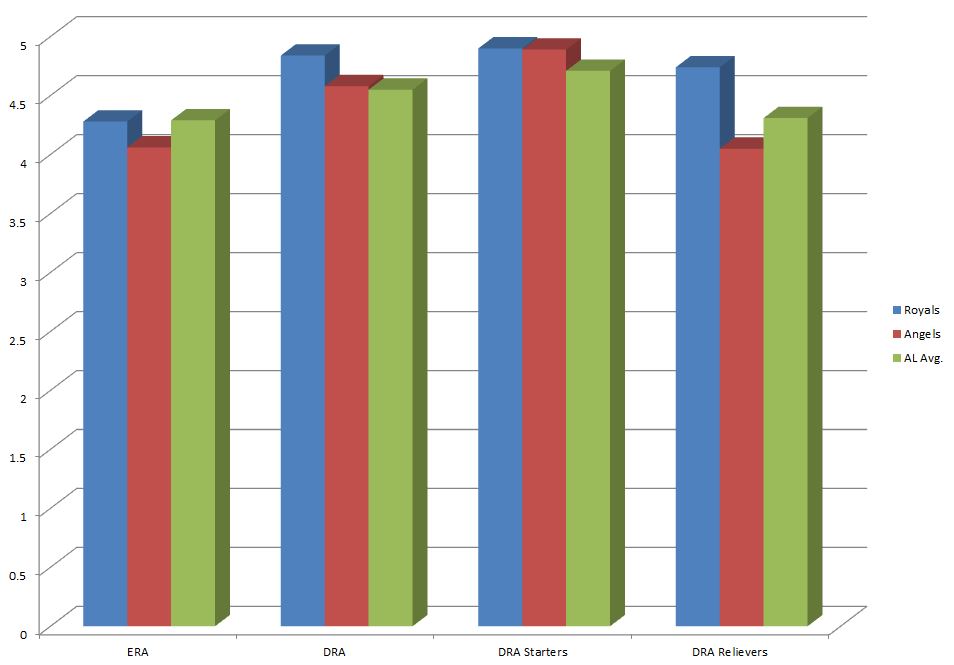 Acquired from the Twins last year in the midst of a bad contract, Nolasco was actually good for the Angels in 73 innings. This year, he’s also thrown 73 innings. The result isn’t quite as good. His big issue has been the long ball, allowing 19 of them already, which bodes well for the Royals as a team that is actually capable of hitting some home runs. The good news for the Angels is he’s a free agent after the season.

Nolasco has struggled against both righties and lefties, but righties have actually hit him harder with a .290/.322/.587 line compared to .279/.338/.497 against lefties. In 17 less plate appearances, right-handed bats have hit five more home runs. A big reason for that is he is mostly sinker/slider to right-handed hitters and the slider has been battered. The biggest culprit overall is still his four-seam fastball on which he’s allowed a .340 average, a .943 slugging percentage, and nine home runs in 53 at bats that ended on it. A lot of Royals hitters don’t have issues with a decent fastball, which is all Nolasco’s is at this point, so I think they should be able to continue scoring some runs in this one. And if they do struggle early, he’s allowed a .314 average and a slugging percentage well above .500 after he gets through a lineup the first time.

Strahm will be making his first ever start and will be limited to 65 to 70 pitches. He’ll likely be piggybacked by Eric Skoglund unless he can make the absolute most of those pitches and get through five or even six. That seems unlikely given his command issues this year with 18 walks in just 22 innings. I’m very curious to see how his stuff plays when the velocity likely needs to be dialed back a touch. I think back to his outing against the Padres on Friday night when he struggled heading into his third inning of work. Maybe it’ll be different knowing he’s out there for awhile, but we’ll see.

When the A’s tried Chavez in the rotation a couple years ago, I thought it was kind of ridiculous, but he made a solid transition and gave them some quality starts over the next couple seasons. Last year, he worked exclusively as a reliever with the Blue Jays and Dodgers, but he signed with the Angels and has had a chance to get back to starting. He’s given them a decent amount of innings, but his strikeout rate is in steady decline and he’s not fooling anyone with 17 homers allowed.

His fastball velocity is down a good chunk from last year, which is no surprise, and it’s been destroyed at a lower velocity. He’s allowed a .305 average and a .720 slugging percentage against it, which, again, bodes well for the Royals as a team that has some power and can handle a mediocre fastball. Right-handed bats have especially had their way with it, so I’d look for some fireworks from guys like Jorge Bonifacio, Lorenzo Cain and Salvador Perez. A big issue for Chavez has been that once he gets runners on, he’s completely fallen apart. With nobody on, he’s allowed a .236/.300/.422 line, but with men on, he’s allowed a .318/.371/.659 line. If you think that’s bad, his line with runners in scoring position is even worse at .406/.459/.906. It gets ugly and it gets ugly fast. It’s a wonder he’s been able to give the innings he has.

Last year, Ian Kennedy was 4-2 with a 3.03 ERA through his first 10 starts. He had a couple rough outings, but he was generally very good. Then he had a 10 start stretch where he went 2-6 with a 5.89 ERA. That was a rough period. This year, Ian Kennedy had a 2.30 ERA through his first five starts before he was injured during a game against the White Sox and then came back without a rehab assignment. Since the game he got hurt, he’s gone 0-4 with a 9.24 ERA and just exceeded five innings for the first time in his last start. For the Royals sake, they better hope he turns it around like he did last year.

Meyer has bounced around a bit, getting traded to the Twins for Denard Span and then to the Angels along with Nolasco in exchange for Hector Santiago. He was called up mostly out of need and has been okay enough. The ERA isn’t bad, but he’s walked 6.5 per nine innings. He has struck out a ton of batters, so that’s something to build on, but he’s certainly a pitcher who can be beat.

Meyer throws fastballs very hard. Average velocity on his four seamer is 97 MPH and on his sinker it’s just under that. The problem is he often doesn’t know where the four seamer is going, and he uses it a lot more when the batter is ahead in the count, so a good rule of thumb is if it’s too fast to hit, don’t worry, it’ll probably be out of the strike zone. Patience isn’t a strong suit of the Royals, but it is for a few guys like Brandon Moss, Alex Gordon and sometimes Hosmer and Bonifacio, but patience is extremely vital against Meyer. When he’s behind in the count, opponents have hit .370/.605/.587, but when he gets ahead, they’ve hit just .136/.136/.186. That’s a stark difference.

Junis was able to give the Royals exactly what they needed in his last start, pitching into the eighth inning. This lineup is a little more daunting than the Padres, so I don’t expect the same kind of success. If he can continue to limit the walks like he did on Sunday, that’ll help. What is in his favor more than anything, though, is that Angels hitters seem to struggle with fastballs. Only Young, Simmons and Pujols have been above average against them with Espinosa, Escobar, Maldonado, Calhoun and Maybin really struggling.

When Ramirez took the hill in Kansas City on April 14th in the bottom of the first inning, he had never made a big league start. He hadn’t made a start of any kind since 2011 when he posted a 4.50 ERA in Double-A. He wasn’t very good against the Royals, allowing five runs in five innings of work. And that was in April, so it translates to about 14 runs in five innings against a decent offense. But since then, he’s posted a 3.74 ERA in 11 starts and averaged better than six innings per start. Not too bad at all.

There’s always a question if velocity will hold when moving from the bullpen to the rotation. With Ramirez, he’s still throwing his fastball at 97 mph and his sinker at 95-96. His slider has been a nice strikeout weapon, but he has hung it a few times to allow three homers against it. He pitches righties and lefties differently, relying on his slider more to right-handed bats and rarely throwing the curve, but he throws a ton of curves to lefties. The slider is the better pitch, and that explains his big platoon splits. I expect maybe Whit Merrifield will get a day off in this one to get another lefty bat in the lineup against Ramirez to hopefully get to him for a second time this season.

Vargas gets a chance to face his former team close to where he graduated high school and went to college. He’s coming off another fantastic outing to lower his ERA to 2.10 and to earn his ninth win against the Giants. He’s always been historically good in Anaheim with a 2.87 ERA in 135 career innings, but he hasn’t pitched there since 2015. One of the big things I’ve been tracking with Vargas is his swinging strikes and, while they’re not at the levels they were in April, he’s gotten nine in each of his last two outings, so he might be getting the feel for that strikeout pitch back again. Hopefully he can notch his 10th win of the year.

I like the way the Royals are playing and the Angels are a pretty good matchup. They aren’t a bad team, but they aren’t special and the Royals should be able to do some damage against both Nolasco and Chavez. I’m going to take the safe road and say they split this series, but just know I was very tempted to predict three of four.

Tags: Ian Kennedy, Jake Junis, Jason Vargas, Matt Strahm |
David Lesky
Follow @dblesky
I've been a Royals fan since the day I was born, and have had the opportunity to write about the Royals for nearly a decade now. The winning was better than the losing, but the losing is kind of familiar at least.
read more from David Lesky