Here come the Blue Jays. Tell me if this sounds familiar. After a terribly disappointing start, a team with playoff aspirations has played well enough to get themselves back into the AL Wild Card race because of a truly mediocre middle class in the American League this season. The Blue Jays were 2-11 through 13 games and 8-17 in April. They were climbing, but lost five of six in May to fall back to eight games under .500. Since then, they have been playing decent baseball to climb into the race.

The Blue Jays offense isn’t prolific like it used to be. Troy Tulowitzki is a negative contributor. Jose Bautista has been better, but his numbers are way down. Josh Donaldson and Justin Smoak have carried this offense with Kendrys Morales getting an honorable mention. The starting pitching has been lackluster outside of Marcus Stroman (well, before yesterday), but luckily for them, the bullpen has done the job for the most part. 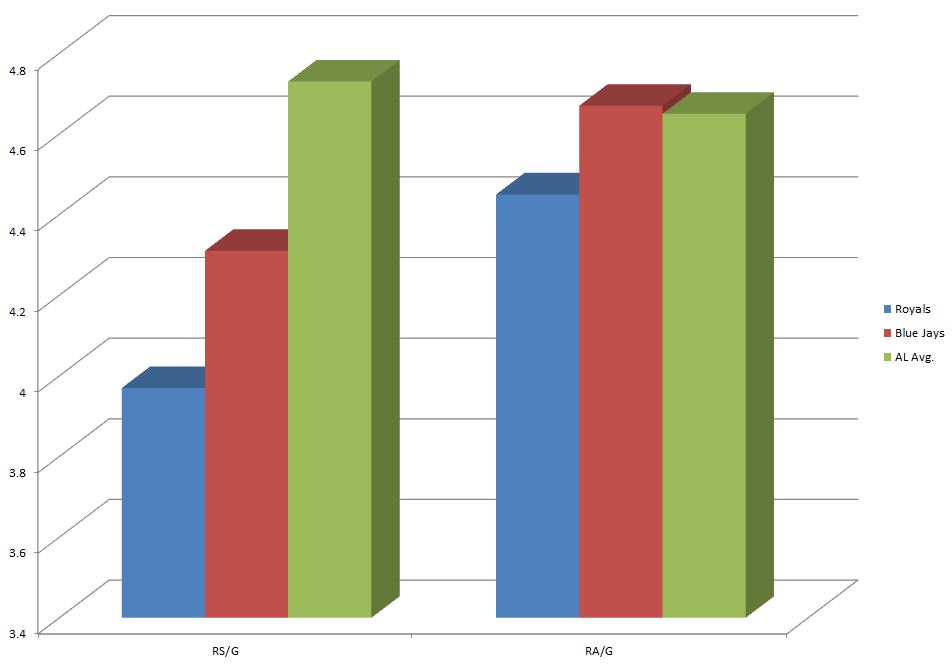 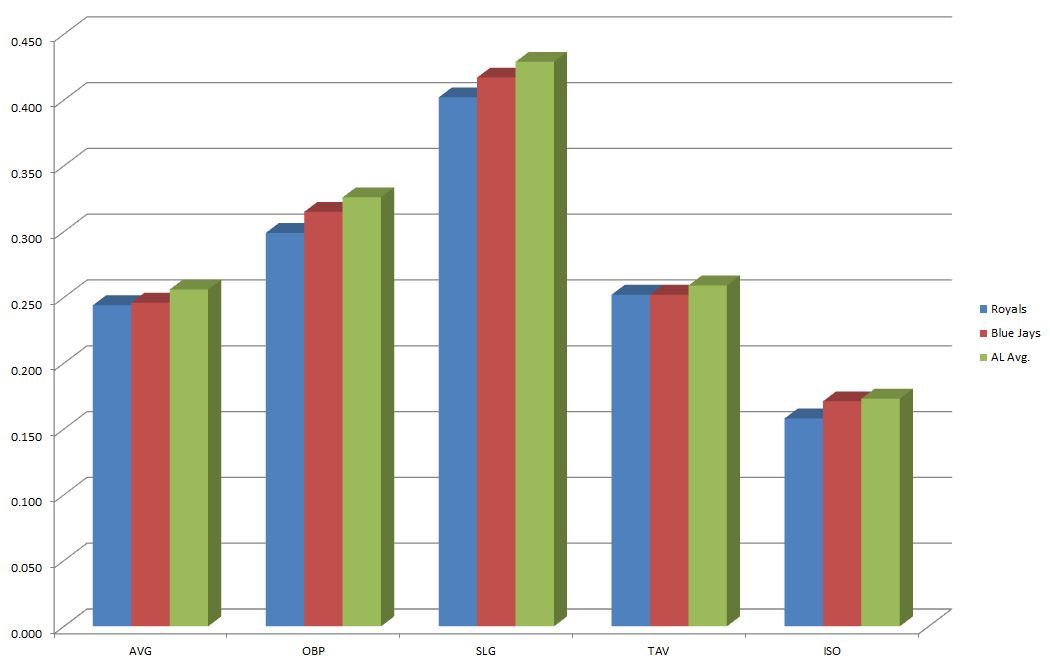 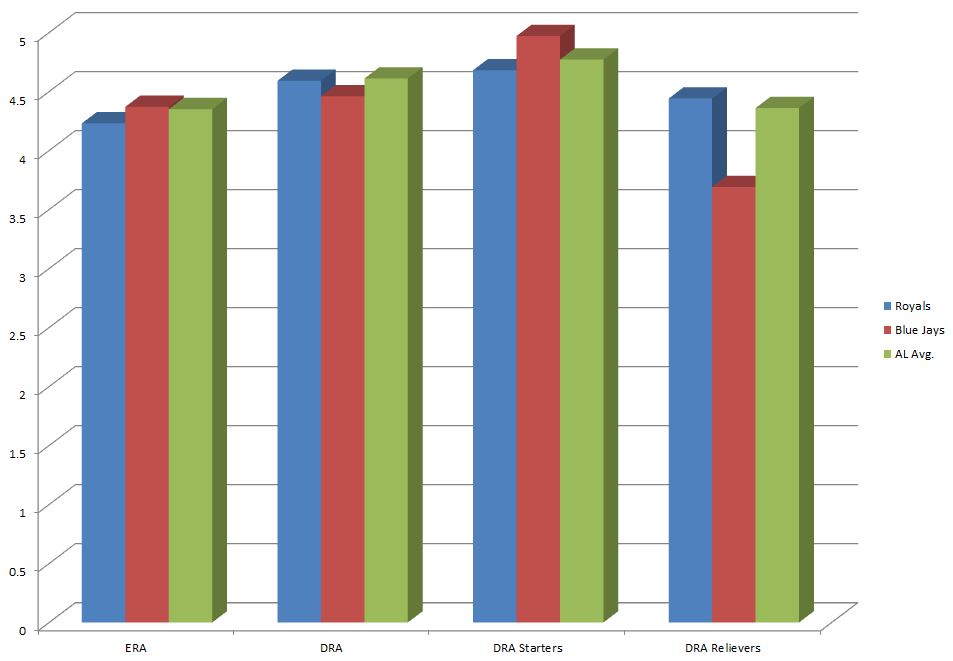 Before I talk about Happ the pitcher, I have to mention something I’m probably late on, but I realized recently that the pronunciation for J.A. is “Jay.” That blew my mind. Anyway, after being saved in Pittsburgh and signing a nice three-year deal in Toronto, Happ had a great first season, finishing sixth in the AL Cy Young race. This year has been a bit different. He’s giving up many more hits while striking out way more and walking less. Of course, there’s an injury sandwiched inside his season too, so maybe he’s just now rounding into form and the Royals are in big trouble.

Happ relies mostly on a couple fastballs, so that’s something that the Royals should be able to hit if they’re going to hit him. It’ll be interesting to see if he breaks out the curve a little more given the Royals recent trouble against that pitch. He’s only thrown it about six percent of the time this season, but a smart pitcher might up that, at least early, to see what’s what. The sample is small, so take it with a grain of salt, but he’s allowed a .348 average to lefties this season with a .783 slugging percentage. Righties are doing basically the same as last year, which is to say not great, but lefties, man, they’re crushing him. Like I said, it’s 23 at bats, so there’s not a ton to glean from it, but it’s worth noting given the Royals left-handed power bats they deploy most nights.

With injured pitchers beginning to throw, Junis looks like he might be in a fight for his rotation spot over his next few starts. He was okay in his first start and then got rocked by a very good Houston team. Then he took care of business against a very bad San Diego team. And then he was hit fairly hard by a mediocre Angels team. There was one really encouraging sign. He got 15 swings and misses against the Angels, and that’s a team that doesn’t swing and miss that much, so if he can carry that over, he should be able to miss some Blue Jays bats and pitch well.

Estrada has had a really weird career. He was a non-prospect and then kind of a mop-up guy with Milwaukee before he got his chance to start and was pretty good. Then he gets traded to the Blue Jays, likely to be a swingman and he finishes 10th in the Cy Young votes before turning in another quality season last year. Then this year, he goes from seemingly unhittable (6.7 hits per nine in 2015/2016) to allowing 10 hits per nine, but upping his strikeout rate by a ton. Weird things are happening in Toronto.

There is nothing fancy about what Estrada does on the mound. He throws a lot of fastballs with a ton of movement and then throws a changeup that, when right, is ridiculous. He mixes in a curve and cutter, but those are just window dressing. Like Happ, I do wonder if he’ll feature the curve more against the Royals. For some reason, it sure seems like Estrada has faced the Royals more than twice in the regular season, but it was just two starts in 2015. He was fine in them, giving up four runs in 12.1 innings and striking out just five. He’s around the strike zone, so I wonder if the Royals can take advantage of that, given their disdain for the walk. On at bats ending on the first pitch, he’s allowed a .359/.375/.641 line and on at bats that included a first pitch swing, he’s allowed a .321/.325/.652 line. The Royals might actually do well to swing early and often.

Vargas wasn’t great in his last start against the Angels, but he was great enough to temporarily stand alone atop the wins leaderboard in baseball. He’s now tied for first, but I guess we’ll accept that. The Blue Jays were once a terrible matchup for lefties, but that’s different now, though there’s still some fear in facing Martin, Donaldson, Smoak, Bautista and Morales. They have plenty of power from the right side, so Vargas will need to have his changeup on point in this one to get the job done.

Liriano rounds out the weekend of some interesting pitching stories for the Blue Jays. He never really became the pitcher we all thought he would after 2006 because of injury, but he turned in three really good seasons for the Pirates before cratering last year. Then, after a change of scenery trade sent him to Toronto, he took off again. Now he’s pitching to the numbers you see above. He still gets strikeouts, but he also still can’t control where any of his pitches are going.

He’s heavy on the two-seam fastball, but the ground balls aren’t coming like they once did, which is part of why he’s having struggles this year. His slider is still the dominant pitch, which might give the Royals some troubles. If you’re looking to see a Mike Moustakas home run, it’s certainly possible because a slider can hang up and he has hit three homers off them this year, but he’s also hit just .171, so he might struggle against Liriano. Lorenzo Cain and Whit Merrifield, though, seem like guys who should be able to handle him as they’ve hit both fastballs and sliders well this season, so they have him covered. While he doesn’t really have a good stretch of pitching in his splits, he starts to allow the long ball after about the 50th pitch, having given up five of the seven in 102 plate appearances after reaching that plateau. Hopefully pitch 50 comes in the third and not the sixth in this one.

Hammel has been outstanding in June. He’s gone 27.1 innings in four starts and allowed just seven runs on 24 hits and has walked only one batter. So yes, his WHIP this month is below 1.00, which is quite the departure from what we saw earlier this season. He’s also recorded double digit whiffs in three of his four starts, which is nice to see. The Blue Jays who have faced him a fair amount have struggled against him, and he’s only allowed a homer to Martin. This matchup concerns me a bit, but the history is good for Hammel against the Blue Jays.

Maybe I’m feeling a little extra chipper after the way that Red Sox series ended, but I think the Royals take another series, winning two of three. I also think the Royals are the better team here. That’ll get them back to .500 and will be a nice stepping off point for a run at a playoff spot.

Tags: Jake Junis, Jason Hammel, Jason Vargas |
David Lesky
Follow @dblesky
I've been a Royals fan since the day I was born, and have had the opportunity to write about the Royals for nearly a decade now. The winning was better than the losing, but the losing is kind of familiar at least.
read more from David Lesky