After opening the season’s second half with 13 games against sub-.500 teams, the Royals face their first real test since the break when they head to Boston to take on the division-leading Red Sox. To sum the Red Sox up in a sentence, they’re riding a lot of lefty starters with a contact oriented offense short on power and a very solid bullpen to a trip to the postseason. Oh yeah, and Mookie Betts. They’re last in the AL in homers by a few but they get their hits, work their walks and score enough runs to support a very good starting staff that features the 2016 AL Cy Young Award winner as likely its worst starter. 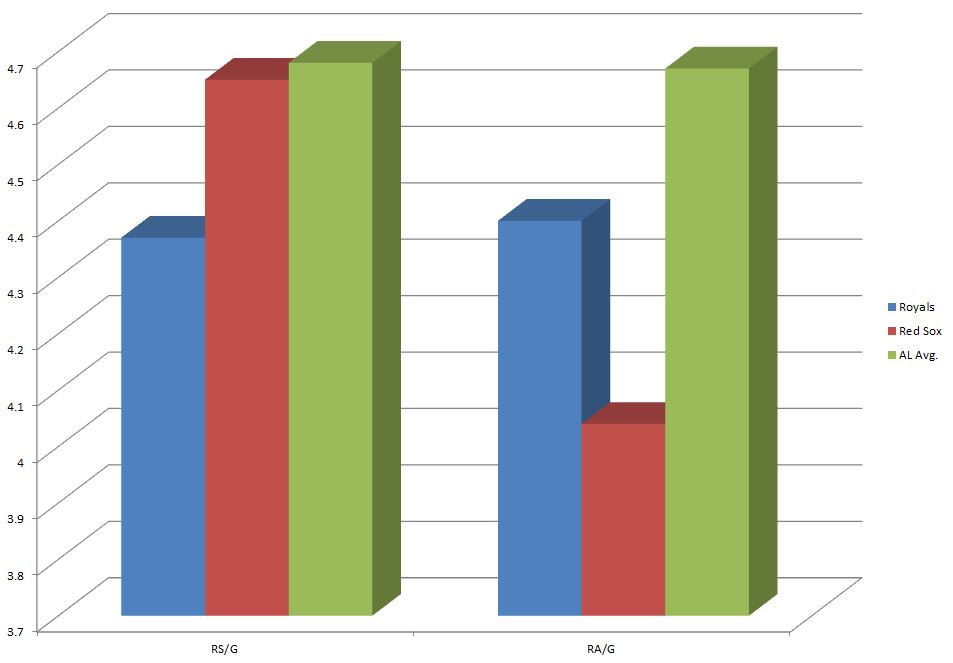 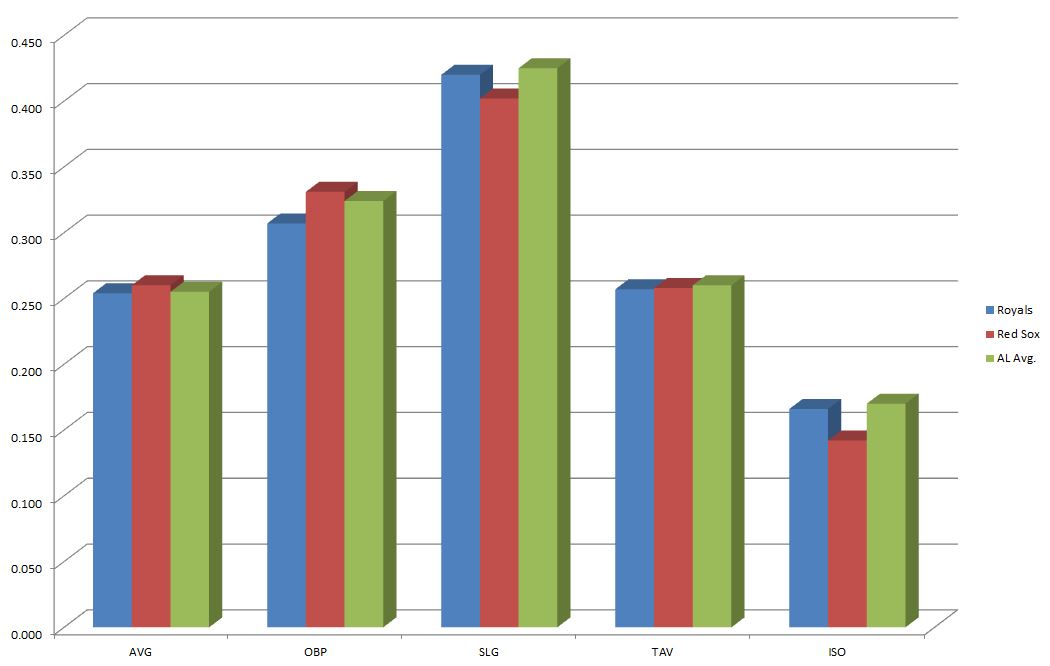 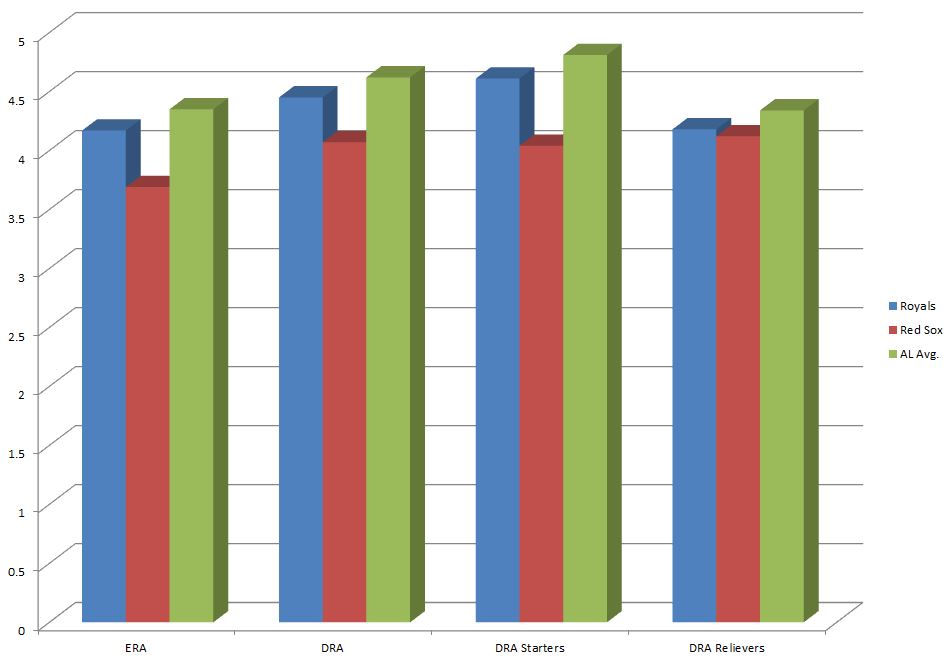 It’s been a mixed bag for Porcello in his three years now in Boston with a rough year to start followed by a Cy Young, now followed by a horrendous follow-up. The common denominator in his bad seasons are that he’s been getting hit like crazy while he was able to limit hits last season in going 22-4 with a 3.15 ERA in 223 innings. He’s still putting up solid strikeout numbers and limiting walks extremely well, so if he’s got it working, he’s still tough to hit.

He used to rely very heavily on a sinker, which he still throws, but not nearly as much. Now he uses his four-seam fastball almost as much and it’s a couple miles per hour harder. He also has a slider, curve and changeup. The slider is used mostly on righties and the changeup is reserved to get out left-handed hitters. Fortunately for the Royals he isn’t really getting anyone out, with an .842 OPS allowed to righties and .814 to lefties. While he’s been out of the division a few years now, some Royals still have a decent number of plate appearances against him, but the only one to do any serious damage is Eric Hosmer, who has a career .370/.455/.741 line against him in 33 plate appearances with three home runs. With all those strikes he throws, the Royals would do well to go first pitch hunting as opponents have 31 hits in 71 at bats that end on the first pitch with five home runs and eight doubles.

Vargas has fallen on rough times of late, though he’s coming off a start with a decent line at least. After allowing six runs in each of his previous two starts, he came back with an outing of two runs allowed in five innings against the White Sox. I’m not saying these are parallel situations, but the last time he went through a rough stretch over a couple starts, he gave up two runs on nine hits in 5.2 innings against the Indians and then fired a shutout his next time out. I’m concerned about the lack of swing and miss, as he’s only gotten 24 whiffs in his last four starts, but if the changeup is there, he’ll be just fine.

Like Porcello, Rodriguez has been a bit up and down in his time with the Red Sox, but he’s on the opposite pattern, so he’s in the midst of a solid season. The lefty can rack up the strikeouts, but control is always going to be the question. If he has it, he’ll likely be tough to handle. If he doesn’t, he’ll either walk the yard, leave too many pitches out over the middle of the plate, or both. There’s a lot of talent here, but he’s still working to refine it.

Rodriguez has five pitches, but he’s essentially a two-pitch pitcher, relying on his fastball and his changeup. He will break out a slider, cutter and sinker, but more than 80 percent of the time, it’s just the two mainstays. And they’ve been really good for him while his other pitches have gotten him in trouble, so it makes perfect sense. If he insists on using that fastball, Salvador Perez has a shot to make him pay. He has just a .265 average this year against four-seam fastballs from lefties, but that’s with a .618 SLG and with that monster so close, I imagine he’ll take some shots at it. He’s also hit .370 with a .593 SLG against changeups from lefties, so he’s in very good shape against Rodriguez. Interestingly enough, Rodriguez has had a reverse split, allowing an OPS of .897 to lefties and just .709 to righties, so maybe the Royals left-handed bats can do some damage as well.

If you’re unfamiliar with what Cahill brings to the table, he throws a heavy sinker that gets him a ton of grounders (59 percent rate this year, 57 percent for his career) along with a good curve, changeup, slider and occasional four-seam fastball. He doesn’t throw especially hard, but he gets a ton of swings and misses on his slider and curve and a good number on his changeup. He missed a few weeks with a shoulder issue earlier this year, and after coming back well had one of his worst starts of the year against the Giants his last time out, going just 3.2 innings and giving up six runs (five earned) on seven hits with four walks and only one strikeout with only five swinging strikes. In his three previous starts upon returning from the disabled list, he went 16 innings with 20 strikeouts and just three walks and 35 swinging strikes. The hope, obviously, is that this last start was a blip on the radar and not a recurrence of any injury, which has been an issue for Cahill in the past. He last faced the Red Sox in 2011.

Pomeranz had an up and down first half of a season in Boston last year after being acquired mid-season, but he’s settled in nicely this year. He’s continued to strike batters out and he’s gone out there basically every fifth day and done a nice job of limiting hits and giving up relatively few home runs. He’s been especially good lately with a 2.81 ERA in his last 13 starts while keeping the ball in the park. This is a tough draw.

Pomeranz is mostly fastball and curve. He throws the fastball at 91-92 mph a little more than half the time and the curve is in the upper-70s about 36 percent of the time, so he can be a timing nightmare for opposing hitters. Both have been very effective for him, though he gets in trouble with the fastball on occasion, having allowed 10 of his 13 home runs on it in spite of the .199 BA he’s allowed. It’ll be interesting to see how Perez fares in this matchup as he has a .714 SLG on fastballs from lefties, but a .071 BA and SLG on curves against them. It’s only eight at bats, but Whit Merrifield has three hits, including a triple and a homer on curves from lefties, so he might be able to handle Pomeranz as well. Pomeranz will not get deep into the game often. He’s only pitched into the seventh in five of his 20 starts. He’s a guy you can get early, but if he settles in, you’ll have to wait a little longer to get to him. He’s allowed a .775 OPS the first time through the order and a .624 the second time. He doesn’t see the third time nearly as often, but that jumps back up to .794. It’s a good bet that if the Royals do get to him, it’ll be early.

Hammel continues to shine early before faltering in the middle innings. With relief reinforcements brought in, that might not be quite as big of an issue moving forward, but Yost will have to manage around that. The good news is that Hammel has continued to keep the Royals in games and is still sporting a 3.67 ERA in his last 10 starts, spanning 61.1 innings. If he can keep Ramirez and Pedroia off the board, he should be okay, but they both have better than a 1.100 OPS in their careers against him.

The Red Sox are a good, not great team and the Royals are probably a step below that, though they’re playing like a truly great team right now. I have a strange worry that the Royals struggle here, but given Price’s DL stint, I still think they take two of three from Boston.

Tags: Jason Hammel, Jason Vargas, Trevor Cahill |
David Lesky
Follow @dblesky
I've been a Royals fan since the day I was born, and have had the opportunity to write about the Royals for nearly a decade now. The winning was better than the losing, but the losing is kind of familiar at least.
read more from David Lesky