In any draft, it is a good idea for the 30 major league teams to try to secure talent that is available in their area. There are a couple reasons for this as they should have fans of the team that they can get discounts in signing from. Another reason, though, is that they should have much more information on these prospects than other teams, being so close to the team, their local scouts, local trainers and, at times, knowledge by local front office management. This knowledge may give the team an inside look at a prospect that other teams may lack, figuring out something that may drive that player further than what others may think.

This draft season has quite a few local prospects who could fit that bill for the Royals with a pair of college performers from Wichita State, a stout infielder from Missouri State, and a pair of talented products in the Kansas City, KS area. Prior to the draft, I hope to touch on quite of few of these players as well as some JUCO talent in the local area and some of the other possible prospects in the bordering states of Iowa and Nebraska. Today though, I will start with a pair of prospects who I see as somewhat controversial possible selections, not for their immense possible talent, but due to the fact that they have a rather large ceiling with what appears to be a rather small likelihood of achieving it.

No player fits the high ceiling/low floor scenario better than De Oca, a Kansas high product who went to Missouri to try to refine his skills. At 6’8″ and 265 lbs, Mountain De Oca seems like a better name for him and his stuff matches that frame with his ability to hit 100 mph with his fastball while regularly sitting in the upper 90s. In addition to the fastball, De Oca works a sharp curve in the low 80s that is is his best secondary pitch with tight, late break that he seems to have a bit more confidence in hitting the zone with than using his power changeup in the high 80s. The stuff is loud but extremely inconsistent with his ability to hit the strikezone with regularity, walking 6 hitters per 9 as a Junior and 7 per 9 in the Cape Cod League following his Freshman year.

Repeating his arm slot and release point appears to be a problem for Bryce, but with the bulk of his outings coming from the rotation, a change to the pen and some tweaks to the mechanics could make him a quick mover and possible late-inning bullpen piece. As a college senior with little leverage and a player that has been drafted two previous times, all 30 teams will have interest in Bryce within the first ten rounds but the Royals with plenty of early picks have an opportunity to take him earlier than others. 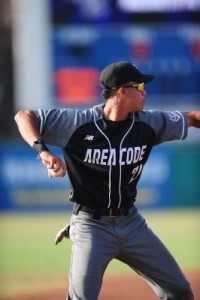 The other local wildcard in this draft comes from St. Thomas Aquinas High School, a shortstop by the name of Cam McMillan. At 6’5″ 200 lbs, McMillan looks the part of a guy that will develop into a future big leaguer. On top of that, he brings plenty of athleticism to the field, showing off an arm that reaches 92 mph from the infield, running a 6.77 time in the 60-yard dash and 4.4 down the first base line from the right side. In addition to these speeds, he’s shown off the type of exit velocity off his bat that you see from major league hitters with speeds, registering 106+ mph off the bat during batting practice at the Super 60 Showcase in addition to the 98-103 mph at other times in game action. The swing path is a tad longer and will need to be shortened in pro ball, but it’s loud with a present strength that should get even stronger later.

The arm in the field is strong, and while he has some twitch in his game, he might need to be moved to third base in the future should he add on weight or timing doesn’t improve. While the strength is there currently, some of him being ahead of his peers in that department is due to the fact that he’s older for the class, turning 19 just a month after the draft takes place. As Rany has pointed out in the past, the success rate drops off for older hitters and someone like Cam even with competition against some of the upper-level summer clubs falls into that class. Between that and a commitment to Vanderbilt that could cost some extra to buy him out of he makes for a risky prospect, but if a relationship has been formed by the local club McMillan makes for a high ceiling prospect that should be able to be had in the 4th round or later.