Helium, that’s a word one hears quite a bit of this time of year. It usually applies to the prospects that have started to show some a change in their game while drawing more eyes from scouts and front office officials to their games. It tends to flow in waves with the warm weather prospects and college guys grabbing hold of the momentum early before a few players in the northeast and midwest make a late push closer to the draft. There have been a few college guys off to good starts, but the only college bats to make a significant push towards the Top 10 are Travis Swaggerty and Nick Madrigal, both of whom have shown the type of power scouts wanted to see from a pair of less physically imposing college players.

In addition to those two, a few college pitchers have shown what some had expected coming into the season. While college players often push their way up draft boards that is slightly less surprising compared to the few prep players making the hard charge up boards. This season is no different and a couple of pitchers in the Sunshine State are starting do just that, push their way up draft boards while showing the stuff that some didn’t know they had.

Mason Denaburg – No one grabbed the headlines and intrigue more than Denaburg after his first start of the season. The velocity out of the right-handed Florida Gator commits hand has been outstanding, pumping 94-96 mph consistently while touching as high as 98. That is elite level velocity and the pitcher’s ability to keep the ball low in the zone with sinking action should enable him to miss bats and cause groundball contact now and in the future, a true plus-plus future pitch. The pitch that has come forward and created the helium for Denaburg isn’t the fastball however but the development in his power curveball, transforming from a standard offering curve into a tight, late bending slurve option. That transformation gives him a nasty late-breaking swing and miss pitch with the appearance of a future plus pitch. The change-up lags behind, as it does with most high school pitchers, but the armside fade he shows on the fastball gives the appearance that it could also have a similar fading action for the low 80’s velocity pitch. At 6-4 and 195 lbs, Denaburg has the body size of a prototypical major league starter while the arm speed he flaunts gives the impression that the velocity should remain in the future for him. The control is average currently and the command lags behind, giving some concern for an organization that has struggled to develop pitchers. 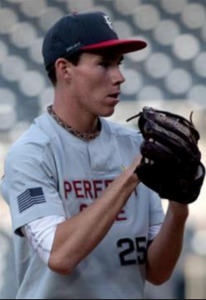 Carter Stewart – It was Denaburg drawing most of the headlines as the big right-handed Stewart couldn’t match his velocity in his first start of the year. Coming into the season though Stewart was thought to have the best breaking ball in the high school class with a curveball that registers on average well over 3000 RPM which is above-average for a major league curveball. The pitch may already be a plus-plus pitch, and further development could make the low-80’s breaker one of the best breaking pitches in all of the game. While Denaburg’s breaking pitch is what came forward for him it was Stewart’s fastball which has now been seen steadily in the 90-94 mph range with one report having it as high as 98 mph during a start this season. Prior to the season, most knew how good his curveball was but the fastball lagged as an average pitch in the high 80’s while touching in the low 90’s; now that it’s more of a mid 90’s piece with upper-level velocities then he could be working with two 70-grade pitches, which is something that you won’t find in many draft-eligible pitchers, let alone prepsters. The whippy arm speed is above-average and should maintain, if not increase, his velocity in the future while also allowing him to continue to develop a low-80’s changeup which features natural fade to combine with his armside running fastball. The long arm action may lead to difficulties in command, but the long extension from his 6-6, 200-pound frame and feel for the curveball should hide that early while he refines the command with repetition. It was Denaburg who drew most of the praise during their outing and with good reason, but Stewart should be the prize the Royals look hard at with one of their first-round picks as his ceiling could be as high as any in this draft for an organization lacking pitchers with an ingrained ability to create spin.

There are no guarantees any player can ride out a fast start until June but with multiple Royals scouts at the two pitcher’s last start then the early momentum established by the Sunshine state starters has peaked their interest.