The Royals released their minor league rosters on Monday for the full season squads. Other than some injury announcements, the rosters weren’t that surprising. The rosters have quite a few players repeating the Double-A level, although there are some interesting repeats of other levels as well. Instead of going through each roster which you can find on milb.com, I thought I’d give you the best unit for each along with some other tidbits. 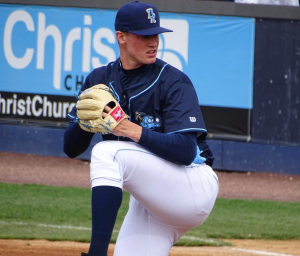 The Naturals threesome of Foster Griffin (4), Scott Blewett (19), and Glenn Sparkman (14) stands out among all the organizational rotations. The bump to Double-A is a big jump for Blewett, who many believe is one of the Royals top pitching prospects. In addition, Griffin was the Royals minor league pitcher of the year last season and Sparkman had an outstanding spring season for the major league club in Arizona. Filling out the rotation will be Emilio Ogando (46) who went 10-10 with a 3.45 ERA in 23 starts for the Naturals last season and Corey Ray who struggled last season but still features a fastball he can run into the upper 90s.

This one is an easy call when you consider it might even be better than the current major league pen. One of the Royals top prospects, Richard Lovelady (9), will help front this pen that will also feature fireballing Josh Staumont (17), who finally makes the move that should help accelerate any chance he may have in making it to Kansas City. Coming back to Omaha will be Kevin Lenik (28), Kevin McCarthy, Eric Stout (21) and Seth Maness. Rounding out the bullpen is Mike Broadway, who is coming off an impressive spring with the major league club, and Wily Peralta after clearing waivers.

The Rocks infield is talented at both corners with top third base prospect Emmanuel Rivera (10) at third and big power threat Chris DeVito (45) across the diamond at first. In the middle of the infield is Gabriel Cancel (16) and the 46 extra base hits he collected for Lexington last season in 103 games. Alongside him is shortstop Angelo Castellano. The Venezuelan shortstop stabilized the position for Lexington last year after Ricky Aracena’s early struggles. He’s mostly a defensive shortstop, but will show some pop from time to time. The Rocks infield will also include DJ Burt, a speedy option with good on-base skills.

It’s a two-team race with Wilmington’s combo of Chase Vallot (13) and Meibrys Viloria (18), versus Lexington’s MJ Melendez (2) and Sebastian Rivero (25) tandem, but I’ve got to give the edge to Lexington and Melendez. For everything I’m hearing about Melendez, he is advanced defensively, brings some good potential power and has the advanced skill to know to cut down on his swing with two strikes to reach base. The ball explodes off his bat as evidenced by some of the best exit velocities among the draft class last year, and he is beyond his years in controlling the run game. Next to Melendez will be another young and advanced defensive catcher in Rivero who is still just 19 years of age and receives similar raves and reviews that fellow countryman Salvador Perez did at the same age.

This is close and definitely the one I had to think about the most. The Lexington outfield featuring defensive dynamo Michael Gigliotti (6) running next to powerful Seuly Matias (8) in right should be a fun watch. They should get a nice contribution from Vance Vizcaino and the hitting skill he showed with a .325 batting average over his final 54 games last season. The top Royals prospect plays in Wilmington, as Khalil Lee (1) will be attempting to power up at Frawley Stadium and attempting show that he’s a Top 100 prospect. Running alongside Lee will be speedster Rudy Martin (40) who showed his ridiculous speed after stealing 26 bases in just 37 Lexington games. That’s not all that he brings to the table as the 5-7 outfielder also has a little thump in his game despite his size. While that tandem could be special, I think the best overall outfield at least to start the season will be in Arkansas with the Naturals foursome that all have tools in the shed. The top outfielder, Donnie Dewees (15), earned Texas League Player of the Month during June to carry the club to a first half playoff berth. Next to him will be Elier Hernandez (24) after his possible breakout season was cut short last year (19 XBH in 46 games) by injury, and Anderson Miller (38) who has adapted in his second go-around at every level. It’s the depth of the group that gives them the lead, as their bench outfielders Brandon Downes (53) has plenty of tools with a strong arm and some power to do some damage in the Texas League this season; Alfredo Escalera has shown good bat to ball skills in the past.

In looking at the complete rosters I would expect the two upper-level squads to have the best team records due to their stronger pitching staffs. A return to the playoffs could be in the cards for the Storm Chasers should Hunter Dozier, Ryan O’Hearn and Frank Schwindel hit enough to carry the offense. The Naturals have 20 players that have played at Double-A prior, which should help them make another appearance in the playoffs. The lower levels will be led by offenses and some pitching staffs. Wilmington last made the playoffs in 2015 as part of the Royals organization, while Lexington has never made the playoffs as an affiliate of the club.