The I-70 Series resumes this week as the Royals head across the state to take on the St. Louis Cardinals for three. The Cardinals are involved in a current four-team race in the NL Central, and at least three of those teams appear to have staying power. They are not a perfect team, but they are pretty good. Offensively, they have a few key pieces that have carried him, along with a few others who should be much better than they are, which gives hope for this team to get even better than they are. Even with Carlos Martinez on the disabled list and Adam Wainwright being a shell of what he once was (and being on the DL), the rotation is good and the bullpen has some solid contributors. Unfortunately for them, one of those has not yet been Greg Holland, who has a 7.30 ERA and has walked 14 while striking out nine. 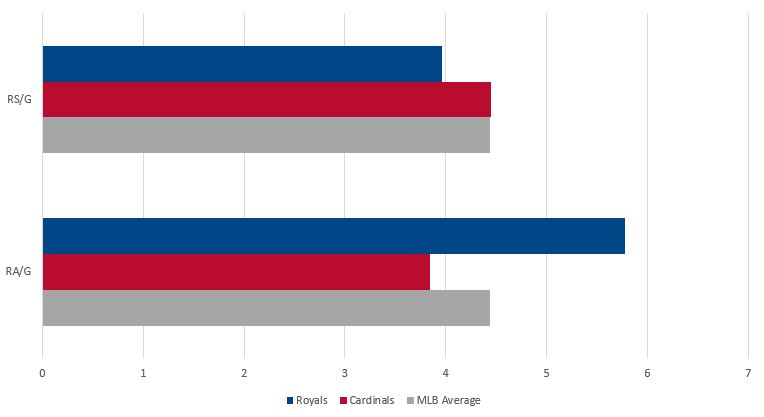 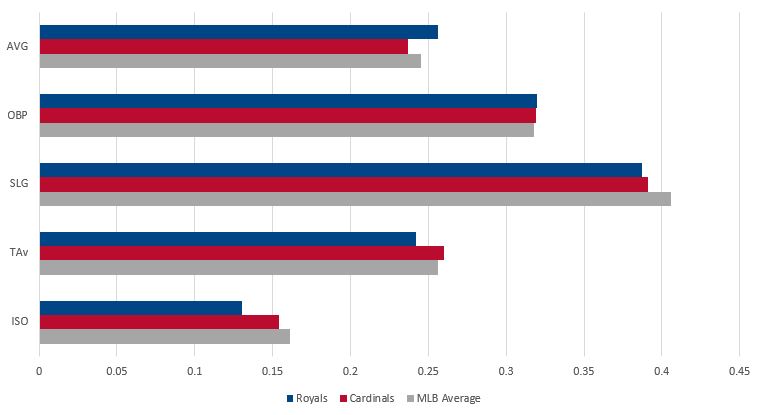 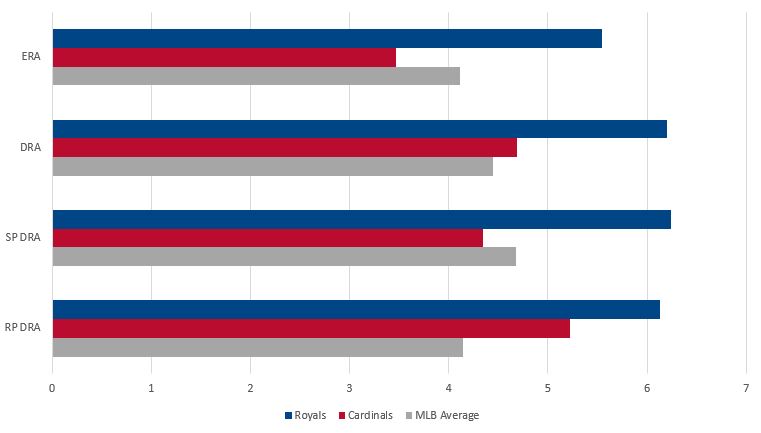 Mikolas has been a nice surprise for the Cardinals with just how good he’s been even though they had high hopes for him when they signed him after time in Japan. He’s doing it by having some absolutely fantastic control, walking just 2.4 percent of the batters he’s faced. He doesn’t strike out many hitters, so that’s something to pay attention to with him, but he has allowed an average exit velocity of just 86.4 MPH. He has stranded 83.7 percent of runners, which is well above average, so there should be some regression to the mean there to bring the ERA up a bit. It’s interesting that he throws so many first pitch strikes because he will start at bats with any of his four main pitches, which means he can control everything. And for some reason, opponents are taking the first pitch about two-thirds of the time. A little ambush might be the ticket to getting to Mikolas. Well, that and waiting until a third time through the order when he has allowed a .749 OPS.

Kennedy has seen his season really spiral over his last two starts. He had a 2.92 ERA after his May 4th start, and since has given up 14 runs in 10 innings with four home runs allowed. This is likely a good chunk of regression to the mean, but I don’t think it means Kennedy can’t be useful moving forward. I said this before his last start, but it might be a good idea if he starts to lean on his changeup more. Opponents are hitting just .083 against it with a .111 SLG. That’s a heck of a lot better than pretty much any other pitch he throws. Maybe he does well with it because he uses it scarcely, but given how hard he’s been hit in his last couple starts, it’s worth finding out. He’s faced the Cardinals nine times in his career and is 3-6 with a 7.41 ERA, so there’s that. It’s obviously a tiny sample, but Tommy Pham is 4 for 8 with a home run and two doubles against him, so maybe he should just pitch around Pham.

Weaver was the Cardinals first round pick in 2014 and has pitched in at least parts of the last three seasons. Last year, he showed flashes of a top of the rotation starter. This year, he’s regressed in some ways with fewer strikeouts and more walks, but his home run rate has come down by quite a bit. I’m not sure how much of that is skill and how much of that is luck, but it looks a lot more like his minor league numbers than what he showed last season in that regard. He relies on a four seam fastball that averages around 94 MPH, a changeup and a curve. While he hasn’t allowed many to hit for power, lefties have done much better against him than righties with a .305/.380/.375 line with just 15 strikeouts in 93 plate appearances, so the Royals lefties might have to shoulder the load in this one. He has been a bit of the opposite of Mikolas in that he’s struggled with runners in scoring position, which has led to a below average strand rate. It’s an issue he had in the big leagues in 2016 as well, but he’s too talented to keep that up. Like Mikolas, though, he has issues the third time through, but they’re even worse with a .306/.419/.500 line allowed. He doesn’t get there often. In fact, he’s only even pitched into the sixth inning four times in his nine starts.

For a few starts, it looked like some of the adjustments Hammel made were working and he would have some trade value at the deadline. Those days are over. He has a 10.71 ERA in his last four starts with just 10 strikeouts. He just isn’t missing any bats really and his stuff isn’t good enough to elicit weak contact. I guess if there’s something you can say about him it’s that he’s giving some innings sometimes to save a bullpen, which I guess isn’t nothing. He’s 4-6 with a 5.51 ERA in 13 career starts against St. Louis. He pitched decently against them last season and he has held Matt Carpenter in check with just a .138/.167/.276 line against Hammel in 30 plate appearances. The best hope for Hammel and really all Royals starters this week is that the Cardinals have hit just .238/.310/.388 against right-handed starters through Saturday’s action.

Through 2015, it looked like Wacha was on his way to becoming one of the better starters in the National League for the foreseeable future. Then in the last two years, he’s struggled a bit and his future was a bit more uncertain. This year, the results have been good again. He’s walking too many hitters, but he’s done a nice job as usual keeping home runs in check and he looks like a solid middle rotation arm at the least again, which is good news for the Cardinals. His batted ball data is interesting this year. He’s getting way fewer ground balls, but also fewer fly balls. The line drive percentage is up, but his exit velocity allowed is fine at an average of 87.7 MPH. He has a reverse platoon split this year and it’s significant. He’s allowed a .279/.370/.442 line to righties compared with .202/.266/.222 line to lefties in a pretty similar number of plate appearances. That bodes well for Whit Merrifield, Jorge Soler and Salvador Perez in this game. Sure enough, Soler is 5 for 8 with two homers against him in his career, so maybe he can have a big game to help the Royals win.

Junis was solid against the Yankees, if not hurt a bit by the home plate umpire’s odd strike zone. The home runs allowed are a big reason why his DRA and FIP are both elevated, but he’s only allowed more than one in two starts. The issue is that he’s allowed eight in those two starts. A key for him has been getting swings on pitches outside the strike zone, usually with his slider. If he can do that, he’s going to be tough for any team to hit, but some of the Cardinals mashers like Martinez, Pham, Gyorko and Carpenter have all had big struggles with the slider. Junis hasn’t yet faced the Cardinals in his career, but I think this could be a good start for him as long as that slider is working.

Just like every series, I can’t envision a world where the Royals win it, so I’m guessing they lose two of three, but if the starting pitching continues down the track it’s gone, I could see this being a really ugly sweep.

Tags: Ian Kennedy, Jakob Junis, Jason Hammel, Luke Weaver, Michael Wacha, Miles Mikolas |
David Lesky
Follow @dblesky
I've been a Royals fan since the day I was born, and have had the opportunity to write about the Royals for nearly a decade now. The winning was better than the losing, but the losing is kind of familiar at least.
read more from David Lesky