The Royals are red-hot (for them) and welcome in the Oakland Athletics for a three-game weekend set. The A’s are on the upswing, but not quite there yet, though they do have a talented roster with an offense that should honestly be better than it has been, a rotation featuring some promising young arms and Trevor Cahill and a bullpen with a very good closer and some solid supporting cast members. The A’s corner infield of Matt Olson and Matt Chapman looked like future stars last year, but they’ve taken a slight step back this year. Jed Lowrie has been great and Khris Davis looks to be back just in time to terrorize the Royals. The Royals will miss the A’s two young starters who are pitching well in Sean Manaea and Daniel Mengden, so that’s a plus. 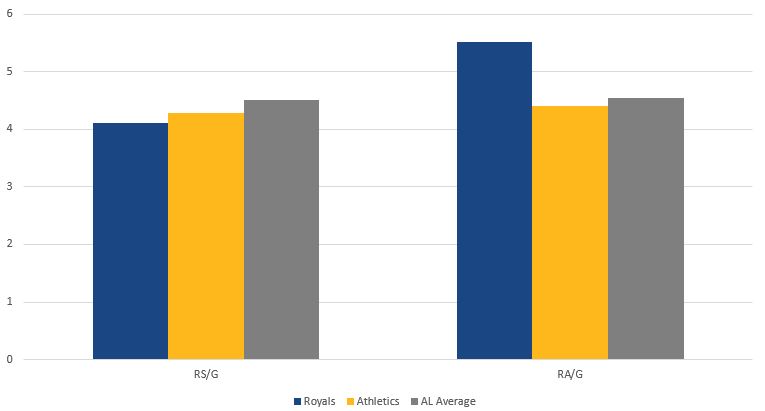 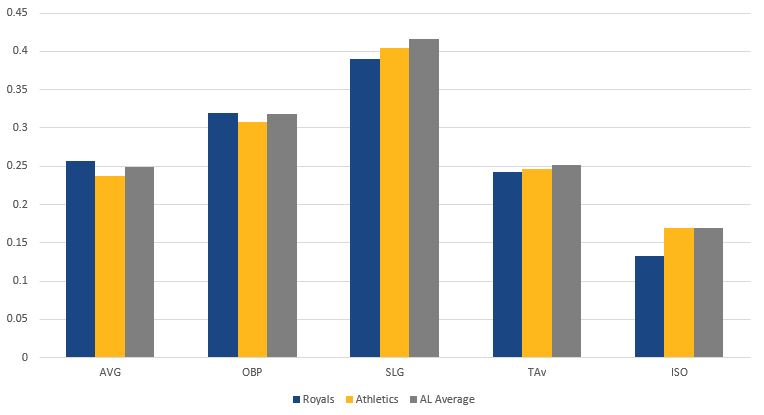 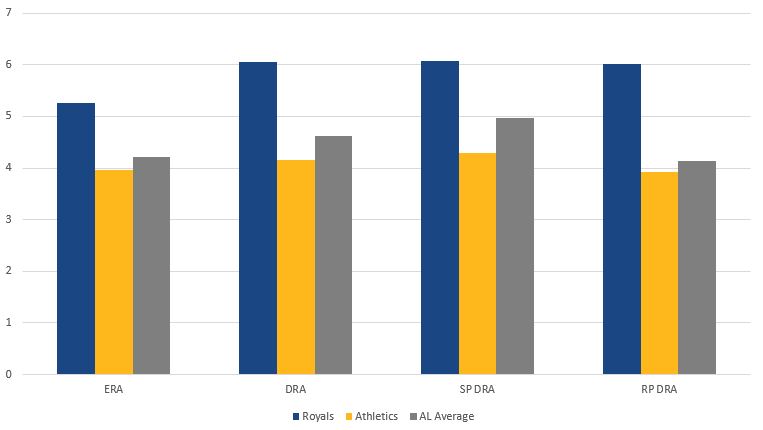 Montas is 25 years old and very talented. He’s also in his fourth organization after being traded from the Red Sox to the White Sox to the Dodgers to the A’s. It doesn’t mean anything bad for him, but it is interesting that he’s been on the move so much in his young career. He’s seeing action for the third season of his career, with this as the first time he seems poised to get regular starts after a less than inspiring run in the bullpen in 2017. In his first start, he shut down Arizona over six innings, so he’s coming off a good one. He throws a very hard sinker and four-seam fastball, averaging better than 97 MPH with each. His swing-and miss-pitch that he relies on is his slider. It’s been the pitch responsible for the vast majority of his strikeouts in his career and four of his seven in his season debut. He has struggled mightily against lefties with a .300/.433/.600 line allowed and a 17 percent walk rate. He dominated the lefties he faced against Arizona, so maybe he’s worked on some things to correct that, but I imagine Mike Moustakas is licking his chops hoping he hasn’t. He has faced the Royals once. If you remember Adalberto (then Raul) Mondesi’s monster home runs in garbage time against the A’s, it was off Montas.

After three starts with a 10.91 ERA, Kennedy settled down a bit in his last start to give up just two over five against Texas in a game that was ultimately an extra inning loss for the Royals. He continued a troubling trend of getting very few swings and misses and his control was kind of all over the place. He’s seen his ERA jump from 2.92 to 5.15 in just four starts, which is partially a product of small sample leading to big variation, but also due to him pitching so poorly. He really hasn’t faced the A’s much in his career, but he had a nice start against them last season. If we’re looking for rays of hope, that would probably be it with Kennedy given the way he’s pitched lately.

The acquisition of Cahill somehow stings even more now that he’s still in the American League and pitching quite well for Oakland. He couldn’t throw strikes with the Royals, couldn’t get strikeouts and couldn’t stop giving up home runs. With the A’s, he’s struck out almost as many batters as innings pitched, his walks are down to a career low and he has allowed just four home runs in 44 innings. He has thrown five wild pitches, so if and when the Royals get runners on against him (he has a 0.89 WHIP too), they should be ready to move on pitches in the dirt. One thing that I don’t think has legs to continue just based on intuition is the fact that he’s been really good even when turning the lineup over a third time. He’s allowed a .162/.225/.351 line the third time through, and even though he does have good stuff when he’s on, that just seems unsustainable to me. No Royals have much experience against him, but Jon Jay is 1 for 10 with 2 HBPs, so that’s not great. Maybe they’ll be angry at him for last year and take it out on him.

Hammel has really been good in his last two starts, getting swings and misses, limiting walks and allowing just one run over 12.1 innings in his last two starts. Last time out, he picked up 10 strikeouts in 5.1 innings and while the Rangers aren’t great at making contact, that’s still impressive. Hammel uses his slider a lot and it has a 33 percent whiff rate this year, which is pretty much in line with past seasons. Olson and Jonathan Lucroy have hit sliders quite well and Davis has slugged well against them, but that’s a pitch that will need to be on if he wants to take down the rest of the Athletics lineup. As great as Lowrie has been this year, he’s hitting just .133 with a .200 SLG against sliders, so that’ll be important. He’s 4-2 with a 4.67 ERA in his career against Oakland, but struggled last year, giving up eight runs on 15 hits in 10.2 innings.

Gossett’s big league career now spans 22 starts and he doesn’t seem to really be getting any better. Wins and losses are pretty irrelevant, but 4-14 is striking, as is a 6.10 career ERA. This season is at least interesting for him so far, though, as his fastball velocity is pretty significantly up from last year, as in by more than two miles per hour. He’s moved away from his sinker and more to the four-seamer this season. It’s still been hit hard, but that’s a development worth watching for the Athletics because maybe it pays dividends in the long run as this sample is still quite small for this year. He has no discernable platoon split in his career, with an .898 OPS allowed against righties and .904 vs. lefties. He’s only thrown first pitch strikes about 45 percent of the time this season, and when he’s behind in the count, opponents hit .386/.520/.636. The moral of this story is go ahead and take the first pitch unless it’s middle-middle. Gossett hasn’t faced the Royals or anyone on their active roster, so the small sample by which we judge success will begin in this one.

Junis is really rolling along after another solid month where he made six starts and averaged more than a strikeout per inning. That’s one area where his game has progressed with the season as he has gotten more strikeouts than in the early going. He had some control issues on Monday against the Twins, walking four, which was actually the first time he’s walked more than two batters in a game. He even hit another batter, so even though he only allowed six hits and struck out seven over six, he was in trouble quite a bit. The A’s, as usual, will work the count, seeing better than four pitches per plate appearance this season, so he needs to be on his game or else he could be looking at another relatively short start after just one start of more than six innings in May. Junis did pitch well against Oakland, making his big league debut against them in relief and going six strong against them in August, though he struck out just two batters in that game.

The Royals are playing well, but I just don’t have a great feeling about this series. I think Oakland’s power bats will come alive as they always seem to do in Kansas City and Royals starters will struggle enough to help them toward losing two of three before the Royals head west next week.

Tags: Daniel Gossett, Frankie Montas, Ian Kennedy, Jakob Junis, Jason Hammel, Trevor Cahill |
David Lesky
Follow @dblesky
I've been a Royals fan since the day I was born, and have had the opportunity to write about the Royals for nearly a decade now. The winning was better than the losing, but the losing is kind of familiar at least.
read more from David Lesky