The Royals get to welcome in a team in their current class in the Cincinnati Reds as they play a quick two-game set as the first part of a home and home series against the National League Club. The Reds are actually a sort of interesting team because they have multiple star-level offensive players. The craziest thing is that Joey Votto isn’t even having the best season of their three elite hitters. Eugenio Suarez and Scooter Gennett have both been better by TAv and wRC+. That doesn’t mean Votto isn’t dangerous. He’s still incredibly dangerous. Gennett and Suarez have just been better. The issue with that kind of talent is that they’ve gotten so far below average production from way too many spots in the lineup along with a starting rotation that has somehow been even worse than the Royals. If you want a strength in the pitching staff, their bullpen has been very good in the late innings, led by Raisel Iglesias. 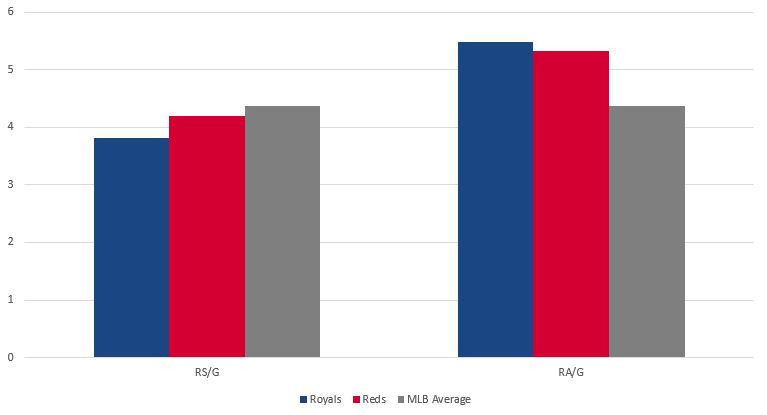 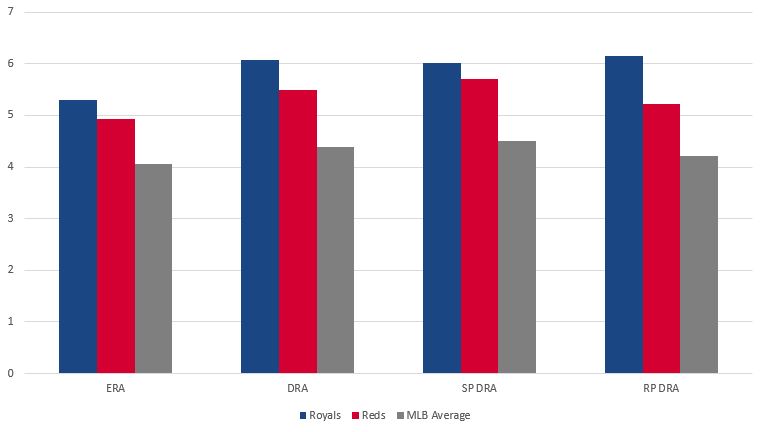 Romano showed some promise in his rookie season to the point that you could maybe see with a tweak here or there that he could be a back of the rotation starter. He’s taken a step back this year. One of the redeeming qualities he had was that he kept the ball in the yard, which carried over from his time in AA and AAA the previous two seasons. This year, he’s allowing a lot of home runs and that’s come with his strikeout rate falling and his walk rate rising. He throws pretty hard, averaging 94-95 MPH with his fastball that he throws more than half the time. He supplements with a slider that has actually been incredibly effective. It’s accounted for the majority of his strikeouts, but it really comes back to the fastball. He’s allowed a .302 average and .554 SLG on it. His pitch mix doesn’t bode well for Jorge Soler from a volume standpoint, but on any given at bat, I could see him launching one if he gets the fastball in the right spot. Romano has been crushed by lefties (.333/.404/.543), which means there’s a good bet we see Ryan Goins in this one, if you’re looking for reasons to be disappointed. One thing to note: don’t be surprised if the Royals are swinging on the first pitch. He’s allowed a .438 average and .844 SLG on the first pitch, so it’s a good time to strike.

Kennedy against a lineup that has some guys who can mash is pretty scary. The one saving grace with Kennedy coming into the season was the hope and idea that he could at least eat some innings for the Royals, even if he was struggling. Even in one of his better starts of the last month and a half, he was only able to go five against the Angels and hasn’t pitched more than six innings at all this season. He gave up just one run over five innings in his last start, but he still has a 9.42 ERA over his last six and has pitched fewer than five innings per start in that time with 43 hits allowed in 28.2 innings. He has gotten strikeouts still at least, so there’s some hope maybe, but he just isn’t getting the whiffs he needs to be successful. He might be able to work around guys like Hamilton and Peraza in this lineup, but he’ll get punished by the Reds big bats if he continues on like he has. I still say he needs to use his changeup more, but he just doesn’t listen to me.

Mahle was ranked in the bottom part of both the MLB and Baseball America top 100 prospects heading into the season and has had a nice enough start to the year. While his ERA was shinier in his debut last season, he’s improved his strikeout rate and his walk rate from the small 20 inning sample last year, but has been relatively easy to hit and has allowed some home runs, which is to be expected in his home ballpark. He’s very fastball heavy, throwing it more than two-thirds of the time. He uses a slider and a changeup as well, but both have been hit quite hard this season, which might be why he leans on the fastball so much. Like Romano, lefties have been dynamite against him, hitting .286/.392/.564, but unlike Romano, he’s actually limited righties well to a hellish .666 OPS. He’s probably due for some regression, which is part of why his DRA is a fair amount above his ERA because he’s allowed a .296/.367/.526 line with the bases empty but a .186/.246/.254 line with runners in scoring position. Something has to give there. The times to get to Mahle are early (.779 OPS first time through) or a little later (1.288 OPS the third time through). I think the future is bright for him, but if the Royals are going to score some runs, they have a real shot in this series against him and Romano.

Hammel had a vintage 2017 start his last time out against Oakland, looking good for five innings before succumbing to the lineup when facing them a third time and allowing three runs in the sixth inning to sully his overall line. It doesn’t change the fact that things have been going much better for him lately since his ERA ballooned to a season-high 6.28 after his start against the Rays in mid-May. In the last four starts, he’s gone 24.1 innings, struck out 25, walked five and has posted a 2.59 ERA. He’s still allowed too many hits, but getting the strikeouts up and the walks down has helped significantly. And it’s worth mentioning that it wasn’t just the third time through the order in his last start, it was the third time through the order after facing them for six innings less than a week before. That doesn’t excuse what happened, but I’m still encouraged by Hammel lately. Like Kennedy, I worry about the Reds big bats against him, though, because even though he’s been much better, if his slider isn’t on, he could be in big time trouble.

Tags: Eugenio Suarez, Ian Kennedy, Jason Hammel, Joey Votto, Sal Romano, Scooter Gennett, Tyler Mahle |
David Lesky
Follow @dblesky
I've been a Royals fan since the day I was born, and have had the opportunity to write about the Royals for nearly a decade now. The winning was better than the losing, but the losing is kind of familiar at least.
read more from David Lesky