The Royals will try to put an end to their losing as they welcome in the Texas Rangers to Kansas City this week. The Rangers are kind of what I expected the Royals to be in that they’re bad, but they’re not world class bad. The Rangers, as a team, walk a lot, strike out a lot, hit a few home runs and score runs at about an average rate. An issue familiar to Royals fans is that they just struggle a lot on the mound. They have Cole Hamels in the rotation for now, and not much else really. In the bullpen, they do have some nice pieces, but in general, there just isn’t a ton of top-end talent there to make things happen. 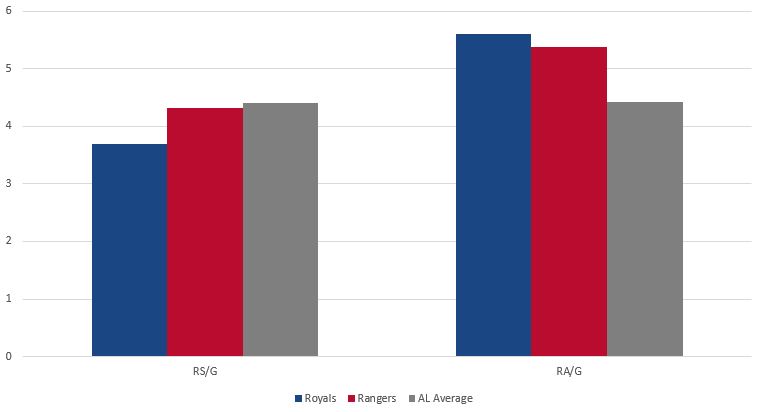 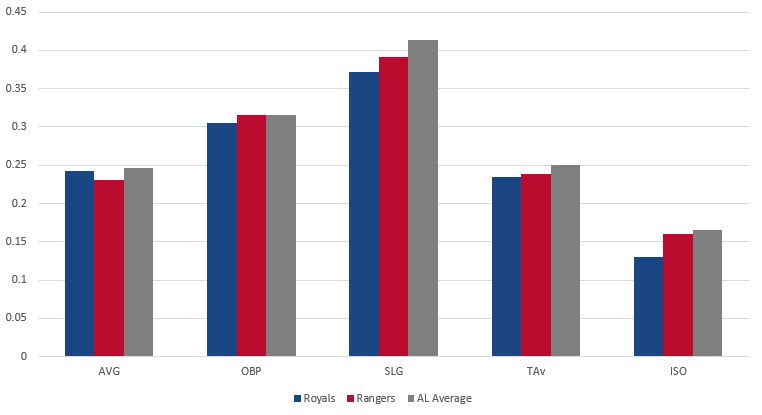 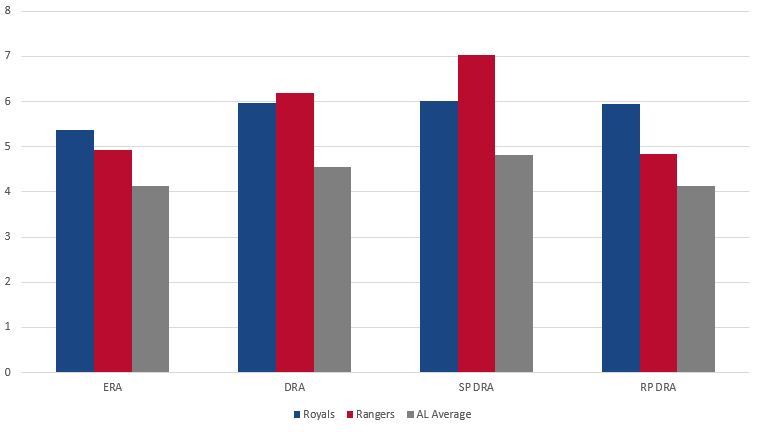 Following the 2016 season, it looked like Colon might never slow down. Then he was terrible in 2017 and struggled to find work this season before the Rangers gave him a shot. And for awhile, it looked like he was back on track. In his last five starts, he’s been a complete disaster, going 1-3 with a 9.51 ERA and allowing 10 home runs in 23.2 innings. He lives with his two-seam fastball, throwing it nearly two-thirds of the time, and it’s not what it once was, averaging about 87-88 MPH. He does throw his four-seamer a bit now and it comes in a little faster, averaging a touch over 90, but he really lives with the two-seam fastball. A big issue is that his changeup has been massacred this season with opponents hitting .406 on it with a slugging percentage of .844. At this point in his career, I think it’s fair to wonder if he wouldn’t benefit from a shift to the bullpen. The first time through, he’s allowed a .200/.222/.448 line, so still too many extra base hits, but he’s been generally pretty good. The second time through, that jumps to .304/.343/.559. Then the third time through, it’s even more excessive with a .299/.324/.642 line allowed. No Royals have faced Colon a ton even though he’s been around forever, but Alex Gordon and Mike Moustakas both have been really good against him in limited exposure.

Kennedy has been rocked twice this season, giving up nine runs to Baltimore in May and eight runs to Oakland a couple starts back. Since that most recent debacle, he’s been pretty good and even went eight shutout innings in his last outing against the Reds. The concern I continue to have, though, is that he just isn’t generating hardly any whiffs. When he’s on, he’s getting a lot of swings and misses from both his changeup and his high fastball. And the changeup has been a fantastic pitch for him this year, but his last start, which was easily his best of the season (the only time he’s gone beyond six innings), he didn’t use many at all, so that’s at least somewhat interesting. Like Colon with the Royals, no Rangers have faced Kennedy a ton, but not too many have actually hit him well, so that’s something.

Hamels is the Rangers best starter and the numbers look generally good, but DRA just doesn’t see what he’s done as sustainable at all. His FIP isn’t quite as dreary, but it’s still not good at 5.34. A lot of the issue is that he’s walking a few too many hitters and has given up quite a few home runs this season. He’s currently allowing the highest average exit velocity of his career as well as the highest barrel and hard hit rate, which could be why DRA isn’t a huge fan of his this season. His four seam fastball has been a problem this season with opponents hitting .357 against it with a slugging percentage of .857. He just isn’t getting anyone to swing and miss it with a whiff rate of just 6.2 percent. That’s insanely low. He faced the Royals when they were in Arlington last month and took the loss when he went 6.1 innings and gave up five runs on eight hits with two home runs allowed and three walks. Drew Butera and Salvador Perez both homered, but I think it’s not especially likely they both play in this game.

Hammel’s ERA rose to 6.28 after his start in mid-May, but has really turned his season around over his last five starts, going 2-2 with a 2.56 ERA over 31.2 innings. He’s gotten a few more swings and misses and has only walked five batters in those five starts with only two home runs allowed. He has allowed a few too many hits, but I think a lot of that is being around the strike zone maybe a bit more than you’d really like. In that stretch, he went 5.1 against these very Rangers and struck out 10 while walking just two. If you listened to the game on the radio, you would have heard Denny praising Hammel while also putting the Rangers down, so maybe it’s not entirely him, but he has been much better lately and has given the Royals a good shot to win when he takes the mound.

Mendez is still just 23, but has seen a lot of his prospect shine wear off after seeing big league time over the last three seasons and struggling in each of them. He did finally get his first career start against the Rockies on Friday and was pretty bad, giving up six runs over three innings with just one strikeout. He was the number 56 prospect in baseball according to MLB.com prior to last season, but was just okay in Double-A last year and has been downright bad in Triple-A this year with not many strikeouts and way too many walks. Unfortunately, this is exactly the pitcher the Royals struggle against. Of course, the Royals struggle against pretty much every pitcher these days. In his big league career, Mendez has been okay against lefties and a disaster against righties. That’s pretty much the case with his minor league season this year as well, so if the Royals are going to find success, I feel like Hunter Dozier, Salvador Perez and maybe Whit Merrifield, if he plays, will have to carry the load.

Junis is coming off two starts in a row where he allowed six runs over 5.1 innings and three home runs. He’s seen his ERA jump nearly a full run, but his last start against Houston was particularly troubling because he just couldn’t get any swings and misses. Now, the Rangers are a good team to get back on track against if his slider is working because they swing and miss plenty. The home run is a pretty good barometer for if Junis is on. He’s allowed 14 of his 18 home runs in four of his 14 starts. He has a 2.80 ERA in the 10 starts that he hasn’t allowed multiple home runs. I know that’s a weird way to put it, but it’s the trend. This’ll be his first career start against the Rangers, but I do believe their contact issues could make this a good matchup for Junis.

Is it wise to predict a Royals victory? Probably not, but I’m so crazy that I’m going to do it and say the Royals win one of three in this series and get back on pace for more than 50 wins.

Tags: Bartolo Colon, Cole Hamels, Ian Kennedy, Jakob Junis, Jason Hammel, Yohander Mendez |
David Lesky
Follow @dblesky
I've been a Royals fan since the day I was born, and have had the opportunity to write about the Royals for nearly a decade now. The winning was better than the losing, but the losing is kind of familiar at least.
read more from David Lesky