The Royals head west for the final time in 2018, this time to take on the Seattle Mariners in a three-game set at Safeco Field. The Mariners were hopeful to contend this season, but I think being on pace for 100 wins at the halfway point was beyond even what they were expecting this year. It seems like everything the Mariners have been trying to do for years finally came together this season with a very balanced offense, a starting staff pitching well even if the names carrying it are unexpected and a bullpen that maybe hasn’t been as good as the sum of its parts but has a chance to be elite in any given game or series. This is a good team, and that doesn’t surprise me but just how good they’ve been does. It’s probably worth noting that they’ve way outperformed their peripherals, but wins in the bank are wins in the bank. I guess we should also point out that the Mariners are 30-12 against teams with a sub-.500 record and just 21-19 against teams above .500. But again, wins are wins. 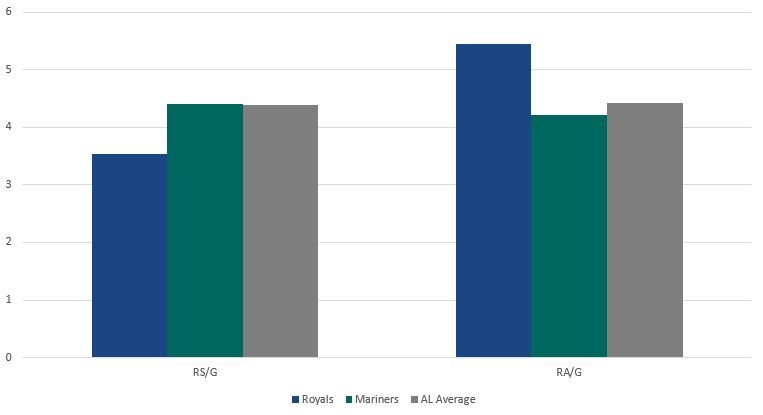 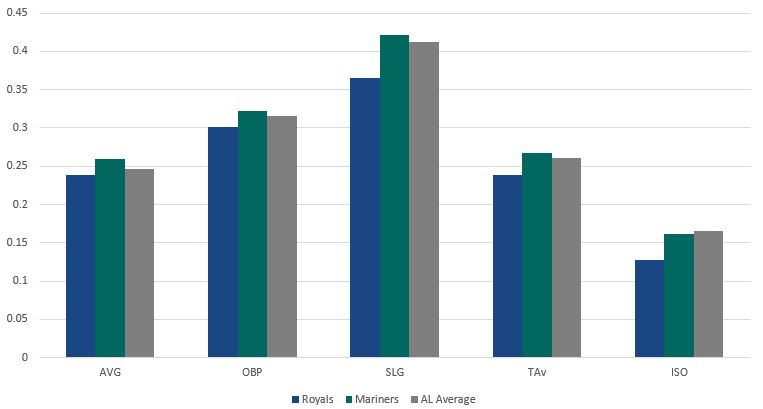 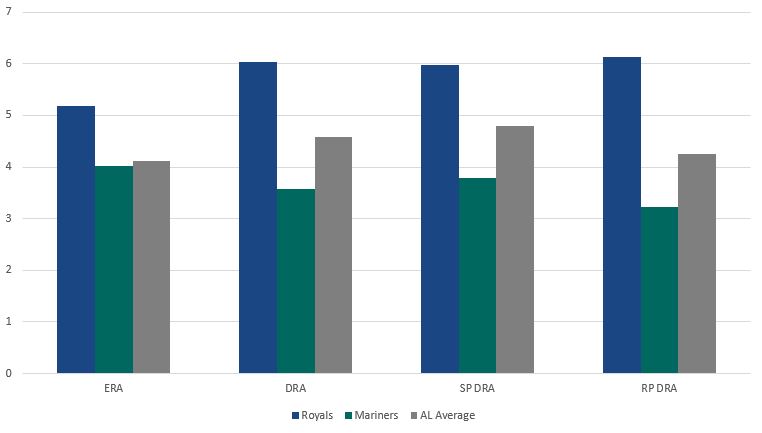 The Mariners are very thankful for the contributions of Gonzales this season as he’s given them some basically league average innings when they’ve really needed it, and it’s easy to think he’s actually underperforming a bit with his excellent strikeout to walk ratio and decent home run numbers. It’s really been an up and down year for him as he was hit very hard early in the year and then had a nice stretch where he posted a 2.04 ERA over nine starts. He’s struggled again in his last three, though, so who really knows with him? He’s a pretty typical “crafty” lefty with a 91 MPH fastball, a changeup, a curve and a cutter. When he’s good, his changeup is good. When he’s not, it’s a pitch that gets hit hard. That and the cutter are the pitches he uses to neutralize righties and righties have hit both well at times. It’s fair to wonder if he might be better in the bullpen. The first time through the order, he’s allowed a .239/.285/.313, but that jumps to .318/.369/.496 the second time and .270/.298/.483 the third time. He faced the Royals earlier this season, in the game the Royals won 10-0 and he was rocked pretty hard and didn’t make it out of the third.

Kennedy pitched very well in Houston last weekend, allowing just two runs on four hits in seven innings. Walks had been an issue for him recently and he only allowed one. He also only allowed the one home run, so all in all, that has to be considered a successful outing for him, but he’s continued his troubling trend of getting barely any whiffs with just seven swings and misses. It’s the fifth time in his last six starts that he hasn’t gotten double digit swings and misses, which is a problem for a guy who used to rely on getting ugly swings on fastballs that looked awfully hittable. Now they are just awfully hittable. Still, a solid start is a solid start, but this Mariners lineup might actually be a bigger test for Kennedy than Houston’s, as weird as that might sound. On the flip side, he’s really held down Mariners hitters in his career, especially Dee Gordon and Jean Segura, who have a .544 and .516 OPS against him respectively.

I think it’s fair to say that if Hernandez is going to adjust to his declining repertoire, he hasn’t done it yet. The velocity has been declining for awhile, now averaging just 90 MPH, but this is the first year he’s been hit really hard, with an average exit velocity allowed of 89 MPH and a 39 percent hard hit rate. His sinker has been a big problem for him as has his slider that was once a really big weapon for him. His changeup was always his bread and butter and that’s still really good, but he just doesn’t have the other pitches to make it stand up anymore. He wouldn’t be the first pitcher to not be able to adjust to being a different type of pitcher, but many examples show it’s possible. Having said all that, Hernandez has actually been pretty good at home this year, allowing just 41 hits in 49.1 innings and striking out 44, so maybe the home cooking helps him with his diminishing velocity. The most surprising aspect of his struggles are probably the fact that he’s allowed a .285/.342/.518 line the first time through the order, so get him early and get him often. He struggles the third time through as well, but it would be nice to hit him in the first couple innings and not have to wait. Whit Merrifield has homered against Hernandez and Mike Moustakas has hit two while slugging .684 against him in 19 plate appearances.

I don’t mean to be an apologist here, but I don’t think Hammel is entirely to blame for his start against the Astros last weekend. He wasn’t good, don’t get me wrong, but he was the victim of some horrible umpiring. Even so, he struggled with control for the second straight game. He had walked five batters in his five starts between May 22 and June 13. He’s walked nine in his last two starts and allowed 15 hits in 9.2 innings. The Mariners don’t walk a lot, so maybe he can get back on track. Fun fact, Hammel was actually drafted by the Mariners in 2000 in the 23rd round but didn’t sign, so maybe we have a revenge game or something. He’s 3-3 with a 3.53 ERA in his career against the Mariners in eight games and pitched decently against them last year with three runs allowed in 6.1 innings in a loss. Like Kennedy, he’s also had a lot of success against the Mariners bats, holding most of the big ones down surprisingly well.

While somehow Wade LeBlanc has the shinier ERA, Paxton is the clear ace of the Mariners and it looks like he might be finally putting the success together with health. He’s just about five starts away from a career high in innings pitched and probably a career high in strikeouts as well. And yeah, he gets plenty of those and he doesn’t walk many. He also doesn’t give up a ton of hits. He’s a legitimate top-of-the-rotation starter when he’s healthy. He’s heavy on his four-seam fastball, throwing it about 56 percent of the time and averaging 96 MPH with it. He has a curve and a cutter that are both fantastic pitches as well. If you’re going to get a home run, it’ll likely be on a fastball that doesn’t move as he hoped, but that’s a fantastic pitch as well. He’s not perfect, though, and oddly has allowed a .338/.402/.541 line to lefties. He’s always had a reverse split, but this year is excessive. He’s also been barreled quite a bit more this season than in the past with an 8.7 percent rate, the highest of his career. Maybe that’s good news for guys like Moustakas and Lucas Duda. He did face the Royals earlier this year and allowed two runs on six hits in six innings. He struck out 10 and walked just one, so the Royals have seen him and struggled with him. Moose does have the only home run against him among Royals hitters.

Keller is the main attraction in the Royals rotation right now with Jakob Junis struggling. He’s coming off the best outing of his young career, throwing seven shutout innings against the Angels. He struck out six batters, got 15 ground balls out of 16 batted balls and got 12 swings and misses in his 109 total pitches. I’m curious to see how he’s handled after his high pitch count, but he didn’t really have especially stressful innings and he’s a big boy who can handle a workload. Something to watch for is his slider usage. He threw 43 of them against the Angels, which is actually 23 percent of the sliders he’s thrown this season in 15 percent of his innings and pitches thrown. And it was really good too. He had eight swings and misses on it and no hits allowed. The Mariners did get a look at him in April when he threw 1.2 innings of scoreless relief, but that was his fourth career appearance, so it’s probably safe to say he’s a bit different these days.

I don’t know why but I feel like getting Jorge Bonifacio back will be a big lift for this team and give them a little spring in their step. Combine that with Moose’s .385/.385/1.077 line in Safeco last year and I’m going to go out on a crazy limb and predict the Royals actually win this series. Do I really believe they will? Eh, maybe not, but hey, it’s fun to be outlandish.

Tags: Brad Keller, Felix Hernandez, Ian Kennedy, James Paxton, Jason Hammel, Marco Gonzales |
David Lesky
Follow @dblesky
I've been a Royals fan since the day I was born, and have had the opportunity to write about the Royals for nearly a decade now. The winning was better than the losing, but the losing is kind of familiar at least.
read more from David Lesky