The last road city the Royals will visit is the Queen City where they’ll take on the Cincinnati Reds, who are finishing up a campaign that has seen the rest of the NL Central lap them, though their season isn’t without its positives. For one, they’ve played much better under Jim Riggleman. They haven’t been good, mind you, but much better. For another, they have a legitimately solid offense, though it’s not without its warts too. Any team with Joey Votto has something to hang its hat on, though his power has been non-existent this year with just a .422 SLG and .138 ISO. Scooter Gennett and Eugenio Suarez give the Reds a trio in their lineup that any team would love to have.

The starting pitching, though, is rough. They have a lot of young arms to go along with Matt Harvey and 1-14 Homer Bailey, but they’ve all been somewhere between bad and average, so there’s a ways to go. But at least the bullpen has some promise with Raisel Iglesias at the back end. 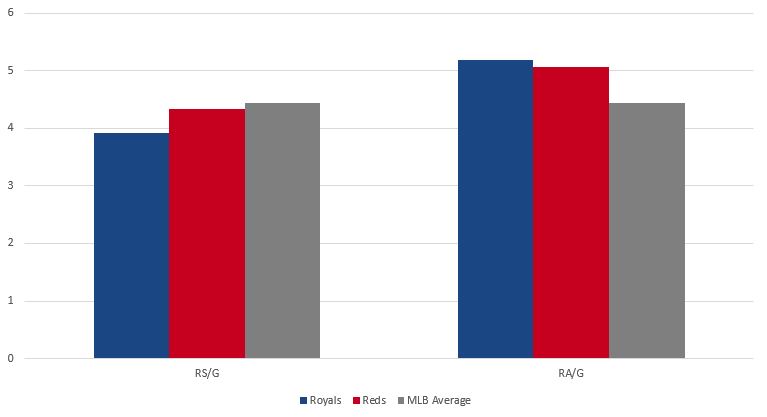 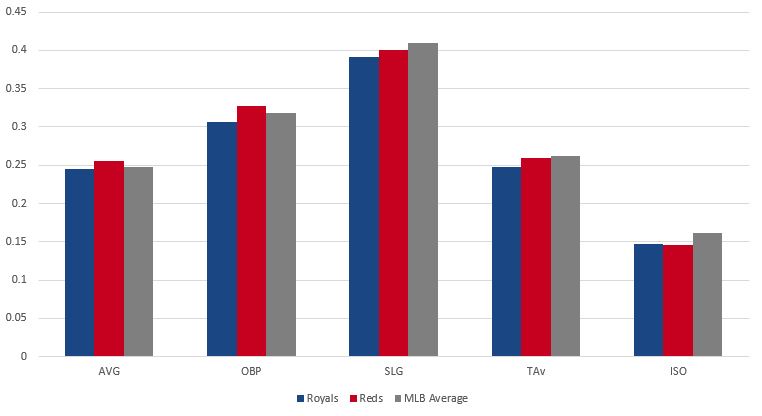 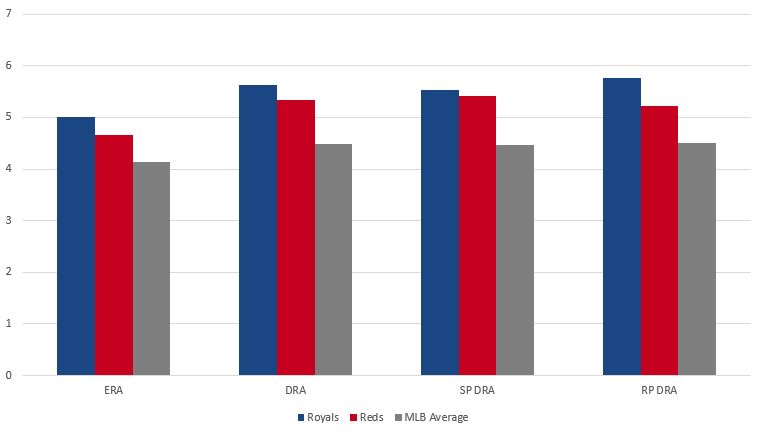 The Royals get to face one of the 2015 World Series heroes in this one, though they did face him once after the World Series, so it’s not Matt Harvey’s first time seeing the Royals blue since that fateful night. Still, it’ll be fun to relive some of that Game Five magic in this one where the Royals presumably broke Harvey to the point that he was dealt to the Reds after being DFAed. He hasn’t been bad in Cincy, though, with a 4.46 ERA and a solid strikeout to walk ratio. He’s still too hittable and not nearly what he was through 2015, but he’s been serviceable. He’s had a bit of an interesting September for the Reds, posting a 4.63 ERA that’s pretty well in line with his season number, but he’s gotten a ton of whiffs while also giving up his share of homers. It’s all just sort of incongruent, but I guess that’s the story of his career lately. He just doesn’t have the same putaway stuff he used to, and when hitters go up in the count on him, they have a chance to do serious damage. He’s allowed a .462 average and .923 SLG on 1-0 counts and a .556 average and 1.500 SLG on 2-0 counts. Lefties have raked him for power with a .222 ISO, so in that ballpark, I’d expect at least four Ryan O’Hearn homers.

Skoglund has now made two starts since coming off the DL (and one relief appearance) and the results have been quite good with a total of 13 innings pitched, seven hits allowed and just two runs with only three walks. Of course, he’s also only struck out six, which isn’t good at all. I still have plenty of doubts about Skoglund long term, so it’ll be good to get to evaluate two more starts of his since the Royals have shut down Brad Keller to get him an extra one on the final day of the season. One of the most shocking Skoglund stats that I thought I’d share is that opponents are actually at their best against him when they’re behind in the count with a .318 average and .541 SLG. That can’t happen.

Cody Reed also has ties to the 2015 World Series squad as he was dealt in the deal for Johnny Cueto, and he’ll make his seventh start of the season against the Royals in this one. Aside from an April start, Reed had pitched out of the bullpen exclusively in the big leagues until August 30, and he’s been outstanding in his last two, going 11 innings with no runs allowed on seven hit and with 16 strikeouts against just two walks. I really liked Reed as a Royals prospect and it seems he might be starting to show off some of that potential. He works heavily with a slider, throwing it nearly 41 percent of the time since his return to the rotation, and it’s been outstanding, holding opponents to a .186 average and .279 SLG and has been responsible for 21 of his 25 strikeouts. Watch out, righties. He hasn’t faced many lefties, but he’s been basically 50/50 fastball and slider to them and they’ve crushed his fastball. Given the roster, some lefties will have to play, so they better be hunting fastballs. He does tire out quickly with his OPS allowed going from .599 in the first plate appearance to .761 in the second to a whopping 1.194 in the third. If the Royals can wait him out, they can hit him.

I continue to have no idea what to make of Fillmyer. I think his slider is big league good, but he just gets roughed up sometimes and in situations that make me wonder how he ever has good starts. But then he goes out and has some good starts. He’s gone at least seven innings in three of his four September starts and was solid against Pittsburgh last time out. He’s actually started getting some more swings and misses, with his swinging strike rate jumping from just under six percent to just over nine percent in the second half. It’s still not quite enough, but I could see him faring very well in a swingman role on a better team. The Reds, as a team, are not exactly world class against sliders, so if he has it working, it could be another good start for him. Of course, his 7.22 road ERA makes me wonder.

Neither team is good, and I expect this series to be about whichever team is more into it. I’ll go ahead and say the Royals split it with the Reds, but I wouldn’t be too surprised if the Skoglund and Fillmyer both get hit around too much for the Royals offense to keep up.

Tags: Cody Reed, Eric Skoglund, Eugenio Suarez, Heath Fillmyer, Joey Votto, Matt Harvey, Raisel Iglesias, Ryan O'Hearn, Scooter Gennett |
David Lesky
Follow @dblesky
I've been a Royals fan since the day I was born, and have had the opportunity to write about the Royals for nearly a decade now. The winning was better than the losing, but the losing is kind of familiar at least.
read more from David Lesky