This is it. The final four games of the 2018 season are at Kauffman Stadium for the Royals as they welcome in the division champion Cleveland Indians for a season-ending tryst. In spite of their third straight division title, the Indians have to be considered underwhelming this year as they are pretty much living off their dominance of three doormats in the American League Central, going a combined 37-16 against them and 52-53 against the rest. Their lineup is part of the reason why as they do have the legitimate stars with two MVP-ish candidates and then they have some supporting cast, led by Michael Brantley (who might be better than supporting cast, but we’ll survive), but even with the addition of Josh Donaldson, it’s a lineup you can work around.

And they’ve been this underwhelming even while becoming the first team ever to have four pitchers reach the 200 strikeout mark. Their top four starters are top notch, but a struggling bullpen has led to some issues. The potential is there for true greatness with Brad Hand, Andrew Miller and Cody Allen, but it just hasn’t been there due to both injuries and poor performance. It’s worth noting that these four games will be tune-up games for the Indians, so their starters aren’t likely to go deep into games, though I guess you never know. 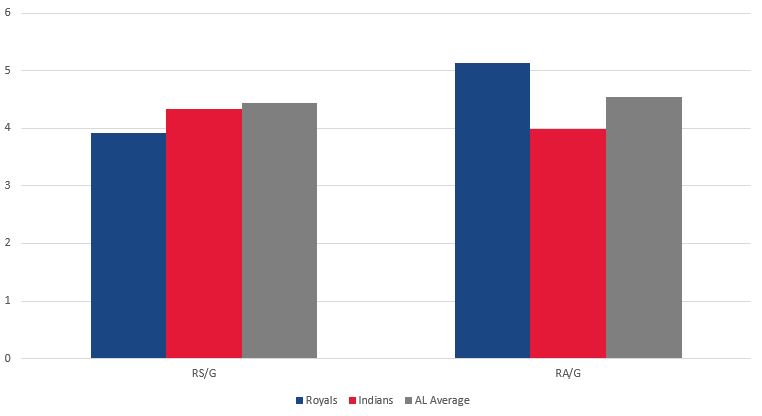 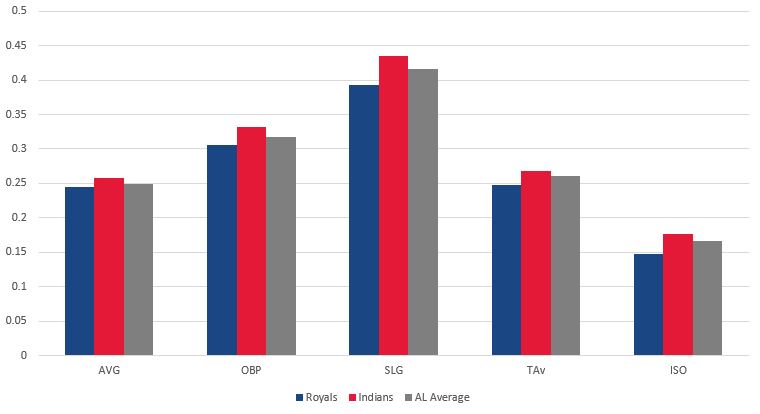 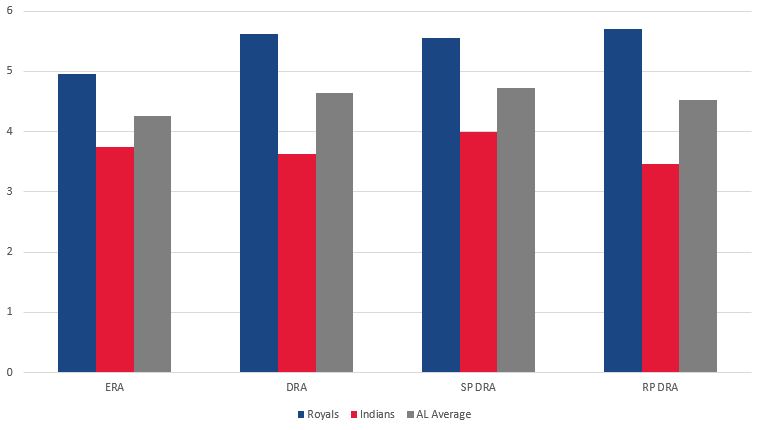 This was pretty much inevitable for Tomlin at some point and the fact that it has held off this long says a lot about him. He doesn’t have good stuff and spends so much time in the strike zone, so eventually he was going to bitten by the long ball more than he had before and this season he’s allowed 24 homers in just 65.2 innings, a total that might make Chris Young blush (sorry, Chris). He still has phenomenal control, but he’s just not missing nearly enough bats and he’s getting hit awfully hard with a barrel rate of 11 percent, nearly double the MLB average. It’s bad. He’s been in and out of the rotation in September, so he’s only a few days removed from throwing 76 pitches in a game, which means if they decide to go awhile with him, he can probably do it. But that said, do you really want him to? He’s allowed a .365/.412/.738 line to lefties while Ryan O’Hearn has absolutely mauled righties. If you’re picking up what I’m putting down and you play daily fantasy, you’re welcome. Of course if you didn’t already know that, you probably shouldn’t be wasting your money.

Sparkman will get his third career start in place of Jorge Lopez who was shut down after his rib injury and bad start his last time out. I do believe Sparkman can be a worthwhile reliever and am doubtful of him long-term in the rotation, though, so I guess it’s similar to a Lopez start. He relieved Lopez in his last outing, throwing 55 pitches over four innings and generally being okay, though the lack of swings and misses has me concerned about his future in any role. Still, it’s nice to see the mid-90s fastball and you’d think a secondary pitch could emerge that we just haven’t seen yet from him in the big leagues. This will be his first time going against Cleveland, so it’ll be a nice test for him even if he does only get bits and pieces of the regular lineup.

I feel like a lot of people are surprised at the season Clevinger is having, but if you watched him last year, you shouldn’t be. The stuff plays, and now that he’s got his walk rate under control, it plays even better. He’s deceptive too, which makes him incredibly difficult to hit. So while it’s surprising that he’s gotten to this point, I don’t think it is based on last season. He’s also been hit harder by lefties than righties, though not to the extent of Tomlin. That said, 13 of the 21 homers he’s allowed have been to lefties and 33 of the 58 extra base hits. He’s had some first inning struggles, allowing six home runs and 17 runs in his 31 starts, and the Royals know all about that having scored three in the first against him a few weeks ago at home before getting shut down by him the rest of the way. Including that start, he’s faced the Royals four times this year and gone 2-0 with a 2.33 ERA with just two home runs allowed (to Alex Gordon and Salvador Perez). So my guess here is that the Royals will be happy if they do treat this as a shorter tune-up.

If we’re being honest, I’d have never guessed that Kennedy has thrown more than 100 innings this season. I actually forgot he existed while he was on the disabled list. All that said, it’s hard to argue with the results in his three starts since he’s been back. He’s gone 19 innings, allowed 17 hits, six runs (four earned) with 16 strikeouts and five walks and posted a 1.89 ERA. He’s generally actually been really good. Of course, he’s been facing teams with nothing to play for but the offseason, but still, it’s better to be good in your only sample than bad. He’s faced Cleveland once this year and was outstanding, going six shutout innings and striking out eight to pick up his first win of the season. It was roughly four degrees that day, so that helped, but again, good results are better than bad.

Kluber probably isn’t going to win another Cy Young, but he definitely belongs in the conversation as he currently leads the American League in innings pitched and has some excellent results. For him, a mid-season funk of sorts probably cost him the award. He went 8-4 with a 3.94 ERA in 15 starts from June 16th to September 18th, which bumped his ERA from 2.10 to 2.93. Now, he was outstanding in his last start against the White Sox, going seven shutout inning with 11 strikeouts, but the overall numbers are probably a cut below the other candidates. The question that I think is fair to ask with Kluber is just how worn down he is. Since the start of 2014, he’s thrown 1,127 innings and faced 4,463 batters. That’s a lot. This year against the Royals, he’s 3-1 with a 3.24 ERA in four starts, but he’s been hit hard at Kauffman Stadium where he’s posted a 6.35 ERA and allowed eight runs on 16 hits in 11.1 innings. This game is, in fact, at Kauffman Stadium.

Junis had his first meh start of the year against the Tigers last time out, and it might be part of marring a really strong finish for him after allowing four runs on eight hits in three innings the time out before that one. But no homers allowed is a good thing, given the season he’s had, so he gets one last chance to go into the offseason on a high note. I’ll run the numbers as I do every start for him, but since coming off the DL, he’s gone 3-2 with a 3.38 ERA in 12 starts spanning 69.1 innings with eight home runs allowed. He’s struck out 66 and walked just 14. That’ll play. He’s been hit hard by Cleveland a couple times this year, but his last time out against them earlier this month, he allowed just two hits over seven shutout innings. More of that would be a nice way to finish his year.

The 2018 season wraps up with the Royals seeing Carlos Carrasco somehow for the first time since April 6th when he went six innings and gave up two runs on five hits. Now, think back to that time. Giving up two runs against the Royals then was basically like giving up five or six to a real team, so maybe that wasn’t such a great start. Of course, he is a legitimately very good pitcher and has found his way to another fully healthy, very good season. He strikes out a ton of hitters, doesn’t give up a crazy amount of hits and doesn’t walk guys. No, he isn’t an ace, but he’s a heck of a number two. If you’re looking for a weakness, he’s actually been at his worst when he’s first starting a game, though that’s if you can call that his “worst” as he’s given up a .253/.287/.406 line. Still, though, he’s allowed 10 of the 21 homers he’s allowed all season in just 35 percent of the plate appearances. He’s 10-6 with a 3.55 ERA in 23 games against the Royals in his career. Whit Merrifield has really enjoyed hitting against him in 16 plate appearances, putting up a .500/.533/1.000 line. That’ll play.

And the season wraps up with Eric Skoglund throwing the first pitch, so that’s…something. Though I should be fair to say that he’s been really good since he came off the DL and I was actually disappointed that his last start got cut short because of the rain delay in Cincy. In four games, he’s gone 15.1 innings and given up just eight hits and two runs to lower his ERA by 1.3 runs. He’ll be making his third career start against the Indians. The first two were both last year and didn’t go so well. He lasted 3.1 innings combined and allowed 11 runs on 11 hits with three strikeouts and four walks. So yeah. Happy last day of the season!

This is the toughest series of the year to predict because who knows how the Indians are going to play it? Do they want to stay completely fresh and everyone will play or do they want to take the opportunity to rest guys and play their bench a little bit before the postseason? My guess is we don’t see guys for too long unless they need the reps like maybe Josh Donaldson. I’m going to go out on a true limb here and say the Royals take three of four and give us some warm and fuzzy feelings to take into the offseason.

Tags: Carlos Carrasco, Corey Kluber, Eric Skoglund, Francisco Lindor, Glenn Sparkman, Ian Kennedy, Jakob Junis, Jose Ramirez, Josh Tomlin, Mike Clevinger, Ryan O'Hearn, Salvador Perez, Whit Merrifield |
David Lesky
Follow @dblesky
I've been a Royals fan since the day I was born, and have had the opportunity to write about the Royals for nearly a decade now. The winning was better than the losing, but the losing is kind of familiar at least.
read more from David Lesky