Pick your favorite baseball adjective for an amped-up fastball and it applies to Kelvin Herrera’s heater. Over the last three seasons, Herrera’s fastball has averaged a tick over 98 mph. That’s convection oven hot. Of the 532 pitches he threw that PitchF/X classified as a four-seam fastball, 143 – or over a quarter – topped the 100 mph mark. The only other pitcher who throws harder is Aroldis Chapman.

He generated a miss over 30 percent of the time when the hitters swung. Should they be fortunate enough to actually put the ball in play, the opposition managed just a meager .217 batting average.

His heater was complemented by a change that averaged around 90 mph. Featuring similar arm action and eight mph of separation, the change was a tantalizing pitch that hitters were well out in front of when they offered. When hitters did swing at the Herrera change, they drew air a whopping 40 percent of the time. When the opposition digs in the box and sees back to back fastballs in the neighborhood of 98 to 100 mph, the bat is sped up so when the change makes it’s appearance… forget about it.

It’s understandable if you need a moment to collect yourself after watching those videos.

The fastball/change-up for Herrera can be a devastating combo, but he’s searched years for a third pitch. It’s usually been a gently-used curveball that he will feature. Herrera has thrown the curve, usually as the second pitch when he jumps ahead in the count after his first offering. He’s less apt to feature the curve as a strikeout pitch. It’s just that he doesn’t trust the curve.

Around the All-Star break last summer, Royals pitching coach Dave Eiland approached Herrera with an intriguing thought. How about trying out a slider? Herrera had featured a slider in his early days as a starter in the minor league system, but he shelved the pitch when he moved to the rotation. It was decided he would dust off the pitch. Why not?

Herrera’s pitch breakdown for the first half of 2015 mirrored his selection for the last three years since he emerged as a dominant relief option for Ned Yost.

One slider in the first half.

Herrera utilizes the same grip for his slider as he does for his two-seam fastball. It’s interesting to see how his reliance on his sinking fastball declined in the second half of the season as he incorporated the slider.

Fewer sinkers, no curves and a slider almost seven percent of the time.

When opposing batters swung at Herrera’s slider, they missed 27 percent of the time. That finally gave Herrera that third killer pitch he was searching for, and the second one that played off his triple-digit heat. Opponents hit just .143 off his slider. The hits he surrendered on the pitch were singles. His slider averaged around 85 mph, giving him another variation in velocity to keep hitters off-balance.

Herrera really leaned on the slider as the Royals rolled through October. He threw his slider 25 percent of the time, making it the primary compliment to his fastball. When an Astro, Blue Jay or Met swung at his slider, they missed 52 percent of the time. Only five of his 43 sliders thrown were put in play. Just one fell for a hit. 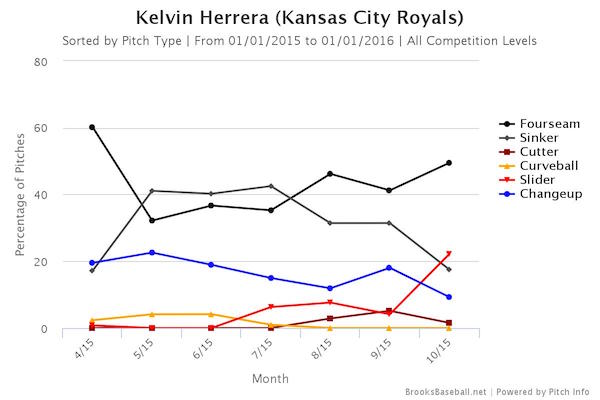 The power of the slider affected his other pitches in October. His change-up got a miss on a whopping 57 percent of swings. Eleven of his 19 postseason strikeouts came on his fastball. Basically, Herrera spent the second half of the regular season refining his rediscovered slider. He spent October laying waste to the opposition.

Herrera has averaged 8.7 SO/9 for his career, which, given his fastball/change-up repertoire, is low. PECOTA projects an 8.2 SO/9 for the coming season. But if Herrera continues to feature the slider, take the over.

The Royals bullpen was scary enough with the collection fondly known as The Cyborgs. The fact they are still looking to improve, and being successful at that, should delight Royals fans and scare the bejesus out of the rest of the league.

Tags: Kelvin Herrera |
Craig Brown
Follow @CraigBrown_BP
Craig has been covering the Royals at various outlets for 14 years. His work has appeared at various websites, including Sports On Earth, Baseball Prospectus, ESPN, The Hardball Times, and SB Nation. Reach him at craig.brown@baseballprospectus.com.
read more from Craig Brown