Danny Duffy has had what one might describe as an enigmatic career. He was a top prospect, then a struggling rookie, then an injured pitcher, then an impressive starter, then an inconsistent starter, then an electric reliever, and now he finds himself among the bevy of talented arms in the Royals’ bullpen. At some point this year, it’s quite possible, even likely, the team will need him to make a few starts, but for now his new role will be to bridge the gap between the rotation and the finely-tuned machines waiting for the last three innings.

In looking at Duffy for the 2016 season, it’s difficult to project exactly who he might be. Will he look more like the 2014 version of himself, inducing popups and lazy fly balls regularly? Or will he resemble last year’s Duffy, who gave up far too many line drives and well-struck flies?

Some of Duffy’s struggles in 2015 were caused by BABIP regression, as his .234 BABIP allowed in 2014 didn’t line up with his career norms. Last year, that number ballooned to .298, and although it’s possible the luck may have swung too far in the opposite direction, Duffy definitely earned some worse results. His line drive rate rose to 27.4 percent a year after sitting at 20.7 percent, and his fly ball rate fell to 21.9 percent in 2015, from 29.2 percent in 2014. Combined with a slight decrease in his popup rate, it’s easy to see how Duffy’s BABIP spiked.

Duffy also had a much larger problem when batters held the platoon advantage last year than he did in his breakout 2014 campaign.

He was death on lefties that season, holding them to a .162 TAv, three extra-base hits, and a total of zero home runs. Among starting pitchers, only Tyler Matzek and Chris Sale did better against southpaws. Go ahead and read those two names again, and a third time if needed, because one of those names is quite surprising. It’s hard to believe he really was that good, but I double-checked, and it’s true. Sale actually was excellent against left-handed batters. You really can’t predict baseball.

Against righties, Duffy allowed more damage, but he did hold them to a below-average .256 TAv. That is a drastic split, but because he was so effective against lefties, he could live with a more pedestrian line facing righties.

In 2015, he more than held his own facing same-side batters, although there was a jump in the opponents’ production, as he allowed just a .211 TAv in those plate appearances. He still didn’t allow a dinger to a left-handed hitter*, but there were a few more pitchers who got better results than him.

*Fun fact: Duffy hasn’t allowed a regular-season home run to a lefty since August, 27, 2011. Since then, he’s faced 321 left-handed batters, and not one of them has left the yard. Oh, and that last lefty batter to homer off of Duffy? Jim Thome, who will be on the Hall of Fame ballot in less than two years.

The real difference was against righties. Among pitchers who faced 300 right-handed batters in 2014, Duffy’s .256 TAv allowed ranked right near the middle, in the 47th percentile. Last year, he allowed a .281 TAv, which put him in the 16th percentile. It wasn’t that Duffy excelled against righties in 2014. It was that he got destroyed by them in 2015.

First, let’s look to see if there were any parts of the zone that gave Duffy the most trouble against right-handed batters. We could use batting average, but I think slugging percentage may tell the clearest story. 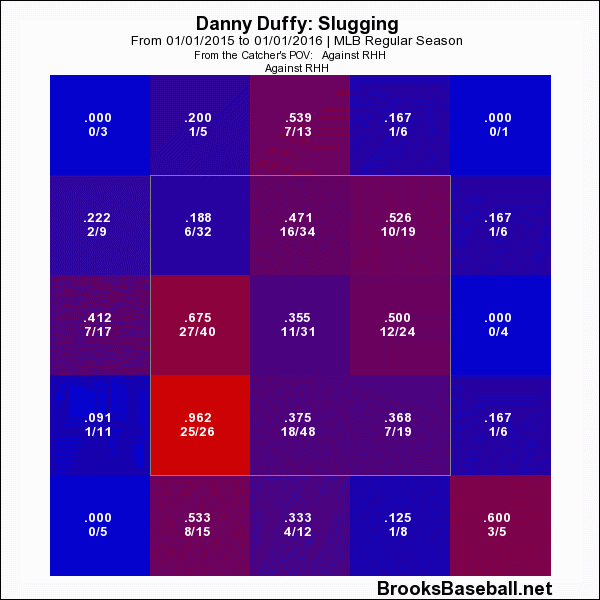 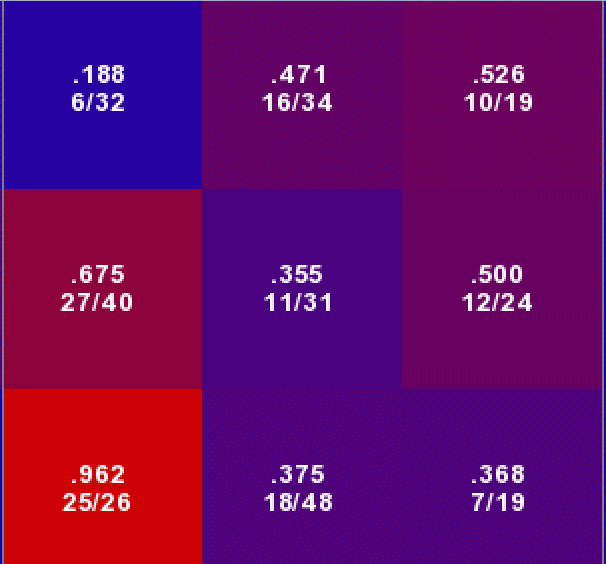 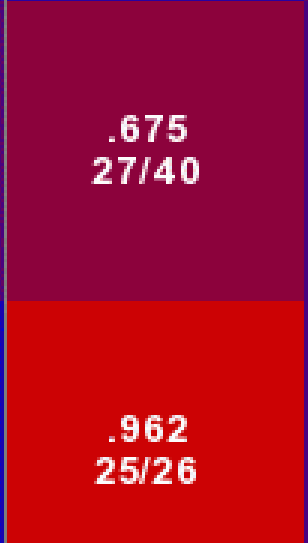 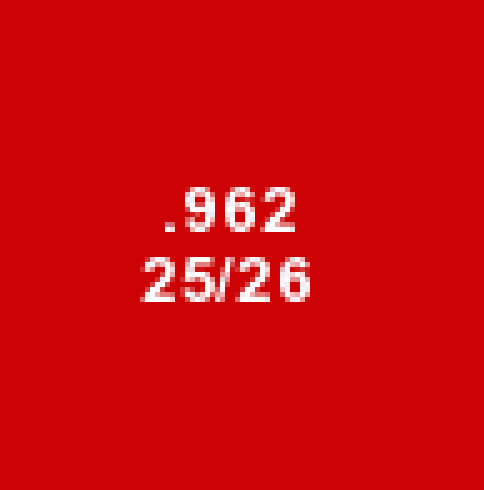 Upon investigation, it appears that Duffy should literally never throw another pitch on the inner third, especially down in the zone, to a right-handed batter, ever again.

The only problem with this advice is that Duffy actually threw more pitches to that trouble area while facing righties in 2014 than he did last year. This is probably why I’m not a pitching coach. There could be something to decipher from those charts, but it may require cutting the numbers into smaller samples, which doesn’t necessarily help.

Duffy’s pitch mix against right-handed batters didn’t drastically change from one year to the next, with the exception of an increase in his slider usage at the expense of his curveball. I found it interesting that he didn’t shy away from attacking opposite-side batters with his breaking ball, although that may have had something to do with his changeup getting repeatedly crushed when thrown to righties, who hit .315 with a .556 slugging percentage against it last year. Duffy also was ineffective with his sinker against righties, allowing a .357 average and .571 slugging percentage.

Because sinkers and changeups tend to have similar movement patterns, perhaps we can find if there’s something going on with those specific pitches. There is a potentially large caveat here, and it’s the possibility that some or many of Duffy’s sinkers according to Pitchf/x are actually four-seam fastballs, in which case the following several hundred words will essentially be a waste of time. But it will be our waste of time together, and baseball is meant to be shared.

Among the 143 pitchers who threw at least 200 sinkers in 2015, Duffy’s sinker averaged the third-highest vertical movement in the group. In other words, his sinker dropped less than all but two other pitchers’. The horizontal movement on the pitch was far less extreme, and it actually resembled the sinker of Dallas Keuchel in that regard. But because Keuchel’s had much more sink, he generated far more grounders with it. Duffy’s groundball rate on his sinker was 41 percent, the tenth-lowest in the game. His line drive rate, however, was 39 percent, third-highest among those pitchers.

Meanwhile, his changeup also averaged the third-highest vertical movement in a group of 92, and while it’s possible to succeed with that kind of movement on a changeup (see: Estrada, Marco), Duffy hasn’t been able to find that success. He does get quite a bit of horizontal movement (similar to those of Stephen Strasburg and Francisco Liriano), and even induces popups with the pitch about as well as anyone in baseball.

The pitch does have potential, and I do think Duffy could improve the effectiveness of his changeup by going completely away from his sinker, particularly if he is able to command his four-seamer and changeup in the same way Estrada does. It seems to me that the sinker is too much of a blend between the four-seamer and changeup, which may not give Duffy enough of a distinct look, particularly when he’s facing right-handed hitters. Much in the way that Zack Greinke felt a cutter took away from the effectiveness of his slider, Duffy’s sinker might be holding his changeup back.

As an added bonus, now that he’s in the bullpen, Duffy can further simplify his arsenal, primarily throwing the fastball and slider, while working on sharpening his changeup. Maybe he can tinker around with different grips. Maybe he can try a few different manipulations with his fingers and wrist action.

Without a need for a consistent third pitch, the changeup can become a project again. He’s surrounded by pitchers with excellent changeups, as well as a great pitching coach, so he can spend plenty of time listening to pointers. And rather than sitting around for four days, waiting for his next chance to try something out, Duffy will have more opportunities to get back on the mound and regularly experiment with any new tricks.

An improved changeup – whether that means getting more drop, better command, more deception, or some combination thereof – will give Duffy a significant edge if and when he’s called upon for starting duties once more. He’ll still be able to use his slider against righties, but having that third weapon should help to even out his platoon disadvantage.