The Royals, you may have heard, are not a team that strikes out very frequently. Last year, they had the lowest strikeout rate in baseball, and it wasn’t particularly close. The lineup is filled with players who tend to avoid strikeouts like they’re a modern-day plague on baseball, which is good considering that’s essentially what they are. That’s a discussion for another day, however.

Among the eight everyday players in the Royals lineup, not a single one has a career strikeout rate above 21 percent. Only two of them have career strikeout rates above 17.6 percent. Strikeouts have never been a major problem for this Royals lineup. That is, until this season. Although, to be specific, strikeouts have really only been a major problem for two Royals: Alex Gordon and Lorenzo Cain.

Gordon is having a few different issues that I or one of my colleagues will dig into later this week, but Cain’s strikeouts have stood out to me. It seemed like he had gotten called out on strikes several times on borderline pitches, which could help explain the spike in his strikeouts.

Cain has struck out 15 times in his 51 plate appearances, which is a rate of 29.4 percent. The following image (courtesy of Baseball Savant) shows each of those 15 third strikes. 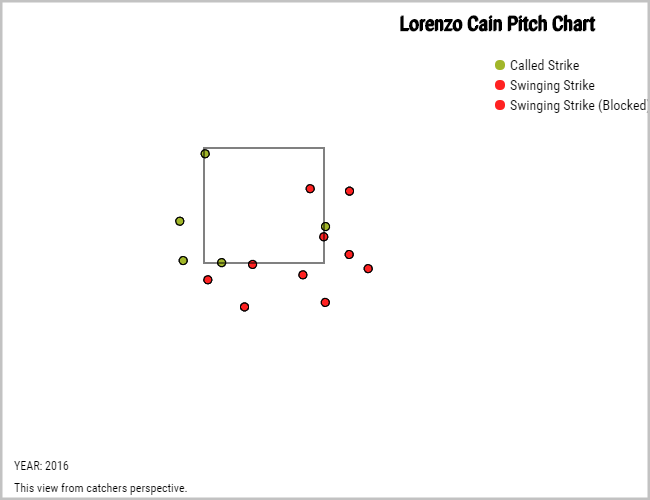 Apparently my eyeballs have not deceived me. Cain has struck out looking five times, and each of those five pitches was either out of the strike zone, or it was near an edge.

Let’s take a quick look at all five of the called third strikes, to see if there’s anything to glean from them. 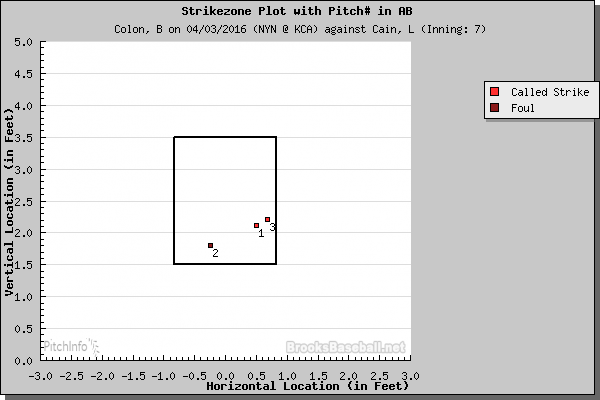 Obviously I’m not in Cain’s dome, but on an 0-2 pitch, it looks like he was expecting something not in the zone. Or maybe he was simply distracted by Colon’s beauty and grace. Either way, Cain probably should’ve been more prepared for that fastball. 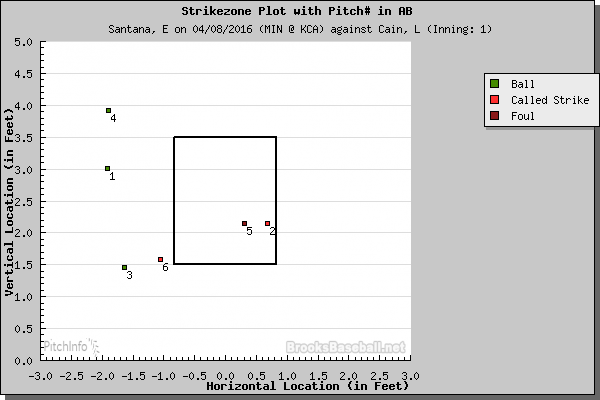 This was simply a bad call. Santana got away with a fastball the pitch before, catching too much of the plate, but Cain only fouled it off. He followed it up with a slider off the inside edge that the umpire apparently liked more than he should have. This was a 3-2 pitch, so Cain probably deserved to take his base after it. 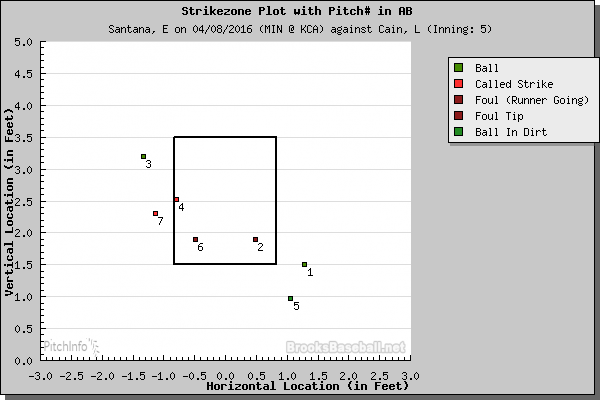 April 8th was a rough night for Cain. This time, Santana followed up back-to-back sliders with a 3-2 fastball in off the plate, but once again the umpire rewarded him with a called strike. A correctly called ball would’ve resulted in a bases loaded situation for Eric Hosmer. This call resulted in a sad Lorenzo Cain.

Before looking at the strikezone plot, here’s a screenshot of the pitch. 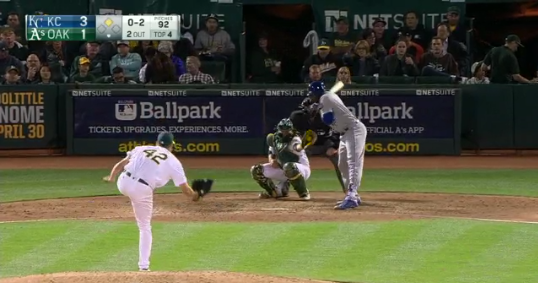 First of all, it’s impressive that Hill was able to deliver a pitch while doing an impression of a flamingo. Personally I think the flapping wings are a bit much, but I can’t downgrade him too much. Second of all, the camera angle may be distorting where the pitch actually was, because it appears to have been a good call. 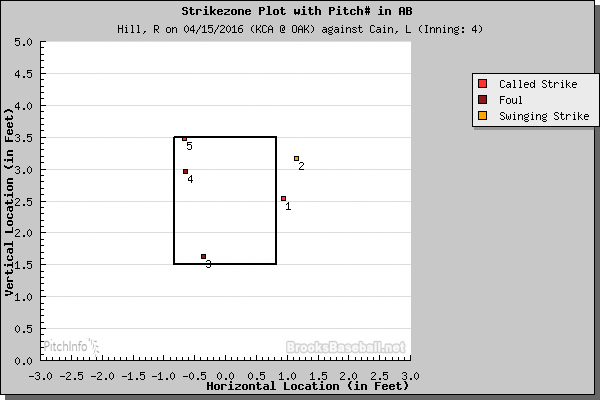 Hill’s command was all over the map all night, so it was difficult to predict where he’d be throwing the ball. Cain had just fouled off a pair of curveballs on the inner half, while he had fallen behind on a pair of outside pitches. The catcher wanted the pitch outside again, but Hill missed his spot badly. He still got a strikeout, because baseball is a cruel game, particularly if you’re a batter. 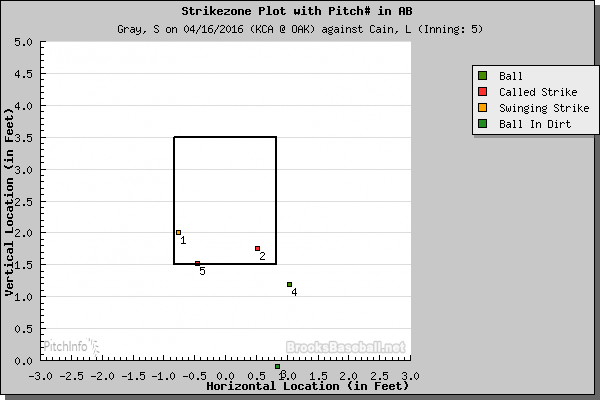 Cain definitely could’ve at least tried to hit the pitch, but I don’t think he would’ve been able to do much with it. Gray threw a 2-2 fastball right at the bottom of the zone, where it would’ve been extremely difficult to square up. He had just thrown a pair of offspeed pitches down and out of the strike zone, and he followed it up with a perfectly placed heater. Sometimes the pitcher is just better.

I’m not noticing any real patterns, but then again, it’s a sample size of five, so we shouldn’t expect to discover something revolutionary. Cain’s line would look a bit better if the two bad calls had gone his way, though it wouldn’t move the needle too much.

Beyond the called third strikes, Cain’s swinging strikeouts are having a bigger impact on his production, and one of the things that may help him avoid chasing is to be slightly more aggressive on pitches in the strike zone.

Now, he is seeing fewer strikes than ever before, which may mean he’s in better position to let a good pitch go by, but a handful of his strikeouts have included called strikes on 0-0, 1-0, and 1-1 counts. The Royals don’t need him to swing at bad pitches early in counts, but a little more aggressiveness on strikes could keep him away from the pitchers’ counts that often lead to ugly swings.

None of this is to suggest Cain has been a net negative in the lineup, of course. Because he’s not swinging at too many pitches out of the zone, he’s drawn a team-high seven walks already, which is almost a fifth of the way to his career high from last season. His .333 on-base percentage is tied for second-best among the team’s regulars, and while that in itself may say more about the rest of the team, it also shows he’s not a problem.

But Cain does have plenty of room for improvement, and based upon his last few years of production, there’s no reason to doubt his ability to enact those improvements. He’ll need to protect a bit more in two-strike counts, and he could get back to swinging at a few more pitches in the strike zone, particularly early in the count, but as David Lesky pointed out yesterday, it’s still early. There isn’t much reason for worrying at this point in the season, and that’s especially true with Cain. Despite the gaudy strikeout numbers, he’s been fine, and he’s likely going to get better from here.