There were about 30 scouts in attendance for Joey Wentz’s last regular season game. The Shawnee Mission East left-handed starter dominated an overmatched Shawnee Mission South lineup following a pair of hits given up to the first two hitters of the game. After those hits, Wentz used benefited from a baserunning error to escape the inning scoreless while he and his teammates essentially ended the game in the bottom half of the inning. The East crew scored 10 runs in the bottom of the 1st that included a home run to left-center off the bat of Wentz that exhibited his smooth and easy power.

On the hill, Wentz was 89-93 mph, showing an ability to attack all quadrants of the zone including the bottom half, which he can get to with easy downhill plane. Along with the fastball he showed a real feel for a curveball which has nice shape and a feel for being able to place it in and out of the zone. 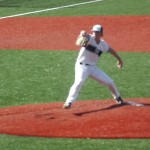 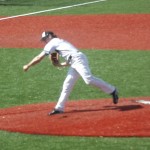 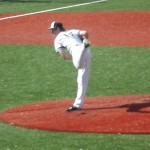 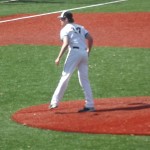 The biggest pluses for Wentz from what this amateur scout can see are a real projectable body that can add easy weight which could help him gain velocity on the fastball and handle the riggers of a long major/minor league season. That and a fiery attitude that had him attacking hitters in a game that showed itself to be over early. That attitude came to the surface when the lefty told a hitter to sit down when he questioned whether or not Wentz’s catcher had caught a foul tip strike to end an at bat.

The likely first round pick will need to refine the change up that he rarely uses to reach his front of the rotation projection he’s being given.