This isn’t a worse-case scenario. (That would’ve been a sweep.) But this feels pretty damn close. One night after doing everything right against the worst team in baseball, the Royals left the bats in the rack and stumbled to another shutout loss.

We’ve seen this kind of action before. I think back to the Astros sweep of the Royals back in 2014. You remember that series, right? If not, a refresher: The Royals dropped three games at home to drop to fourth place in the Central, six and a half games back of the division leaders. It was the series where panic went into overdrive. The Astros were coming off three consecutive seasons of tanking. They weren’t competitive, but they handled the Royals. It was ugly.

We’re not at that point. Yet. However, what seemed unthinkable when the season opened six weeks ago now feels real. This was not a good game.

Dillon Gee pitched a helluva game. For five innings, he was darn near great. He worked with purpose and kept Atlanta bats off balance. Mixing his low 90s fastball with a knuckle-curve and cutter, he got 10 swings and misses, needing just 59 pitches to motor through five innings. He allowed three baserunners, two of whom were gunned down by Salvador Perez on stolen base attempts. It was exactly the kind of start the Royals needed. With Danny Duffy slated for around 50 pitches on Sunday, Gee needed to go relatively deep in this one to save the bullpen from some early strain. Through five, Gee was cruising.

Then came the sixth.

Gee didn’t make poor pitches in the frame. And apart from the Nick Markakis walk, was working ahead in the count. It was just one of those damn things where the Braves were making contact. Here are the locations of the pitches the Braves put in play in the sixth. 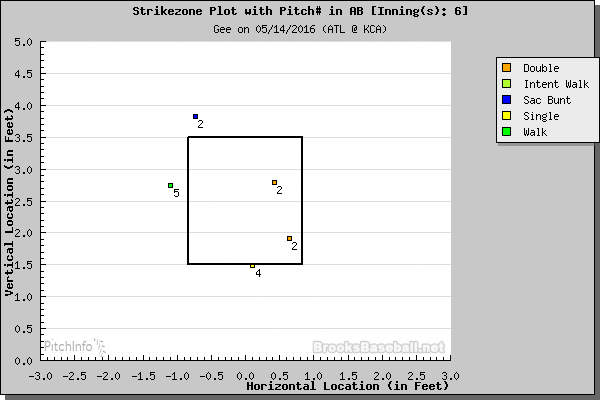 The Ender Inciarte double that opened the scoring was in the fat part of the zone, but the pitch that did the real damage, the Kelly Johnson single, was on a breaking ball that dropped out of the zone. With two strikes against him, Johnson was protecting the plate and flared one to left.

That inning was kind of a microcosm of the Royals season. You think everything is going fine, then everything goes to hell.

In the sixth inning, Gee tired. Mallix Smith led off with a double and was sacrificed to third. After a Nick Markakis walk, Ender Inciarte doubled to right to break the deadlock. That double pushed the Braves Win Expectancy 16 percent to the good and set up a larger moment in the contest.

The Royals had not ordered an intentional walk since April 16. In fact, Ned Yost has called for just a pair of free passes all season. That’s Yost’s modus operandi. He’s as hands off as a manager can get, preferring to let his players dictate the outcome of the game. On Saturday however, Yost chose to walk Braves first baseman Freeman with runners at second and third with one out and one run across. On the surface, it seems like a logical move. Freeman is by far the best Braves bat in the lineup and it sets up a double play. However, I thought it was the wrong move at that particular point in the game. You simply don’t want to give free baserunners with so many outs needed.

Those fears were realized when Johnson singled, bringing home those runners in scoring position and putting the Braves up 3-0. That was more than enough.

Once again, the Royals offense was feeble. It’s not that they didn’t have opportunity. They just failed to do anything beyond a couple of baserunners in any single inning.

In the first, Lorenzo Cain singled and stole second. Eric Hosmer singled, with Cain stopping at third. With runners on the corners, the Royals had something going. At least until Hosmer was picked off first and Kendrys Morales struck out.

In the second, Perez doubled with one out, but Cheslor Cuthbert and Christian Colon couldn’t bring him home.

In the eighth, Paulo Orlando doubled with one out, but Alcides Escobar and Lorenzo Cain couldn’t bring him home.

In between the second and the eighth innings, the Royals bats were in cold storage. They managed just a pair of singles over those frames. And upholding a fine Royal tradition, no walks.

Remember how we said it was vitally important for the Royals to take at least two of three from the Braves? Hold on to your butts.

Tags: Dillon Gee |
Craig Brown
Follow @CraigBrown_BP
Craig has been covering the Royals at various outlets for 14 years. His work has appeared at various websites, including Sports On Earth, Baseball Prospectus, ESPN, The Hardball Times, and SB Nation. Reach him at craig.brown@baseballprospectus.com.
read more from Craig Brown