As you know, Alex Gordon was placed on the disabled list on Monday with a fractured scaphoid. As you also know, he was struggling badly before the injury to a bone that could impact the rest of his season after he returns. But what’s going on with him?

So he’s been at this point before. Just not as “Star Left Fielder Alex Gordon.”

What’s happening with him? He’s hitting just .211/.319/.331 with the worst strikeout rate of his career by far. Every few games, it looks like he might be coming out of it, but then he goes through four more where he looks just as bad as he has most of the season.

Let’s check out some of his batted ball facts.

Maybe the ground balls being down and the fly balls being up are hurting his average some, so that’s an interesting point to look at, but as far as how hard he’s hitting the ball, there doesn’t seem to be a real issue there.

He’s always been a player who succeeded by pulling the ball a lot. The shift didn’t seem to hurt him much for whatever reason. In his career when he pulls the ball, he’s hits .404 with a .705 slugging percentage. When he goes up the middle, the drops to .327 with a .510 SLG and going opposite field yields fairly similar results (.330 average, .501 SLG). So pulling the ball seems to be a good thing for Alex.

Take a look at his results on various pitches throughout his career, courtesy of the great Brooks Baseball.

This first chart is his numbers from 2007 through last season. 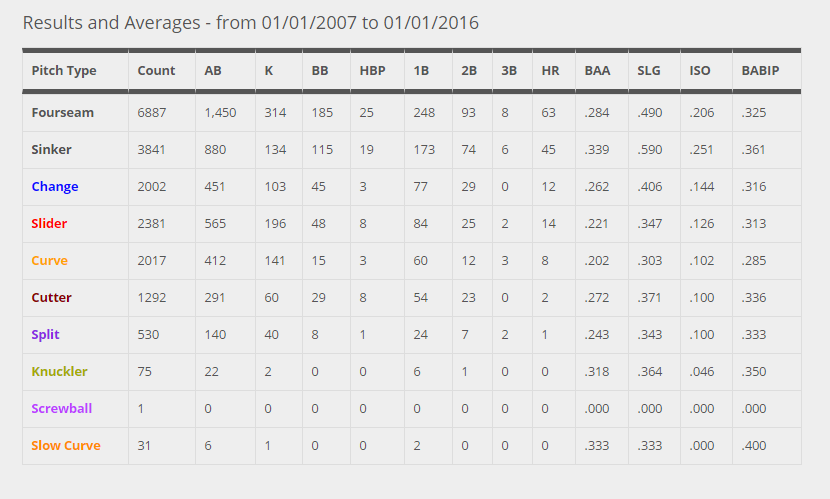 This next one shows what he’s done this year. 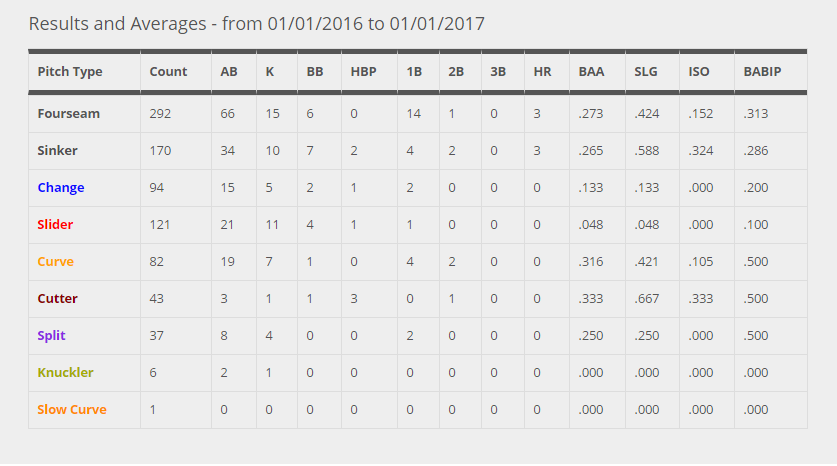 You can see the differences. The sample is obviously miniscule, so take it for what it’s worth, but he’s not driving fastballs for power, he’s not hitting for average on sinkers (probably the ground ball percentage dropping) and he’s having the absolute worst time with changeups and sliders. On the rest, the sample is way too small to make any kind of observations. Sure, the other samples are small too, but not that bad.

Now this is the portion of the article where I use my eyeballs to watch games and tell you that I think Gordon is a tick behind on fastballs this season. What I can’t tell you is if it’s a temporary timing issue or a him getting older issue, but I think he’s been behind them. Which leads to what I think is happening here. He’s gearing up for the fastball and then getting fooled badly by off speed stuff.

It all sort of begins to add up. By being way out in front of a pitch like a changeup, he’d likely roll it over, which would lead to his numbers on balls he pulls to be way down. By being behind on fastballs, the good contact he makes would lead to a hit, but it might be to center rather than right like it used to be. And by having to cheat to catch up with a fastball, there would be situations where he flat out swings and misses. And there are other situations where he’s caught having to guess for a certain pitch and then ends up watching strike three, although he’s not striking out looking at a significantly higher pace than he had previously.

Using career strikeout percentages for all non-hard stuff puts Gordon’s strikeout rate at 25.3 percent. That’s still high for him, but it’s much closer to being in line with his career before this season.

Take a look at how pitchers are attacking him with the hard stuff. In 2014 and 2015 (and before too, but you get the idea), he was pitched away with hard stuff. Now, though, I think pitchers know they can get it by him, so they’re able to challenge him farther inside and he’s having trouble getting the bat head in front to actually drive that pitch.

So now you wonder, is this fixable? I don’t know why this is happening. It could very well be that Gordon has aged and simply can’t catch up with a good fastball anymore. I know that on Sunday, he was way late on a couple fairly pedestrian fastballs that we’re used to seeing him drive to the gaps. It could be that he was simply struggling to get his timing down before the unfortunate injury. We won’t know for awhile if this is a blip or the start of a decline. I can’t imagine he’d decline that fast, but you never know.

What’s troubling is that now he’s dealing with returning from a wrist injury, which can be extremely tricky to come back from. Let’s say he’s ready to go in four weeks. That puts us in late June already. He’ll likely need some time in the minors on a rehab assignment. That puts him back in the big leagues by maybe the All-Star break if all goes well. Even with a rehab assignment, it seems likely that he’ll need a little time to get his feet wet again. So now we’re talking about early August before he’s back to being Alex. Of course, who knows if his power will be sapped from the injury?

The best thing the Royals and Gordon can hope for now is that the time off helps him shake off whatever issues he was having before the injury and there are no ill effects the rest of the season. Maybe the Royals can win without Gordon, but it’s pretty clear their best shot is to have a healthy and effective Gordon patrolling left and providing his usual solid offensive performance.

Tags: Alex Gordon |
David Lesky
Follow @dblesky
I've been a Royals fan since the day I was born, and have had the opportunity to write about the Royals for nearly a decade now. The winning was better than the losing, but the losing is kind of familiar at least.
read more from David Lesky

1 comment on “Alex Gordon, Struggles with Fastballs and a Broken Wrist”