It was such a promising start. In his return from suspension, causing him to miss one turn through the rotation, Yordano Ventura dazzled in the first. He pumped four consecutive fastballs to the opening batter, Matt Carpenter, before striking him out with a nasty change. Brandon Moss was next and Ventura showed only one fastball while blinding him with an array of offspeed stuff to record his second strikeout. Finally, he broke off his fastest pitches of the evening in two fastballs to Matt Holliday, getting him to ground out to end the inning.

As we have learned, Ventura has the capacity to either delight or frustrate. There seems to be no in between. And sometimes, the emotions change inning to inning.

A leadoff double in the second, followed by a run scoring single. At this point, is it frustration? Ventura unleashes five consecutive fastballs to Jhonny Peralta, four of them missing the zone. The fifth, was a borderline 3-0 call in his favor. If you were go look back and pinpoint the turning point in the game, or maybe it was the telltale moment, it was the Peralta plate appearance. Things weren’t going Ventura’s way, but instead of focusing on limiting the damage, he unleashed his untamed fastball and couldn’t hit the target. Buckle up.

The second was a long inning for Ventura. He labored through 29 pitches for his three outs and the Cardinals plated three runs. Ventura rallied, retiring six of the next seven, but hit a wall in the fifth. Three batters into the sixth, he was gone.

It was a disappointing performance in that Ventura was unable to build upon his two prior solid starts. You can’t win them all, as they say, but a better showing would have been ideal. Maybe it was rust in not having pitched for nine days? Who knows. Whatever the reason, it just wasn’t his night. Even though you could have bought high on him after the first.

As if Ventura’s performance wasn’t frustrating enough, Lorenzo Cain pulled up lame in the seventh trying to beat out an infield hit. It looks like his left hamstring tightened up as he was decelerating after running through the bag. According to the Royals, we will know more tomorrow.

Cain has that “injury prone” tag, but don’t buy that. He’s worked a ton to keep his legs healthy and it’s paid dividends. Not counting postseason, he played 273 games from 2014 to 2015. His last trip to the DL was in April of ’14 with a groin strain.

For all the injuries the Royals have suffered in the first half, Cain is a key guy they cannot afford to lose for any length of time. His plus defense combined with a bat that started to come around in May before sliding a bit in June, Cain is the Royals leader in WARP at 2.1. No, a healthy Cain is vital to the Royals postseason aspirations.

Production From The Bats

I suppose we could say some nice things about the offense. Eric Hosmer picked up a couple of hits. Kendrys Morales continued his June resurrection. The six through nine spots in the order each had a hit and drove home all four of the Royals runs.

The opportunities were there. The Royals just couldn’t capitalize. The focus will probably be on the ninth, when the Royals loaded the bases with one out and couldn’t score. Alex Gordon missed a meatball and popped out to third in foul territory.

Here’s what was so frustrating about the Gordon at bat. He saw five pitches and all five were fastballs. Yet he drug the barrel late through the zone and dropped the head on a pitch hungry hitters make a meal of. 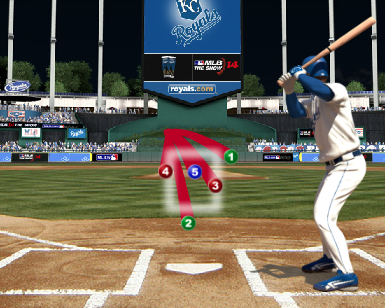 Seriously, he’s not going to get a better pitch to hit. And after seeing four fastballs previously, he should have had his timing down. Ugh.

Hosmer grounded up the middle for the final out of the game.

The series shifts across the state for the next two games. Edinson Volquez who was rocked in his last start (and ejected on Tuesday) will make the start.