The All-Star break is a good time to take a breather and also look ahead to the rest of the season. If you find yourself in a pennant race, like the Royals do, you might start doing some math* with the remaining schedule. You know, if Cleveland goes .500 the rest of the way, what do the Royals have to do to catch them? That sort of thing.

*Why is it that doing baseball math is so much more fun than doing any other math?

So let’s indulge. What does the Royals’ schedule look like the rest of the way? And how does it compare to the teams the Royals are battling for a playoff spot?

I have a fairly simple method for figuring out the remaining strength of schedule. Multiply the number of times Team A plays Team B by Team B’s wins and losses. Add it up for Teams C, D, etc., and there you go. I also do this exercise using the concept of third-order wins from Baseball Prospectus. Third-order wins is somewhat like Pythagorean wins, except better in my opinion because it does give you a little better idea of a team’s true talent level.

When I did this exercise in previous seasons, I didn’t really try to predict a team’s final win total. But I’ve decided to try it now. Using the log5 formula developed by Bill James gives us a team’s expected win percentage against their remaining schedule. I’m interested to see how this plays out.

First, the good news. Of the 11 playoff contenders in the American League, the Royals have one of the easiest schedules remaining. The bad news is that the other three AL Central teams also seem to have a less than demanding schedule ahead. 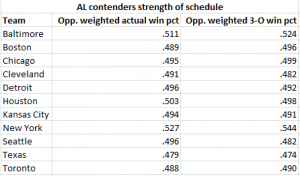 It appears to me that MLB has done a good job backloading the schedule with division games. I think that might be part of the reason the AL standings are so jammed up. The Royals play Cleveland nine more times, Chicago 10 times, Detroit 12 times, and Minnesota 13 times. The other teams have a similar mix of games against each other, too. That means there’s a lot to be determined still. I remain skeptical of the Royals’ ability to catch Cleveland, but at least they have plenty of chances against them (and six of the nine are in Kansas City; the Royals have looked like vintage 2005 Royals on the shores of Lake Erie).

The other bad news for the Royals is that the AL West teams have softer schedules, too. That’s pretty much because they play the Angels and A’s a lot, of course. Texas gets an even bigger break: they have 21 games combined against the bottom feeders in their division, plus four with Colorado, three with Milwaukee, six against Tampa Bay, and two against Cincinnati. Exactly half of their remaining 72 games are against teams with losing records. Houston has 22, and Seattle has just 16. I think you can pencil in the Rangers for a playoff spot, and they have a good shot at home-field advantage for the postseason. But those schedules might make it difficult for the Royals to make up ground in the wild-card race against Houston and Seattle.

On the other side of the league, the AL East is a meat grinder. Only one team in the division has a losing record, and that team (Tampa Bay) has a third-order win total eight games better than their actual total. The toughness of the division might help the Royals, as the four contenders there beat each other up. But Boston and Toronto overall really aren’t any worse off than Kansas City, and those two already have a 4.5-game advantage on the Royals.

So, given the strength of schedule the remaining teams face, what does the log5 projection say about the final standings?

Well, if you believe in this sort of thing, the news is not good for the Royals. Not only are they projected to finish with just 83 wins, Cleveland is projected to finish with 97. I’m sure part of this is that the third-order win formula doesn’t like the Royals that much. It is true that the Royals have been outscored on the year and really haven’t looked good for a lot of the season, but I do think they’re a little better than that. However, it looks like the two wild-card spots will come from the AL East in this formulation. It appears the race in that division will be terrific, but three of those teams will finish well ahead of the Royals. Here, see for yourself. 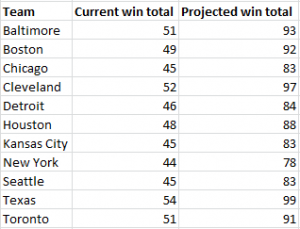 Now, remember, it’s just a projection. The Royals have spent the last two seasons making a mockery of those. I do think they’ll wind up with more than 83 wins; I just don’t know if it will be enough for another playoff berth. But that’s why they play the games, right?

1 comment on “Projecting The Royals’ (And Other Contenders’) Second Half”