This was shaping up to being one of those games. Anibal Sanchez has been one of worst pitchers in the American League this year. He entered the game with a 6.31 ERA. He allows over 10 hits per 9 innings. So naturally he was perfect through four innings. Of course he no-hit the Royals through six.

Thank goodness for the Tigers bullpen.

The man responsible for most of the damage on the night was one Eric Hosmer. Yes, that Eric Hosmer. The Royals first baseman, mired in the longest slump of his career, broke up the perfecto with a walk in the fourth. He denied Sanchez the no-hitter with a double in the seventh. And then in the ninth, broke the deadlock with a blast to right.

It’s the second game in a row with a home run for Hosmer. Is it possible he could be awakening from his extended summer slumber? For the Royals to have any shot at October, they need the thunder in the middle of the order to wake up. Hosmer looked miserable in the series opener and really struggled through the first five games of this trip. It’s way too early to suggest he’s breaking out of whatever ails his bat, but this is how hot streaks start.

And how about this:

Eric Hosmer (@royals): 4 career go-ahead HR in the 9th inning or later, all were eventual GW on the road against the rest of the AL Central

Speaking of getting something going, how about Alex Gordon? Like Hosmer, he goes deep for the second night in a row. If Gordon and Hosmer can start swinging the bat… Oh, my.

Tip of the cap to the Royals rotation. For the third consecutive night, they did the work with just one run allowed. That’s it. Being the Royals rotation that run is obligated to score via the home run. The latest strong outing was courtesy of Yordano Ventura. It was kind of the typical Ventura start in that you had the feeling the rails could come off at any moment. Yet, as we’ve seen of late, he hung in there.

Ventura brought the smoke – his fastball tickled triple digits – and countered that with a lively change-up and a knockout curve. He showed off-speed 45 times and generated nine swings and misses. For real, these were his moneymakers. Of those 45, Ventura delivered 31 of them for strikes, which works out to 69 percent. Nice. He needed about 15 pitches to navigate each inning, but managed to avoid the difficult frames that seemed to have plagued him in the past that would contribute to an inflated pitch count. The Tigers were able to put a pair of runners on in the third, fourth, and sixth innings, but Ventura was up to the task. It was a high-wire act for sure, but it was damn impressive.

Another starter going deep into games. Over the last 13 games, Royals starters have thrown an average of 6.2 innings per start. That’s some nifty pitching. Any wonder the Royals are 9-4 in that stretch?

Bully For The Bullpen

It seems for a bubble team to make a late run to October, you need a bullpen contribution from an unsung arm. That sure feels like Matt Strahm. The kid did it again. He threw 1.2 innings, coming in for Ventura in the seventh. He allowed just one hit and struck out one. It shows how quickly Ned Yost has thrown his faith behind his young lefty. I know we’ve been conditioned to not give a damn about the pitcher win, but it still means something to the players. Very cool for Strahm to pick up his first win of his career.

Strahm is just up there bringing the heat. 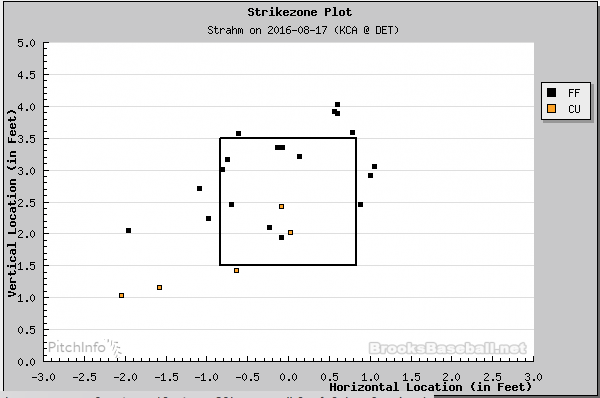 He’s working up in the zone with the fastball, but living in the mid 90s, he’s difficult to barrel. The sweeping curve is a nice offering to get right-handed hitters to go fishing out of the zone. It’s all working for Strahm.

The Royals return to The K for a brief four game homestand against the Minnesota Twins. This is an outstanding opportunity to gain some ground in the hunt for the Wild Card.