Lorenzo Cain has had a nice stretch of baseball recently. Entering Wednesday’s game, he had accumulated the following line over his previous nine games:

Of course he followed that up with an 0-4 night, but reaching base every other time you come to the plate is typically regarded as a good thing. The last week and half, and the whole month of August, seemed to be a big turnaround for Cain. It seemed like he was scuffling quite a bit before heading to the disabled list at the end of June, at which point he had a .751 OPS. His hot stretch seemed to get him back on the right track, and after last night’s game his season-long OPS sits at… .744. Huh.

To me, it’s felt like Cain has struggled significantly this season. And sure, he has had some poor weeks here and there, but overall, his numbers aren’t that far off of what some were expecting of him. In fact, he’s hit almost exactly as well as he did in 2014.

That’s a solid batting line for a center fielder with Gold Glove-caliber defense. Unfortunately, the rest of the league has not remained at that level.

One of these things is not like the others.

As you can see, Cain’s still getting his hits, and getting on-base more often than a league-average batter, but he’s not racking up as many extra bases, relative to the league. Once you account for the rising tide of offense, Cain’s adjusted OPS looks quite a bit different. In 2014, his OPS+ was 109. This year, he’s at 96. The spike in league-wide slugging has caused Cain’s production to look worse than it does on the surface.

Regarding that slugging percentage, Cain had the best season of his career last year, with an isolated slugging percentage of .170. Even if you assume that’s above his true talent level, it would seem that any power surge across the league should also be reflected in Cain’s line. Some regression could be expected, but falling back to his previous level (currently a .117 ISO), when accounting for the increase in offense, is unexpected.

Now that we know Cain’s slugging is lacking, we can try to figure out why that is the case. My first guess was that Cain’s batted ball distribution is vastly different from last year’s. It’s seemed like he’s been hitting far more ground balls, and not elevating the ball enough. Well, see the thing about that, is that eyeballs and memories can deceive you.

He is hitting fewer fly balls, but that doesn’t seem like it would cause a 50-point difference in ISO. Using Statcast data, his average launch angle this year is less than half a degree lower than his average launch angle last year. There’s not enough there to explain the plummeting power. Plus, he’s elevating the ball more than he did in 2014, but getting the same results.

Cain’s also hitting the ball to different fields as well as he did last season, so that doesn’t really explain it, either. At the same time, his exit velocity to his pull side is slightly lower this year than it was last year, but it’s a difference of less than one. Yet another small change that, on its own, doesn’t tell the whole story.

There is one stark change that we can dig into, however. Cain absolutely demolished fastballs last year, particularly those of the four-seam variety, as he hit .354 with a .603 slugging percentage against them, including seven dingers. This year, he’s still getting hits, with a .336 average, but his slugging percentage is just .453, hitting two dingers against the fastball.

His exit velocity suggests he’s simply hitting fastballs with less authority this year, while also hitting them at a lower launch angle. In looking through some video, nothing immediately jumps out at me, but I did notice one thing that could be contributing to the weaker contact against four-seamers. I’ll once again stress that I’m not a hitting coach, but here are a couple of videos anyway. The first is from 2015. Cain saw a fastball on the inner half, and was able to drive it in the air, collecting an RBI with a sacrifice fly.

This video is from 2016. Cain saw a fastball on the inner half, but didn’t put a great swing on it, and just blooped it the other way.

The run still counts the same, of course.

Now, here are a pair of screenshots from those videos, each at the highest point of Cain’s leg kick. 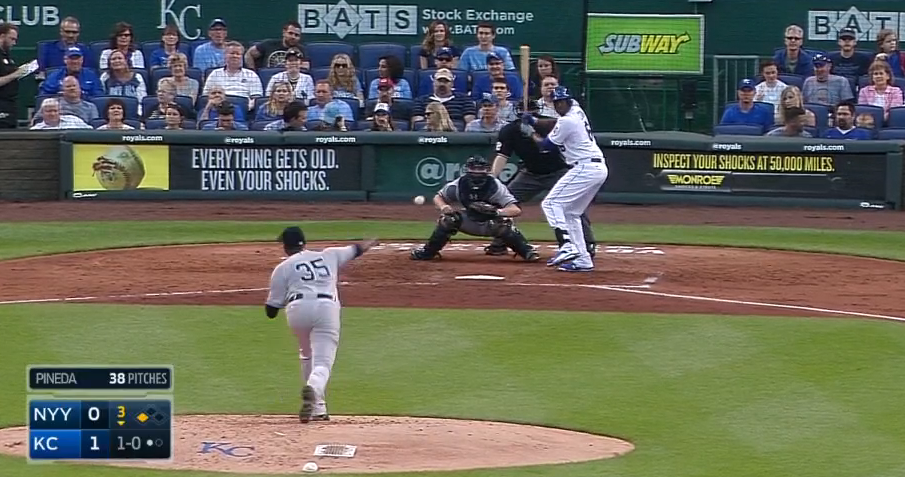 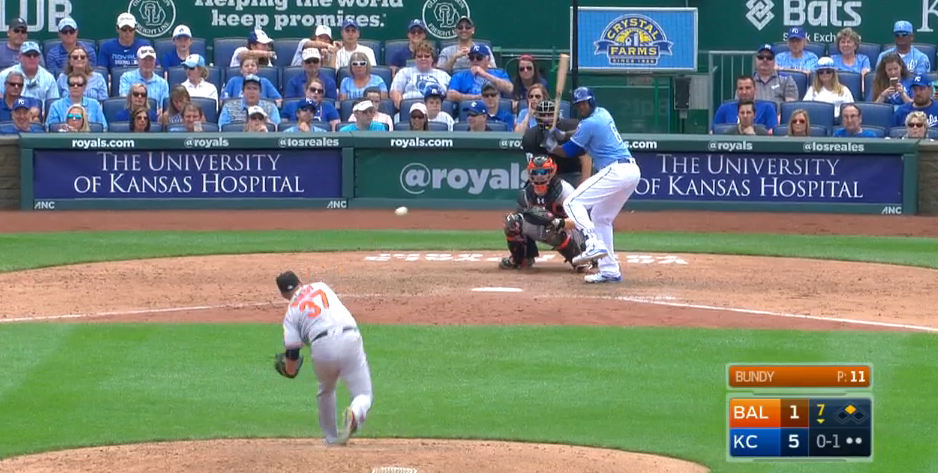 It’s not as if Cain used a toe tap last year, but his leg kick was less pronounced than it has been this season. I don’t know the reason for the additional movement, and I’m certainly not suggesting all leg kicks are bad. Many players have become much better hitters after incorporating that specific timing mechanism.

For Cain, though, it’s possible that the extra movement has thrown off his timing. By not getting his foot back down, his hands may be slower in getting the bat through the zone, which can lead to weaker contact, or no contact at all. His whiff-per-swing rate on four-seamers is up eight percentage points from where it was last season.

This issue hasn’t been reflected in his overall contact quality numbers because it seems to be mostly an issue on fastballs up in the zone. Cain’s still hitting the ball well enough overall, and he can still be an effective hitter without the power he showed in 2015. The power would help, but a league-average hitter with his defense is still a valuable player.

It hasn’t seemed like Cain has had a great year, and there are certain parts of his game that have slightly regressed from last year, although some of the perceived regression is due to the offensive surge around the league, with which Cain hasn’t kept up. And what could be driving that is an issue with his timing, potentially due to a slight mechanical adjustment. All of those minor changes have caused his numbers to take quite a dive, compared to the rest of the league.

Getting back to a lower leg kick isn’t a guarantee of more dingers, and because he’s still hitting well enough, he may not want to make any tweaks. If he does feel like there’s more potential to be untapped, however, he might be able to make that small adjustment and return to the level of performance that made him an MVP candidate last season.