That was some kind of weekend.

Tasked with traveling to Fenway Park, the Royals stood toe to toe with the best offense in the American League. The Royals bolted out of Boston in their best position for a playoff spot since they officially announced their postseason candidacy earlier this month. 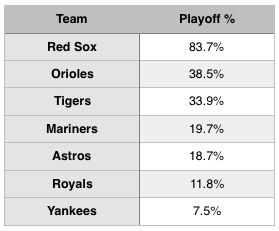 The Royals are decidedly in the mix. They were there before the just-completed crucial road trip and they have, somewhat unbelievably, improved their position. In taking two of three from the Red Sox, the Royals outscored their opponents 19 to 15, punctuated by an eight run, sixth inning outburst on Sunday. In fact, this is the first time I can remember this season where they are over 10 percent to the good in their playoff odds.

Boston, if you recall, is where this current version of the Royals, became THE ROYALS. It was the first series of the second half of 2014 and Kansas City was swept away in three ugly games that included a limp offense, a poor starting pitching performance in the series’ last game, and some bizarre managerial decisions. You remember. Although times have certainly changed, it’s difficult to get past that team, that offense, and that park. That 11.8 percent? The Royals earned that.

I’ve been running through the permutations of the playoff race in my mind over the last couple of days. You have three teams from the AL East, two from the Central, and two from the West. There’s been a lot of talk about how strong the East is, but that feels overblown. It’s definitely the best division, with only Tampa acting as a doormat, but it’s not strong. Strong is the 2015 NL Central, with three teams at 97 wins or better. That’s not happening in this year’s AL East.

However, the Blue Jays, Red Sox, Orioles, and Yankees are all in the race, with Toronto leading the division and the Sox and O’s currently setting the pace for the Wild Card. With four clubs in the mix they are all going to play each other down the stretch. ESPN put up a graphic on Sunday Night Baseball that showed the three non-Toronto teams will play each other 13 times from now to the end of the season. It’s easy to see a stalemate brewing among the three.

Of those three, the Yankees have the most difficult schedule ahead. They travel to Kansas City this week for three games. Then 23 of their remaining 30 games come against teams that already have 70 or more wins. That’s a brutal trip through the AL East and includes a three game set against the Dodgers. The Bombers have struggled against their Eastern Division counterparts this summer. They are hanging in the race because they’ve gone 39-24 against teams from the AL Central and AL West. Once they leave Kansas City after Wednesday, that part of their schedule is over. They were sellers at the deadline and brought an injection of youth that has started well, but can they keep the pace?

If a team is going to come out of the West, it could be the Mariners. Of their remaining schedule, they have 16 games left against the Angels, A’s, and Twins. That’s soft. That’s why they hold a slight statistical advantage over the Astros. Houston drew the short straw from the schedule overlords. After this week’s three game set against the A’s they travel to Texas and Cleveland before returning home to host the Cubs and the Rangers. That’s a brutal 13 game stretch that won’t catapult them to the head of the Wild Card pack, but it could send them to the back.

Therein lies the difficulty in handicapping this race. It’s so difficult to make up ground with so many teams clustered together. A stretch of six or seven wins out of 10 isn’t going to be enough. However, if you start losing, you’re going to get dropped by the wayside.

Speaking of which, we have the Orioles. They have stumbled, but have done just enough to stay at the front of the pack. They have to feel the pressure, though, as the field has pulled closer.

The dark horse team in all of this is Detroit. They have 18 games remaining with the White Sox and Twins. Then, they finish the season with three against the Braves. Seriously, schedule maker? But Detroit plays under .500 baseball within the division.

I’ve seen plenty of discussion about the Royals controlling their own destiny and I’m not so sure about that. There are simply too many teams to climb over in the standings the Royals don’t play down the stretch. This means they have to be dependent upon others to do some dirty work for them. This is where it gets increasingly difficult. With time running down, it’s not enough for the Royals to continue to win at something ridiculous like a .600 pace, they need at least five other teams to falter. It can be done. We’ve seen it happen, and who in their right mind would bet against the Royals?

The Royals have 20 games left with the Twins, White Sox, and A’s. They don’t have the easiest road ahead, nor is it the most difficult. We’ve seen this team rise from the mat time and time again. It would be foolish to bet against them.

What we have is meaningful September baseball. Who would have thought that was a possibility after July? This is getting interesting.