One affiliate advanced in the playoffs while another qualified for the postseason during a 2-4 day that saw three team’s seasons come to an end. 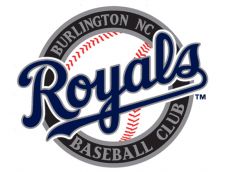 A dramatic late comeback advanced the Royals in the deciding Game Three of their division semifinal. With the league’s top pitcher on the mound for the Royals, it was surprising that they found themselves behind 2-0 after a two-run home run by Deion Tansel of the Rays. The Royals’ starter would settle down, allowing his team to tie the game in the fourth on RBI singles by Vance Vizcaino and Nicky Lopez. The game would stay knotted at 2-2 until the seventh when reliever Alex Massey gave up three consecutive singles to open the inning, pushing Princeton ahead 3-2. The Tulane righty stabilized things to get the final three hitters in the inning and keep the deficit at just one run. Another Rays threat in the eighth put the game on the brink versus reliever Walker Sheller with a runner on second with just one out, but once again the Royals would escape any damage with a strikeout and a groundout.

That would allow Burlington to tie the game in their half of the inning without a hit, getting a hit by pitch of Kort Peterson, an error on a double play throw that pushed Chris DeVito to second base after Peterson had been forced out and another error that allowed pinch runner Tyler Straub to head to third base with just one out. That error was cashed in when Vizcaino brought home Straub to tie the game at 3-3 with a sacrifice fly to left field. That tie was nearly unknotted after a Nathan Esposito single to center, but Rays centerfielder Emilio Gustave gunned down Royals Emmanuel Rivera at the plate to send the game to the ninth inning still tied. After a perfect top half of the ninth by Sheller the Royals would quickly walk things off in their half, getting a double by Jonathan McCray to open the inning and setup a run-scoring single by Nicky Lopez to bring him home after stumbling around third and then daring to come home as Lopez got caught up between first and second. The win sends Burlington to the championship series for the first time since 2012, a team that featured Bubba Starling and Terrance Gore. Hear the walkoff call here. 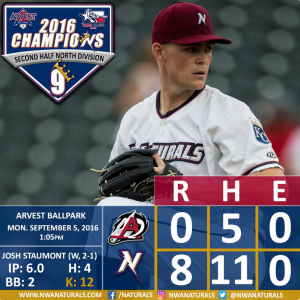 The Naturals were motivated and ready from the jump in this one, getting out to an early lead and cruising from there. Leadoff batter Corey Toups started the Naturals first with a hit by pitch and moved to second on an Alfredo Escalera bunt sacrifice as NW Arkansas played for an early score. After a single by Mauricio Ramos moved Toups to third base, first baseman Ryan O’Hearn singled Toups in to give NW Arkansas a 1-0 lead. The Naturals quickly upped that lead when Frank Schwindel doubled in Ramos and O’Hearn to push the lead to 3-0 before Schwindel got tossed out at third. The second inning started with a Humberto Arteaga triple and a Logan Moon sac fly to push the lead to four. With Josh Staumont tossing beebees, the offense put up four more runs on the board in the fourth to put the game well in hand. The big knocks in that inning came from Ramos and O’Hearn, with each plating a pair of runs with doubles. That was more than enough scoring as Staumont controlled the strikezone throughout, walking just two while allowing four hits and matching his career high with 12 whiffs. The righty turned things over to the pen who finished off the final three innings scoreless to earn a bid to the Texas League playoffs. The Naturals will start their best of 5 series with Springfield on Wednesday, with the first two games on the road before playing the possible final three at home.

The Chasers lost an offensive duel to finish their season 58-82. The two teams combined for 31 hits, including 11 that went for extra bases, but it was Oklahoma City’s four home runs that was the difference. The Dodgers uber prospect, Cody Bellinger, hit his third home run in two games while driving in a pair, but it was Brandon Hicks hitting two home runs and driving in four that did the most damage. The Dodgers rocked Jake Junis, scoring seven runs in five innings as part of their 10 run onslaught while the Chasers scored in six of nine inning with a pair of the ninth to come up two runs short in the loss. The record is the worst for the Omaha based franchise since going 53-91 during the 2006 season.

Lefty Matt Tenuta was touched up for six runs in six innings, giving up a pair of home runs in the season-ending loss for Wilmington. The Rocks starter surrendered a three-run dinger in the second inning to put Wilmington behind 3-1 before allowing a pair of doubles in the third to plate another. The final blow came immediately after the doubles, a two-run home run to push the Frederick lead to 6-1. The lefty would find a groove too late, retiring the next eight hitters in a row, before finishing the sixth inning scoreless and turning things to the bullpen. His battery mate, Luis Villegas, would homer twice, once in the second and another in the eighth, but it would be too little for the Rocks as they finished their season 54-84. The record for the Rocks is the worst they have had since regaining a franchise in 1993.

The Legends couldn’t cash in runs during their final game of the season, falling by a run to finish  52-87. The Legends scored just two runs, missing a couple opportunities to push home D.J. Burt after he had stolen second base in the first and eighth innings. Those missed chances cost them in the loss after starter Gerson Garabito gave up three runs (2 ER) in six innings on four hits and a walk, one of those four being a two-run home run in the third inning. The loss pushed Garabito’s record to 2-11 on the season with a final ERA of 4.80 this season. The Lexington franchise hasn’t had a winning season since 2010.

The league’s worst bullpen continued their status quo on Sunday night, blowing leads in the eighth, ninth, and finally, the tenth inning. The Chukars offense attacked throughout the game, building a 5-1 lead with a four-run fifth frame. After adding to their lead at 6-3 in the top of the seventh, the bullpen started their woeful ways. Reliever Cole Way giving up a pair of runs in the seventh to trim the margin to 6-5. The tall lefty one inning later would load the bases before turning things to Richard Lovelady who would promptly walk in the tying run before ending the inning. This would turn into a pattern as Idaho Falls would build leads in the ninth and tenth with Lovelady losing the lead in the ninth and reliever Nic Andros blowing it in the tenth. The bullpen added to their league-leading 16th blown save coming into the game for the Chukars loss and the end of their season, having been eliminated from the playoff race officially with the loss.