It was a homestand not so much of lost opportunity, rather it was an example of exactly how difficult it is to make a move in a race you are chasing six teams.

Two heartbreaking losses against Detroit followed a pair of extra inning defeats to the hands of the Yankees. Both are bunched in the peloton of teams along with the Royals, chasing the leaders for Wild Card number two. Yes, the losses were brutal. And absolutely, the losses hurt. The catch is, even if the Royals had stolen a couple of wins instead of having defeat snatched from the jaws of victory, they’d still be looking at the same uphill climb with time running short.

Certainly, wins are preferable. Wins help the cause. But when you’ve buried yourself with a retched July, not even a scorching August can always pull you from the depths.

As it stands, the Royals lost nine percent of their playoff odds over the last week and dropped to just 2.8 percent likelihood of October baseball.

The Royals took care of business on Monday, clobbering the Twins, yet they barely moved the needle in their chase for the Wild Card. That’s because all the teams in the hunt, (that would be New York, Houston, Baltimore, Detroit, and even Seattle) all won. There are seven teams bunched between 76 and 70 wins. As things currently stand, 76 wins for the Red Sox sets the pace and earns the first Wild Card. 75 wins is good for a tie for the second Wild Card between Baltimore and Detroit. Of those seven, only Boston suffered defeat on Monday. That pulls the entire pack a game closer, but that’s kind of the point. Teams find it difficult to distinguish themselves.

This is exactly what Bud Selig and his cronies hoped for by adding the second Wild Card. For the record, I’m in favor of having two. If you’re going to have one, why not two? The more the merrier. In this case, it’s a good idea because it creates the play-in game. The drama, as we know, can be outstanding. Yet for me, the ideal is that it doesn’t give a team that failed to win their division a free pass into the postseason. Make them sweat a little.

A byproduct of this, is the heightened potential for a train wreck in the standings. With seven teams vying for just two spots, there is a better than average chance that there will be a tie. Or maybe two. Or maybe a three-way. The most brilliant thing that could happen would be four. Or more. When it comes to the Wild Card, I root for Team Chaos.

None of this does our Royals any favors. Although the Royals don’t seem too concerned about doing any favors for themselves.

The Royals have won 19 of their last 30, a stretch of outstanding baseball that is second only to the Texas Rangers who have been victorious in 20 of their last 30. That should be a good thing. The Rangers aren’t in the division and, with the best record in the AL, they aren’t in the mix for the Wild Card. But here are the records for the previously noted teams in the hunt over the last 30 games:

Here’s how the Wild Card standings looked before the Royals 30 games ago. 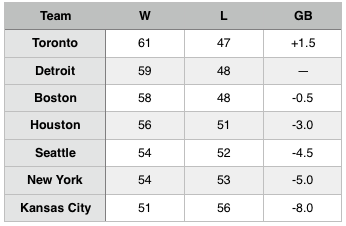 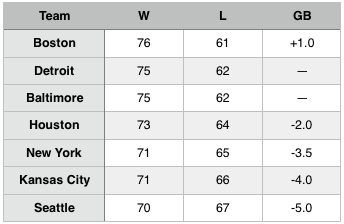 All of the above teams, except for Baltimore who has fallen out of the lead in the AL East, have played some solid baseball. The Royals, as a result of their last 30 games being better than anyone in the conversation for the Wild Card, have pulled themselves to relevance, yet have only moved one spot up the ladder.

Then, something strange happened. Over the last 10 games dating back to August 26, the Royals own a 5-5 record.

Yes, the Royals caught a couple of bad breaks over the weekend in winning only one of three against the division rival Tigers. Yes, they gave away a couple against the Yankees. Comb through the game logs and you could probably find a handful of games were the Royals were on the right side of the luck, stealing a win or two. Or several.

The simple columns listing the runs scored and runs allowed would appear to support the theory the Royals have had more good breaks than bad. For the season they’ve scored 563 runs and allowed 573. A minus-10 run differential suggests they should have lost more games than they have in the victory column. Yet this team is five games to the good side of .500 and remains in the mix for a Wild Card spot.

The adjusted standings are largely unchanged percentage-wise from the last time we checked. It’s a cold splash of water in the face, but the numbers present a cold and fast reality that the Royals aren’t good enough to advance beyond the regular season.

Certainly, though, there’s hope. Hope is what fuels you as a fan. When the Royals were down 7-3 in the sixth inning of the 2014 Wild Card game, you hoped they could chip away at the lead. When they were down 6-2 in the eighth inning of an ALDS elimination game, you hoped they could stage a rally. When Alex Gordon stepped to the plate in the ninth inning of the opening game of the 2015 World Series, you hoped he would do something positive. The Royals have been on some kind of ridiculous run the last two years, but the common thread was they always positioned themselves to be in the mix. Despite the odds being against them at any particular moment, they didn’t particularly care because they were in the game, dammit. They gave themselves hope.

As long as the Royals are mathematically alive and within shouting distance of the leaders, it would be foolish to count them out of the Wild Card. Especially given what we’ve seen and experienced the last two years. But the Royals are currently the sixth best team in a seven team race. The numbers say that while there is still a chance, they aren’t good enough to plunk down your hard-earned cash to back them to play in the postseason. Of course, they are in a similar mathematical position now to advance as they were in Houston in the eighth inning of that Game Four of the ALDS.

Hope? It’s still there. The difference now, instead of battling one team, they need to leapfrog several. It’s so much easier to defeat one opponent instead of four.

This is not a eulogy. For the Royals? While they still have hope? That would be short-sighted. This is simply a preparation for last rites. Again.