The Royals hit the road for the second time this season, traveling south to Texas to take on a Rangers team that hasn’t followed up their 2016 AL West title with the start they hoped for. But it’s still early and there’s still a good deal of talent on this club. They do seem to be missing Adrian Beltre, who will be out a little while longer with a calf injury. They’re near the top of the league in runs scored, but they still have a bit of a struggling offense. It’s just that when they do hit, they really hit. A struggling bullpen has done them no favors either.  It’s honestly hard to say if either of these teams should be better than they’ve been, but you can make a case for both. 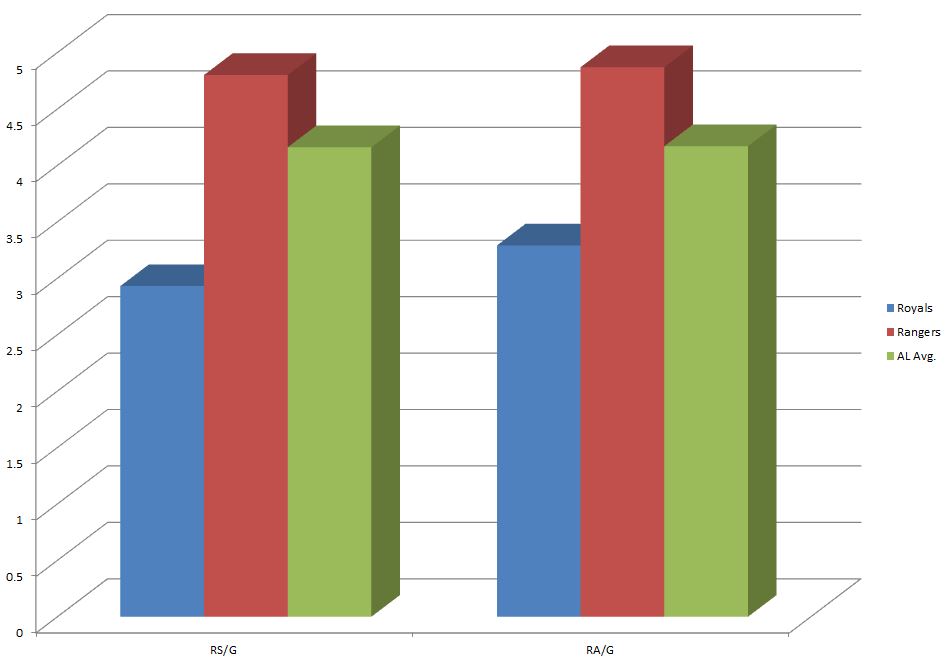 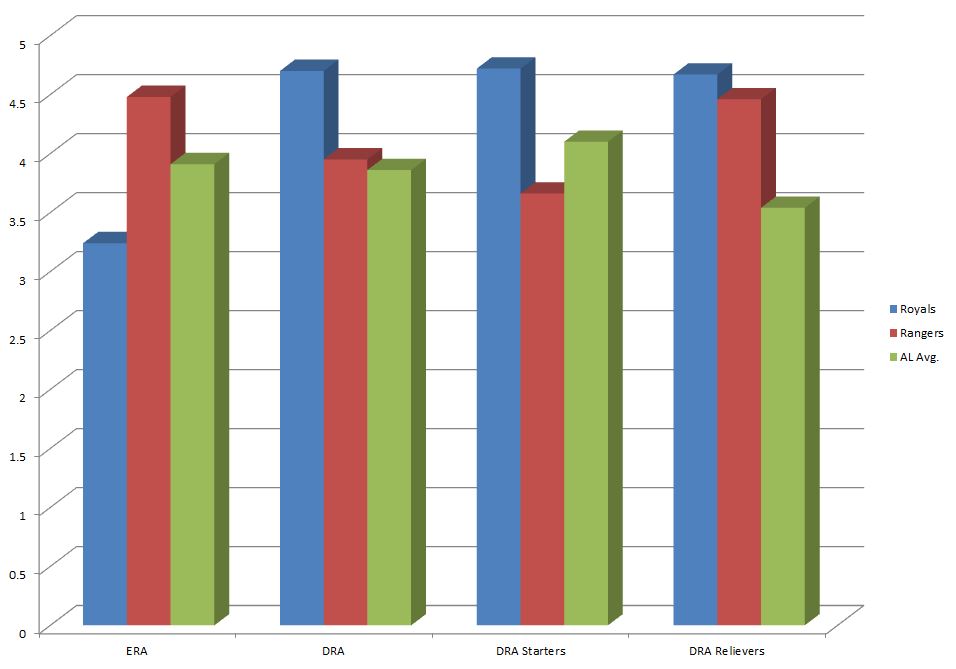 Cashner is a head scratcher. He has the stuff to be great. Between 2013 and 2014, he posted a 2.87 ERA with solid peripherals. But something was always missing. Even with a 96 MPH fastball and very good slider, he just didn’t get the strikeouts you’d expect. Now, he’s armed with a 91-93 MPH fastball/sinker combination and a changeup that does look good at times. He posted a 4.72 ERA between 2015 and 2016 and in his first start of 2017, walked three and struck out only two in 5.1 innings. So the Royals should theoretically be able to hit him. Of course, they should have been able to hit Matt Cain too, and we saw how that turned out. Cashner is better against righties, but still not good, so that gives the Royals left-handed power an opportunity to maybe get right. If the Royals are going to get him, it’ll be early as he struggles to start games but the games he lasts in, he finishes strong with a .695 OPS allowed the third time through the order last season.

Duffy has started the season with affirming the Royals faith in him as their number one starter. He’s given up no more than two runs in any of his first three starts and he’s gone six plus innings in all three. He was also outstanding against the Angels in his last start after a first inning hiccup. It bears watching, though, that he only elicited nine swinging strikes after getting 33 in his first two starts. The Rangers do make a lot of contact, so it could very well be a blip on the radar but his velocity sitting around 93 MPH instead of 95 MPH makes that a trend to keep in the back of the mind. Still, Duffy is looking very good early.

Since coming to the Rangers at the 2015 trade deadline, Hamels has been very good, though maybe not quite as good as the Rangers had expected. Still, he’s giving quality innings and has provided a second top of the rotation arm to their staff. This year, he hasn’t recorded a decision and his strikeout rate is down. His velocity is down as well, with his fastball and sinker averaging between 91 and 92 MPH instead of 93-94 like it did last season. He still has that great changeup, good curve and solid cutter, but the velocity being down is something to worry about if it continues as the weather heats up. He’s still a very good pitcher and he’s held lefties to just one hit in 10 at bats this season, but his splits as he gets through an order don’t look pretty. He’s allowed a 1.088 OPS the third time through and a .918 OPS on pitches 51-75. That’s not a good sign for an ace.

Karns has had an odd start to the season. I thought he’d be a guy to get a lot of swings and misses and strikeouts based on his history. In his two starts, he’s struck out six in 11.2 innings, but he’s gotten the job done, allowing just two runs. He’s thrown 86 pitches and 85 pitches, which might be around where his ceiling hits given his struggles as he works through an order, but that’s okay from the back of the rotation. It would be great if he could up that in the near future, but for now, it’ll do. One thing that’s been noteworthy is that he’s used his changeup a lot this season and the Rangers have struggled with changeups this year. This might be a good matchup for him.

Griffin is not an overpowering pitcher, working a fastball in the upper-80s to the very low 90s. He also mixes in a changeup, curve and cutter. So far this season, the fastball has been good until it hasn’t with a .250 average against it but two homers and a double allowed for a .600 slugging percentage. Maybe this is only interesting to me, but he’s only had two cutters put in play and one was hit out of the yard. After two full years away, Griffin came back last season for the Rangers and has his moments, but was ultimately uneven and posted a 5.07 ERA with more than two home runs per nine innings. That’s not very good. In his first three starts this year, he’s continued to struggle with the home run ball but has been been able to get by with minimal damage due to only nine hits and four walks allowed in his 15.1 innings pitched. He’s a two times through the order pitcher at this point, so if the Royals get to a third time with him, it won’t be long before the bullpen comes out. He rarely exceeds 100 pitches, so working the count early is a good strategy. Even if they don’t put runs up, they can get him out of there.

Kennedy had his best start of the season in his last start against the Angels, striking out 10 over eight scoreless innings. Unfortunately, he didn’t get the win but he was outstanding. The Rangers are one of just four teams Kennedy has never notched a win against, so it would be nice for those purposes if he could get one here. He’s gotten progressively better with his command each time out last season and has gotten double digit whiffs in all three of his starts, which is a good place to be. He threw 111 pitches in his last outing, but he will have an extra day off since that start, so I don’t anticipate any impact from that workload so early in the season. Plus, it’s 111 pitches over eight innings, which makes it a little easier to handle.

Yu Darvish is good. He throws a lot of good pitches. Only one of the seven different types of pitches he’s thrown this year has been hit hard and that’s his sinker. Of course, there’s only seven at bats of sample on that. His top three pitches that hitters should focus on are a 94-96 MPH fastball, a slider that can be devastating and a cutter that seems to me to be getting better every season. He’s a little bit less predictable against lefties, throwing all his pitches at various times, but right-handed hitters can expect a lot of fastballs. When he’s on, he’s one of those guys who has no-hitter potential. He’s allowed 0 hits in 17 at bats with runners in scoring position, which is a situation the Royals have really struggled in this year. That’s an incredible number, even at that small of a sample. The one saving grace with Darvish is that the Rangers are careful with him. He only pitched past the sixth inning in seven of his 17 starts last season. Some of that was returning from injury, so they likely won’t be that tight this year, but he’s still a valuable asset that they want to protect this early in the season.

Hammel, like Kennedy, is coming off his best start of the year but it also didn’t result in a win. He was in command of the game against the Giants, taking a perfect game to the fifth, before faltering a bit and ultimately leaving runners on base for the bullpen to clean up. He ended up giving up just the one run over six innings, which was a nice follow up to a bad start against the A’s. The worry is the whiffs just aren’t there for him, so he’s the biggest concern of mine in the rotation to this point in the season, but if a guy like him is the biggest worry, the rotation is probably doing alright.

The Royals took care of business in Houston in their first trip to Texas and are playing better now than they were then, but this series has me worried. For one, I fear for Hamels and Darvish absolutely carving up this lineup and I’m not so sure that Cashner and Griffin aren’t going to dominate too, as we’ve seen this lineup go quiet against bad pitching as well as good. I think they find a way to split, but it wouldn’t be too terribly surprising if they lose three of four. I just don’t like the way the offense is going right now and I think there’ll be some correction with the starting pitching in this series as well.