With the losing streak up to nine games, the Royals have to get something going and quickly. They’ll get their shot against one of the teams that is responsible for one-third of the losses in this stretch, the Chicago White Sox. The three wins against the Royals were part of a six-game winning streak that was snapped in their series finale against the Tigers on Sunday. This is a team with a struggling offense that was awakened in the past week, but this is still not an especially good team. I guess that makes it tougher to swallow that they absolutely dominated the Royals last week, but it’s still true. 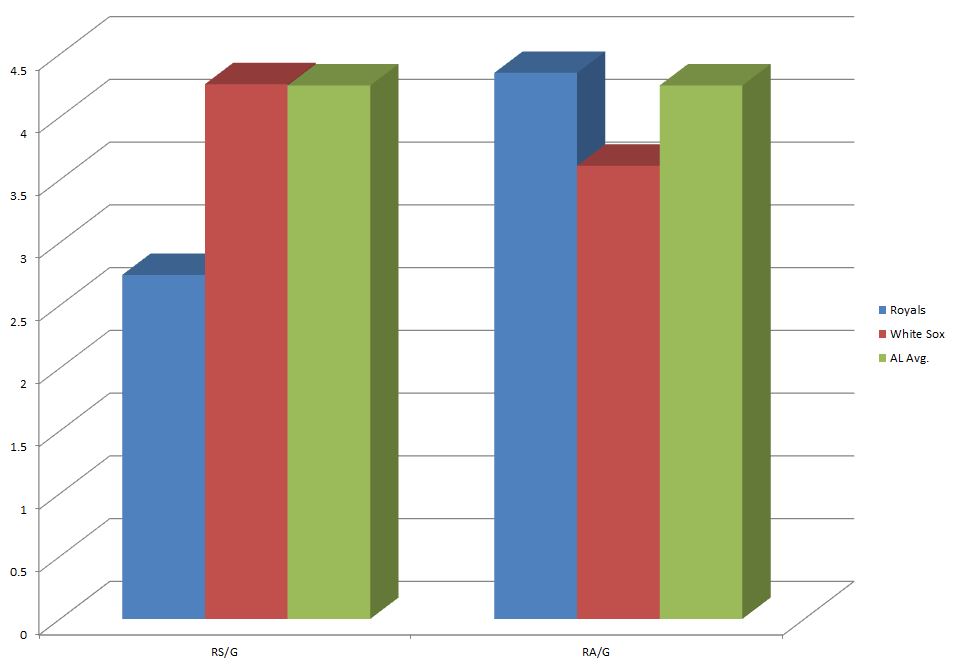 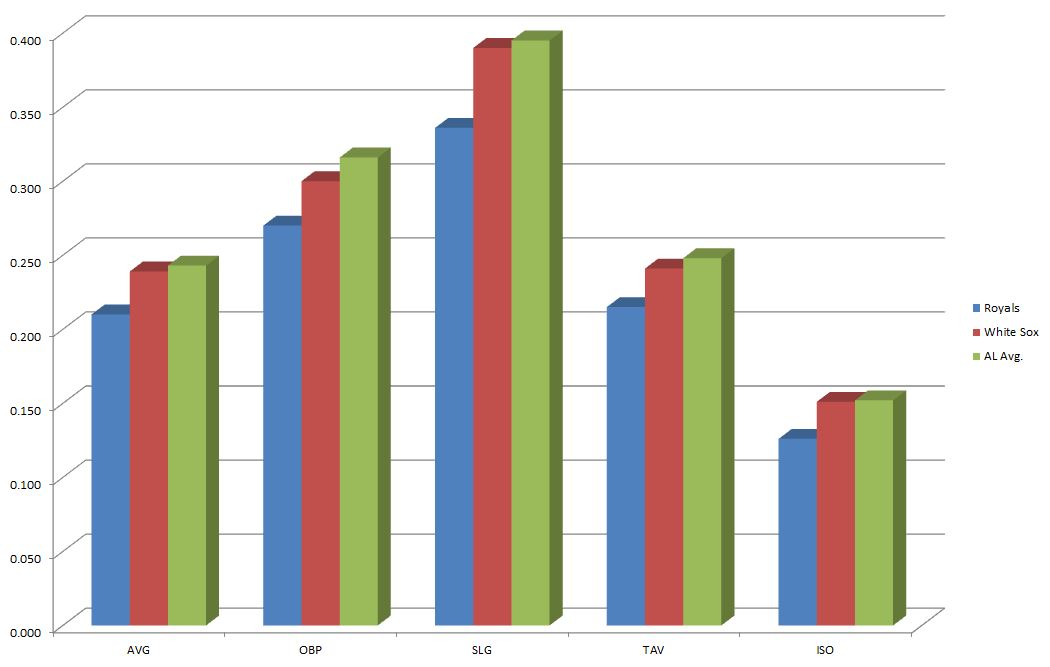 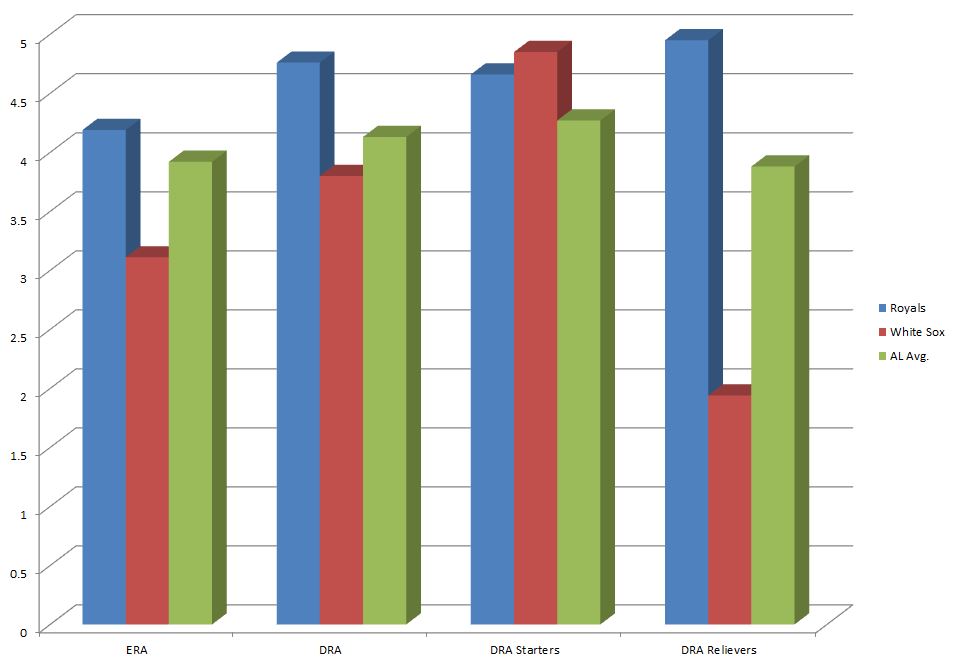 Covey made his third career start last week against Kansas City, and in going four innings and giving up two runs with four strikeouts, it was the second best start of his career. He doesn’t have especially good stuff, though, so there’s really no reason any team shouldn’t be able to hit him. That the Royals couldn’t get to him for more was more of an indication of their ineptitude than his development and success. He throws a lot of sinkers and a few four seam fastballs, both at about 92-93 MPH. He has a changeup, curve and a cutter to round out his repertoire. They’ve all been hit hard, but the sinker has been the best with a .217 average against it, albeit with a .478 slugging percentage. Without especially good stuff, it’s not daunting to fall behind in the count against him. It’s a tiny sample, but he’s allowed a .417/.417/.583 line when he’s ahead in the count. That includes a .360 average allowed and .724 slugging percentage in 25 plate appearances with two strikes on the hitter.

Vargas is coming off his worst start of the season, which caused his ERA to balloon to an unsightly 1.40. Even with the struggles, he still was able to pick up 17 swings and misses, which was the most he’d gotten all season long. In a bigger park with an offense that’s hopefully starting to come down a little bit, I think he’ll have a much more successful start in this time around against the White Sox. Vargas has faced 58 batters since he last issued a walk. That’s pretty impressive.

Quintana is good. The numbers this year don’t show that, but he is. He pitched pretty well against the Royals in the series finale last week, giving up just one earned run with 10 strikeouts in six innings. The pitch count got a little raised, but he was fantastic. He got 15 swinging strikes, which is six more than he’d had in any game previously. He throws a fastball and a sinker. This is a quirk that may only interest me, but both are averaging exactly 92.82 MPH. He also has a very good curve and a changeup he uses sporadically. He had nine whiffs on the curve on Wednesday if you want to know the pitch to watch out for in this one. Opponents have just two hits on the first pitch against Quintana, but he’s only elicited six swings and misses. The guy throws a fair amount of first pitch strikes, so I wonder if maybe jumping on that pitch isn’t a decent idea. It’s worth a try. It may cause him to get deeper into the game, but it may also cause him to not get to use his curve as much.

Duffy also had his worst start in the last series against the White Sox. I think some of it was his own doing and some of it was due to a rough balk call early in the game. He said it caused him to move away from his slide step, which is a nice weapon. I think there was some emotion involved as I’ve never seen him that heated on the field before. Either way, this is a good opportunity to make up for it. This is true for both Vargas and Duffy, but the White Sox haven’t hit changeups well, so if they both have it working, it could be a long day for them.

As Mike Pelfrey continues his tour of the AL Central, he now pitches for the White Sox after being let go by the Tigers. He’s made two starts for them and they’ve been pretty predictable. He’s given up seven runs (five earned) while giving up 10 hits, walking five and striking out three in nine innings. He’s always been heavy with the sinker and he’s thrown it about half the time this season at an average velocity of 93-94. His splitter, curve and slider complement the sinker, but the split is the only pitch to really fear at all as it’s been the only pitch to not get hit pretty hard this season and he “only” allowed a .260 average and .411 slugging percentage on it last year. While Pelfrey is even easier to hit when ahead in the count, he just doesn’t have much anymore, so if a hitter falls behind, they’re not in that much trouble then either. Last season, he allowed a 1.016 OPS the third time through the order, so that’s something to watch out for. Of course, he also allowed an OPS of .894 and a .777 OPS the first and second time through respectively. Basically it comes down to this. If the Royals aren’t going to hit Pelfrey, there’s a decent chance they just aren’t going to hit. They absolutely destroyed him last year with a .405/.521/.649 average against him in three games, so this is a pretty big test right here.

Karns was so close to having a really good start against the White Sox last week before giving up a home run in his last inning to give the White Sox the lead and the Royals ultimately their seventh straight loss. In spite of the late homer, I thought he looked about as good as he’s looked this season. He struck out five and didn’t walk anyone and got 11 swinging strikes, his second straight start in double digits. I feel like if he pitches in this one like he did in Chicago that he’ll have a better fate.

Holland was a risk the White Sox took this season to take the place of Chris Sale in their rotation. So far, it’s been a nice risk as you can see from his numbers above. His ERA is a little bit misleading as he allowed five unearned runs to the Yankees in his third start of the season. Still, he’s really gotten the job done through five starts, but his season high in innings pitched is just 6.1. Holland’s velocity isn’t what it once was. He averages 92-93 on his fastball and his sinker. He adds in a curve, slider and changeup. The changeup and slider have been good with the slider his best strikeout pitch. Opposing managers have stacked lineups against him. He only has 11 plate appearances against left-handed bats this season and he’s allowed just one hit in those plate appearances. Like Shields, he’s been rough with the bases empty (.275/.373/.490) and has allowed an OPS under .500 with men on base. I also believe he can be beaten later in games as he’s allowed a .240/.345/.480 line on pitch 76-100.

Kennedy has been really good since his first start of the year, but may have cost himself a chance at his first win by letting his pitch count get elevated. Of course, there’s no way to know, but maybe the game unfolds differently if he can get through more than 5.1 on 100 pitches. Even so, he’s deserved a much better fate than an 0-2 record for his great work to start this season. This hasn’t been talked about much, but he’s allowed just 17 hits in 31.1 innings this season. With 14 walks issued, he actually has a WHIP under 1.00 through his first five starts. It all may implode at some point, but he’s been worth every penny of his contract so far.

I don’t think this losing streak hits 13 games and the Royals have their three best pitchers going in this series. At this point, projecting wins is difficult to do, but I think they end up splitting this series with some good pitching and making up none of the ground they need to make up. But hey, that would mean a win against a division opponent, which would be their first of the year.