The last time the Royals hit the road, they returned home with the same win total they left with. Now they head to Tampa Bay to take on the Rays, who have hovered around and even at .500, but haven’t been able to get over the hump. The Rays have some pop and will work a walk but they strike out quite a bit. I’m not entirely sure they’re a good team, but they’re also a team that can do some damage against a team like the Royals who are struggling so badly. Steven Souza, Corey Dickerson and Tim Beckham have been the players driving the bus, which is kind of scary because Evan Longoria hasn’t gotten going yet. 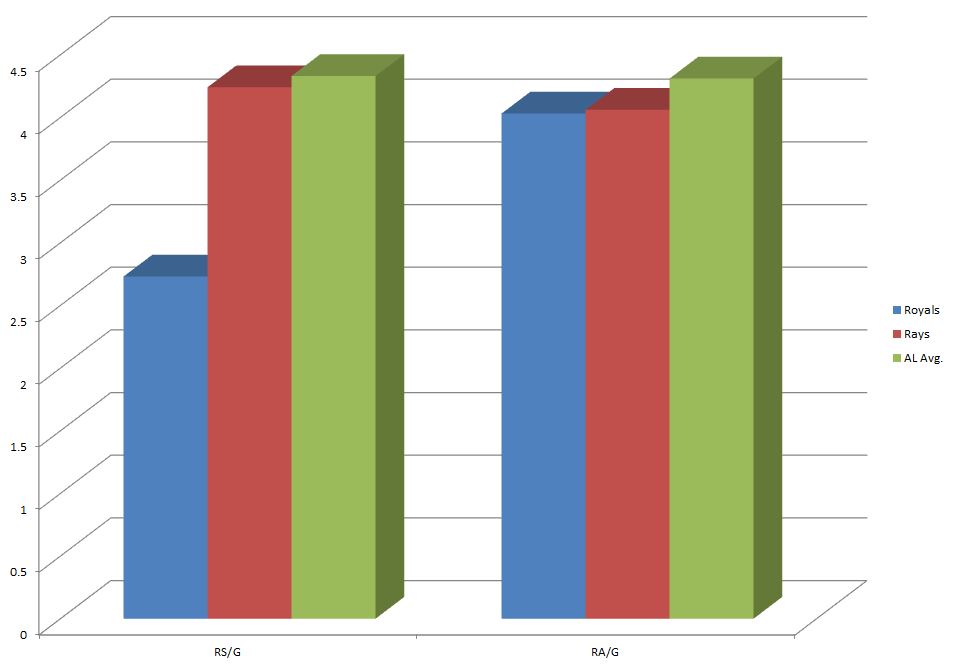 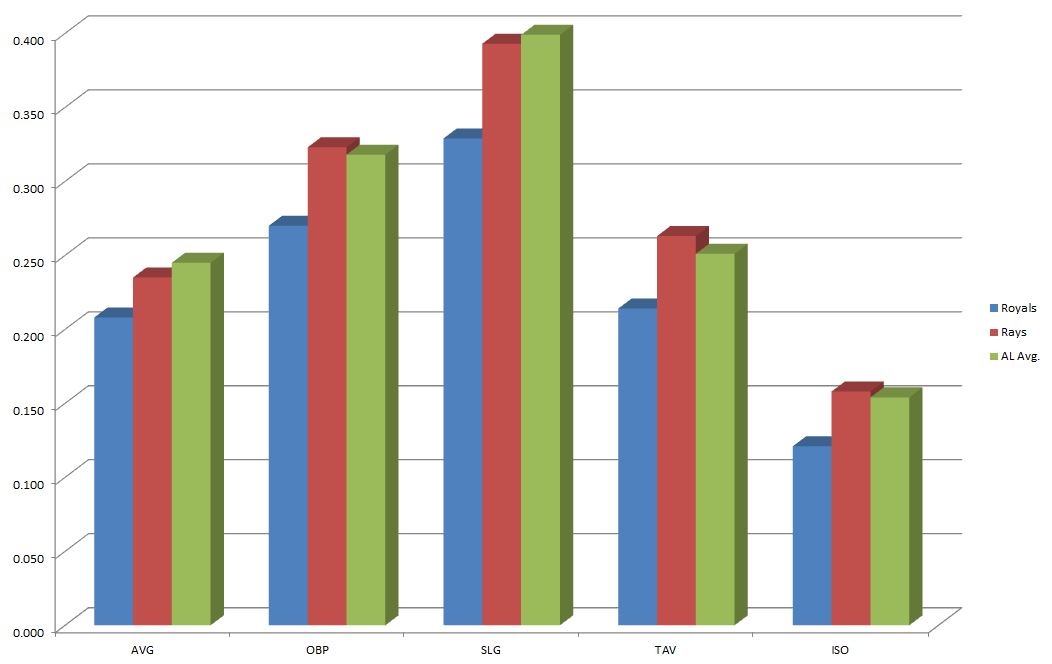 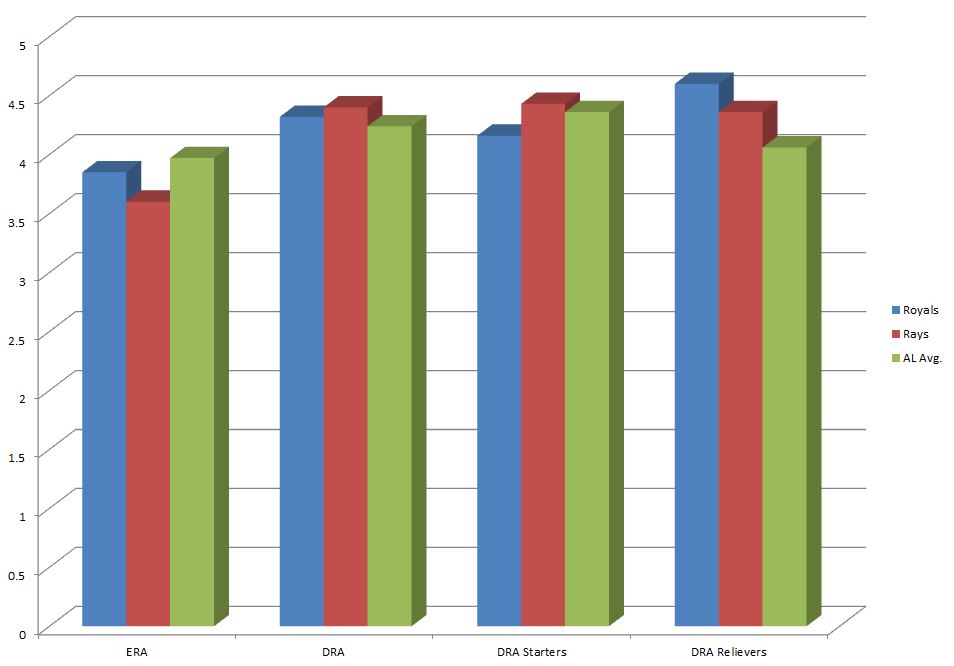 Blake Snell was the 21st ranked prospect prior to the 2016 season and then put up solid numbers over 19 starts. The one issue is that his control was a little all over the place. So far this season, he’s struck out less and somehow walked even more, so that’s a cause for concern for the Rays, though probably not against the Royals. He has a traditional repertoire with a fastball, changeup, slider and curve. He uses the fastball more than half the time and averages about 94 MPH on it with some decent movement. All his pitches have gotten the job done, but he’s given up the majority of his home runs on the fastball, which might be good for the Royals. Snell doesn’t really have a penalty as you get through the order multiple times because his stuff is good, but he has pitched better with runners on than with the bases empty (.619 OPS with runners on vs. .746 bases empty), which is something that should theoretically regress as the season goes on.

Karns faces his former team for the first time as a Royal and the second time overall. In his last start against the White Sox, he showed every bit of the potential the Rays and Mariners have both seen. He went six innings and gave up just one hit, walked just one and struck out seven. It was pretty much the best case scenario Karns start. His curve was insane in this one, eliciting 10 swings and misses and doing the heavy lifting for him. If he has that going, he should have no problem with the Rays.

Andriese has been one of the underrated pitchers to help try to keep the Rays afloat the last couple seasons. He’s pitched as a starter and reliever and done so with a few strikeouts and good control. He’s not overpowering, so he’ll give up his hits, but he’s had a good start to the year, all as a starter. He has a 92-93 MPH fastball, a quality changeup, curve and cutter. The changeup has been outstanding, but the curve has been hit really hard with a .368 average allowed and .579 slugging percentage. Even with those numbers, five of his six homers have been hit off his fastball. He has reverse platoon splits (.802 OPS vs. righties, .641 vs. lefties), so I’m curious if Brandon Moss will play in this one. He’s one of the rare pitchers who actually seems to get better as the game goes on. He’s allowed a .789 OPS the first time through the order, .735 the second time and .690 the third time. Of course, the Royals have hit .181/.264/.263 the first time through the order, so it may not matter.

As it stands right now, Young looks to be the starter, but Yost hasn’t committed to that. Honestly, the goal here for the Royals is probably simply to get to the fifth and be within shouting distance. Now, they might end up going with Jake Junis to start this game, in which case, expectations will likely be typical for Royals starters.

Archer is one of baseball’s best and most underrated pitchers, and a lot of that is probably from losing 19 games last year with a 4.02 ERA. He strikes batters out, he limits hits and he typically doesn’t give up many homeruns. Basically he’s just really, really good. He’s basically a two-pitch pitcher. He throws a really good fastball about half the time. He averages 95 MPH on it with good movement. He also throws a crazy good (when it’s on) slider nearly half the time. He also throws the occasional changeup. The fastball has been hit sort of hard this season with a .227 ISO allowed, but the slider has been incredible. He has given up four hits in six at bats on his changeup. While Andriese has gotten better throughout the game, Archer has been an unmitigated disaster after the second time through the order allowing a 1.012 OPS the third time and a 1.350 OPS the fourth time (though in just 15 plate appearances). I would assume that has a lot to do with him utilizing just two pitches, but I can’t prove that.

Hammel is coming off his best start of the season, allowing just a run on three hits over six innings. It was the first game he recorded double digits swings and misses, so maybe he’s finding his way back to the world of the effective starting pitcher. Like Karns, Hammel was once a Ray, but it’s been nearly a decade, so I imagine the memories won’t be quite as fresh. It’s unfortunate this matchup sets up this way because it’s probably the worst case scenario for the Royals in a series against the Rays, but I think that was also a thought when he faced off against Salazar and that worked out okay.

The series wraps up with another pitcher facing his former team, but this time it’s Odorizzi facing his old club. He’s had a solid start to the season, though he did miss time with a hamstring strain (which kept him out about two weeks, if you were looking for hope that Kennedy may not be out long). He doesn’t get deep in games, having averaged just about 5.2 innings per start over the last three seasons, but he’s also been quite effective in the innings he pitches. He isn’t overpowering, but has a nice mix of pitches. His four seam fastball averages about 91-92 MPH. He also throws a splitter at 84-85, a cutter at 87 and a slider and curve on occasion. His fastball has been mostly effective this season, though he’s allowed a .563 SLG on it and three homers already. He’s allowed a .107/.138/.286 line against righties this season but a .281/.333/.625 line against lefties. I think it’s safe to say all the lefties will get their turn in this one.

Vargas has simply been the Royals best starting pitcher this season. His control has regressed from his first few starts, but he has still been excellent in that regard with less than two walks per nine innings. His six shutout innings against Cleveland featured a bit of a return to form after a start that wasn’t so great against the White Sox (in spite of the results). The Rays have been okay against lefties, but what’s more concerning is that they’ve hit changeups extremely well. It’s worth noting that Vargas has had one of the best changeups in baseball this year, but it’s still something to keep an eye out for in this one.

The last time the Royals played a four-game series on the road, they got swept. I have fears that history will repeat itself, but I think the Royals salvage one. Of course, a 1-3 series (and road trip) doesn’t do anything to help them get back in the race, so they better hope they can take three of four or even pull off a sweep.

Tags: Chris Young, Jason Hammel, Jason Vargas, Nate Karns |
David Lesky
Follow @dblesky
I've been a Royals fan since the day I was born, and have had the opportunity to write about the Royals for nearly a decade now. The winning was better than the losing, but the losing is kind of familiar at least.
read more from David Lesky