Solid day for the affiliates with three wins in four games.

The Chasers offense finally got some things going on Sunday while getting a solid spot start from Christian Binford to even the series in Salt Lake at a game apiece.

Four different Chaser hitters had two hits in the game, with the team sandwiching solo runs in the third and fifth innings around a three-run fourth frame.

In that inning, Omaha received the timely hit they have been missing, getting a two-run single by Dean Anna after a sac bunt by Bubba Starling pushed the runners into scoring position. Catcher Parker Morin, playing in front of a large group of family members, would drive in Anna a couple hitters later with a two-out RBI double

The Naturals ran their scoreless streak versus the Travelers to over 31.2 innings with a second straight shutout versus them on Sunday.

Starter Miguel Almonte had to leave with an injury in the second, but that didn’t stop the relievers from taking over and continuing to pile up zeros. Lefty Sam Selman and Reid Redman did the majority of the work, combining to toss 6.2 scoreless innings with just one hit and a walk allowed.

The Naturals scored runs in the first and third on groundouts before a Zane Evans single capped the scoring in the fourth. It appeared Almonte’s injury was some sort of injury to his hand but it wasn’t announced following the game. 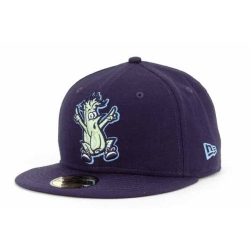 The Rocks offense came up big towards the end of their finale versus Down East.

With the team trailing 4-3 entering the eighth inning, Wilmington tagged the Rangers affiliate for seven runs in the final two frames to take home a series win.

It was Anderson Miller with a solo blast in the eighth that tied things up. One inning later, Wilmington applied pressure with a pair of walks to start the frame before D.J. Burt’s double gave them a lead. After a Miller single tacked on an extra run, it was Chase Vallot’s grand slam that pushed the lead to six and made a winner out of Wilmington.

The Legends struggled to push runners home to drop the third game in their foursome with West Virginia.

The visiting Legends went just 2 for 14 with runners in scoring position, while starter Nolan Watson dropped to 1-5 on the season after allowing four of his six runs in the sixth frame.

Catcher Meibrys Viloria continued his decent run of starts with a 3 for 4 day that included a double.

Checkout the Baseball Prospectus Kansas City Facebook page for the latest links to our articles.