After coming back to earth to start the week, the Royals now hit the road and head to the place that started the trouble this season, Minneapolis. They’ll take on the Twins in a three-game weekend set with a chance to make up some ground in the division that they lost in the season’s first month. The Twins have been one of the surprises in baseball using improved defense and some offense to offset a pitching staff that still has its troubles. Miguel Sano, Brian Dozier and the surprising on base skills of Robbie Grossman are helping to drive the offense along with a nice sophomore year performance from Max Kepler. And hey, the Royals don’t have to face Ervin Santana or Jose Berrios, so that’s a plus. 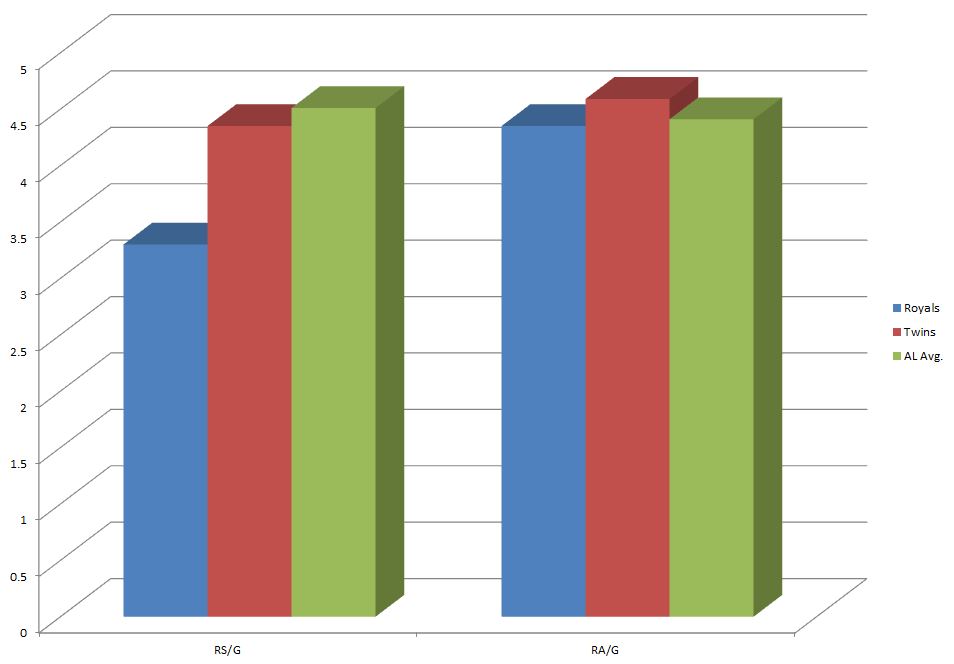 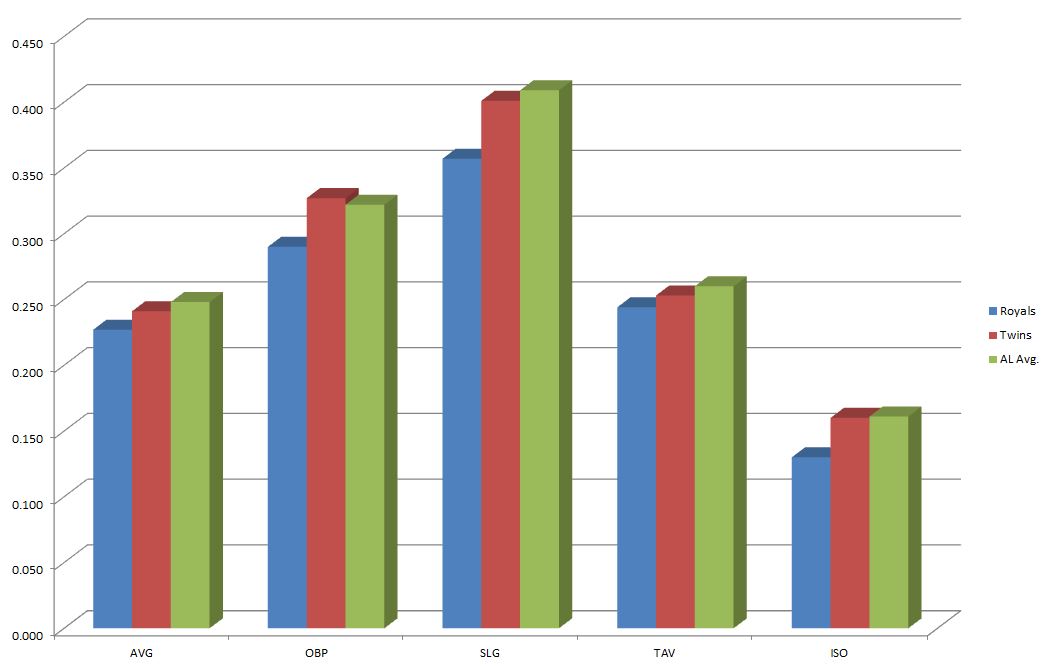 Santiago has had a better season than the numbers would indicate. Prior to his last start, he had posted a 2.76 ERA through his first seven and was averaging about six innings per start. Regression comes at you fast, though, and he allowed six runs in 2.2 innings against the Indians his last time out to see all his numbers balloon. With those six runs came three home runs, which doubled his season total. Now the question is if he can get back on track and shut down the Royals like he did in the season’s opening week or if he’ll continue to regress more to the pitcher he was when he came to the Twins initially last season.

He’s mostly a two-pitch pitcher throwing his four seam fastball about 60 percent of the time and his changeup about a quarter of the time. The changeup is often a very, very good pitch, but it does flatten out from time to time and, when that happens, it’s quite hittable. He also mixes in a curve, slider and a cutter. This season, the power has come on the fastball. He’s allowed five home runs on that pitch, but the cutter and slider have been hit the hardest in the limited sample we have of them being put in play. The Royals have largely struggled against lefties, but Santiago has allowed a .429/.571/.905 line to them this season, so something’s gotta give here. He’s also found a way to actually be better in the third time through the order this season, which you don’t see all that often.

Karns has been very, very good his last few times out, but he’s returning to the scene of where his ERA got out of whack in the first series of the season when he gave up four runs in 2/3 of an inning in relief against the Twins. As a starter, he has a 3.63 ERA and has found the strikeout pitch of late, fanning 26 in his last 12.1 innings. He’s recorded 18 swinging strikes in each of his last two starts and has been in double digits in that category in his last five starts and in six of seven total. He’s not likely to get too deep into games, but if he can keep doing what he’s doing, five or six innings of that will be just fine.

The Twins acquired Mejia from the Giants in exchange for Eduardo Nunez, a player who I thought the Royals would try very hard to acquire this offseason. That doesn’t have anything to do with Mejia, but I’m still surprised they didn’t. It’s also interesting in a way that he made his big league debut and only appearance of the season last year against the Royals. He’ll turn 24 in a month and is actually a pretty decent prospect, though there’s still plenty of work to be done for him.

Mejia throws two fastballs, a changeup and a slider, but he lives on the fastballs that average about 93 MPH with some movement. If you’re looking for a pitch that’s been most effective in his four big league games, you likely won’t find one as they’ve all been rocked pretty hard. Of the 16 hits he’s allowed in 11.2 big league innings, nine of them have gone for extra bases. That seems bad. There’s not much of a big league sample, but Mejia has yet to pitch more than five innings and hasn’t even been able to complete three innings in two of his starts. Of course, he’s a young lefty, so the Royals might have some serious trouble.

Kennedy will make his return in this one, and the Royals and Royals fans couldn’t be more excited. He’s missed his last two starts with a hamstring issue and is still coming off his worst start of the season against the White Sox when he allowed five runs in 4.1 innings before having to exit. All in all, Kennedy has pretty much been Kennedy this season, only with slightly fewer strikeouts than you’d expect. The Twins power concerns me against Kennedy, but he didn’t allow a home run in a loss to them in early April, so maybe now that the offense is going a little better, he can continue that.

Hughes is a cautionary tale for why you don’t give players new deals when you don’t have to. He signed a three year, $24 million deal prior to the 2014 season and was really good. He posted the best strikeout to walk ratio in big league history. So the Twins tore up his deal and gave him a five year deal for $58 million instead. Since then, he’s gone 16-18 with a 4.90 ERA in 257.1 innings over two plus seasons. You see what he’s done this year. Not great, Bob.

Hughes has seen his fastball velocity drop from the 93-94 he threw with in 2014 to about 90 MPH in 2017, which is probably a big chunk of the cause of his struggles. He throws that a lot, too, about 42 percent of the time. He also has a solid curve, a cutter and a changeup. The fastball actually hasn’t been crushed too bad. That’s been reserved mostly for the changeup and the cutter. Nothing has been hit poorly, though, so Royals hitters should enjoy seeing both a righty and a righty they should theoretically be able to hit. This is kind of crazy, but in at bats that end on the first pitch, Hughes has allowed a .632 average and a 1.263 slugging percentage. That accounts for three of the seven home runs he’s allowed this season. But even if the Royals swing early and don’t find success, Hughes has found struggles the third time through the order, allowing a .349/.391/.605 line when facing a lineup a third time.

Hammel has been terrible. There’s no way around it. He’s made eight starts this season. Two have been very good. One has been acceptable. The rest have been downright bad. That’s going to have to change. As it stands right now, the Royals don’t really have another option and they aren’t going to move away from a guy in the second month of a two-year deal, but he’ll be pitching for his rotation life soon enough. There were some encouraging signs from Hammel after moving to the stretch exclusively, but he was brutal against the Yankees on Tuesday and will need a bounceback in this start to gain some confidence, both in himself and from the organization.

With lefties going in the first two games and the Royals being stymied by the Twins this season, I probably shouldn’t feel very good about this series, but I feel like they find a way to take two of three by beating one of the lefties and Hughes.

Tags: Adam Wilk, Brian Dozier, Hector Santiago, Ian Kennedy, Jason Hammel, Max Kepler, Miguel Sano, Nate Karns, Phil Hughes, Robbie Grossman |
David Lesky
Follow @dblesky
I've been a Royals fan since the day I was born, and have had the opportunity to write about the Royals for nearly a decade now. The winning was better than the losing, but the losing is kind of familiar at least.
read more from David Lesky