The Royals finish up their long road trip with their first visit of the season to Cleveland to take on the defending AL champs. The Indians have been an average team to start the season, but I don’t think anyone doubts that the talent is there. Besides, it sure seems that Edwin Encarnacion is beginning to find his swing and get going, which is a scary thought for the rest of the American League. IF he can get it together, their offense takes on a new dimension. The pitching staff almost has to get better when Corey Kluber returns, unless his rough start to the season is going to turn into a rough full season. And oh yeah, the Indians have Kyle Zimmer’s brother, Bradley. He’s not injured. 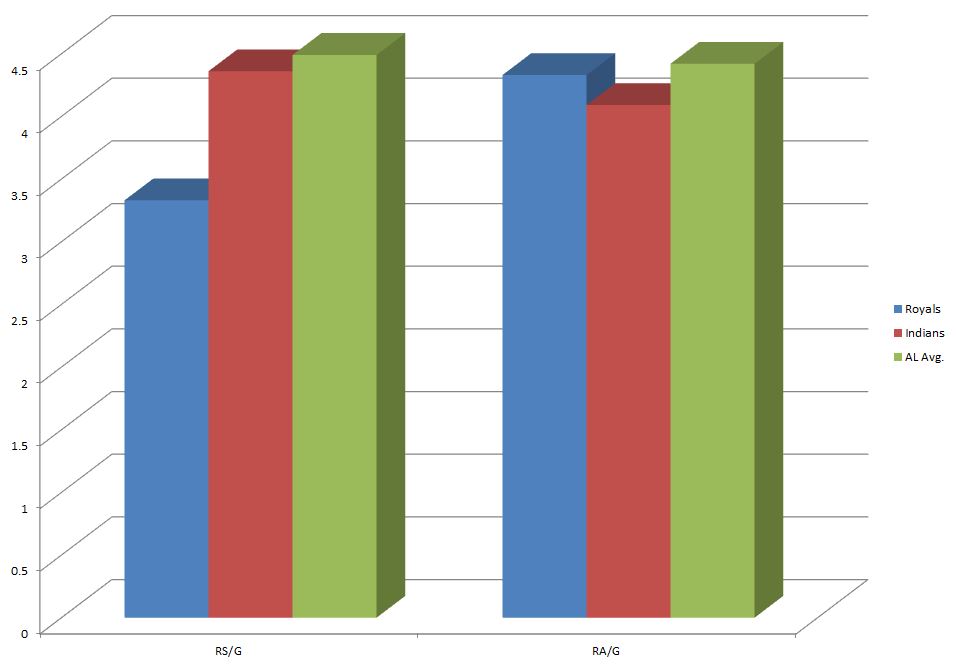 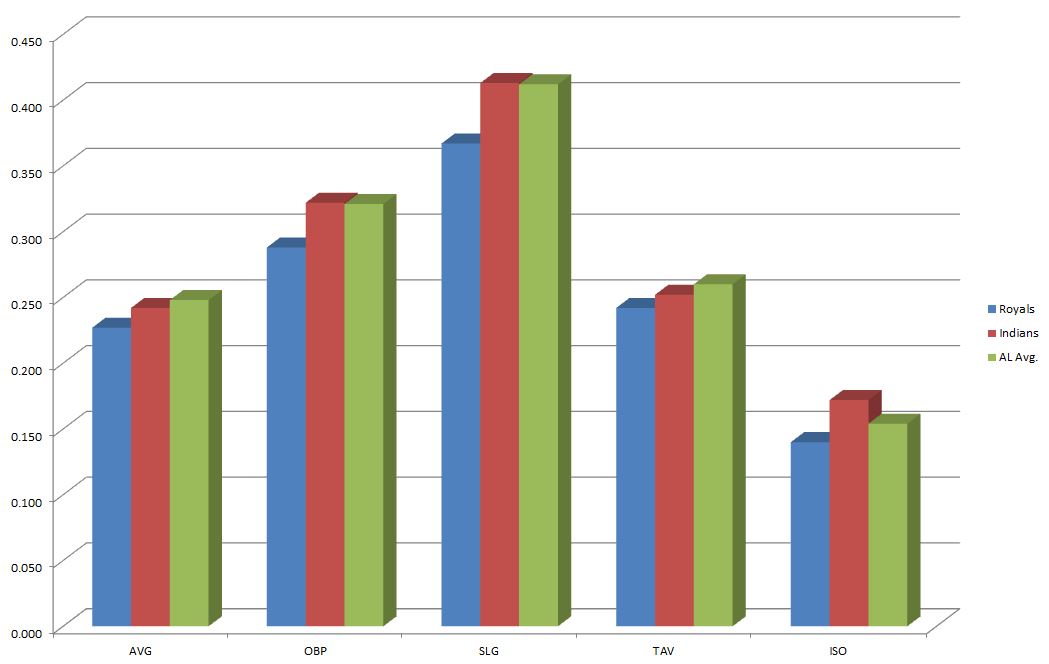 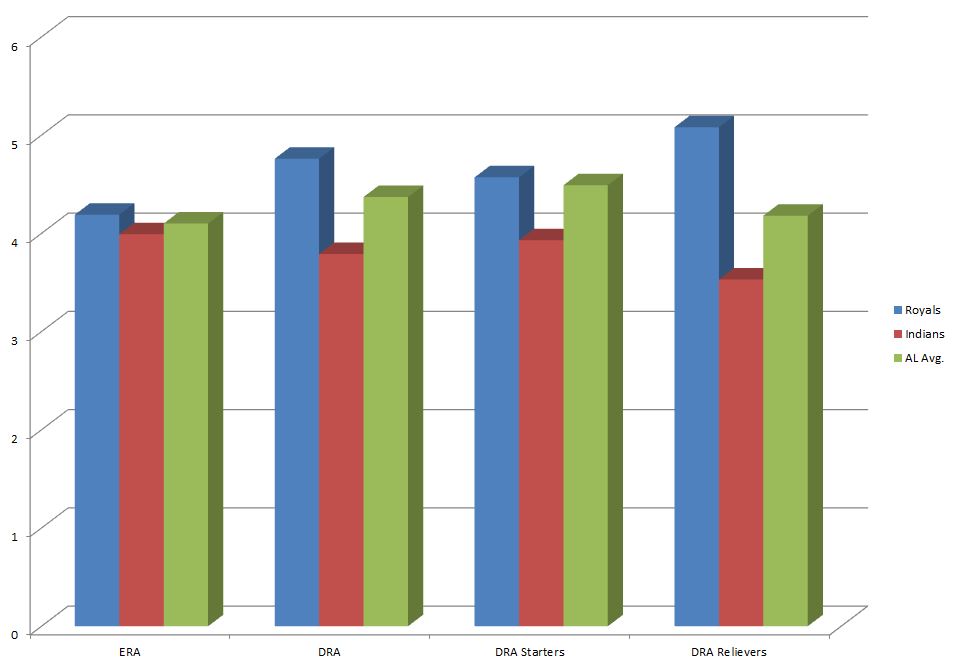 We all remember what happened the last time Clevinger faced the Royals, and it wasn’t pretty. It does look a little better now that he’s pitched well since then, and you can see his overall numbers for the season with a DRA indicating what he’s done hasn’t really been a fluke. Even so, he had a tough go of it in his start following his outing against the Royals before shutting down a really good Astros team over seven innings his last time out.

Clevinger isn’t your typical Triple-A pitcher who came up to make a start in place of an injured pitcher. I think he’s better than that. He’s still likely not good enough to justify getting shut down by him multiple times in a season, though. He throws his fastball a bit more than half the time, and his velocity has been down a little, averaging 92-93 MPH on it but with good movement. He also has a changeup, slider and a curve that he mixes in. In limited action, he hasn’t gotten hit on any of them. Basically, Clevinger’s troubles come from walks more than anything this season. In fact, he’s only allowed one extra base hit total. Clevinger’s given up just six hits total in his 17.1 innings, so there’s basically no split that the Royals can hang their hat on from this season, but in his career, he’s been way tougher on lefties than righties with an OPS allowed to righties of .843 compared to .484 against lefties. Additionally, he’s struggled mightily the third time through the order, allowing an OPS of .685 the first time, .649 the second time and a whopping 1.070 the third time through. Hopefully, the Royals can get it done this time against him.

Kennedy went just two innings in his first start back from the disabled list on Sunday against the Twins. He looked bad, rusty, terrible, whatever adjective you want to use. The thought was that he was pulled early partially to make him an option for the Yankees series finale with Nate Karns having forearm issues. Obviously, the rainout Thursday made it irrelevant. Kennedy will try to redeem himself and get back to pitching as well as he was before the injury.

Salazar has some of the most scintillating stuff in all of baseball, as evidenced by his 13.2 SO/9 and 32.9 percent strikeout rate. The issue, of course, is that sometimes he can’t control it very well, and this year, he’s not nearly as difficult to get hits against once you do make contact. Add in an inflated home run rate, and you can see why he has a 5.55 ERA, but his DRA is down below 3.00. You may recall he pitched well against the Royals earlier this month, but his pitch count was through the roof and he gave up a massive home run to Eric Hosmer in a loss.

Salazar throws hard, but not as hard as he used to. He uses his fastball about 40 percent of the time and it averages 95-96 MPH. He can pump it a couple miles per hour higher, but he doesn’t do it that often. When it’s on, it moves. He also throws a lot of changeups and then rounds it out with sinkers and a few sliders and curves. He’s gotten a lot of strikeouts on the changeup this season, but his fastball and sinker have been absolutely lit up with nine homers and a slugging percentage of .704. He isn’t really getting deep into games either, with 6.1 innings his season high. He’s thrown just 18 innings in four May starts with an ERA of 7.50, so he’s not trending well. The thing is, though, that if you’re going to get to Salazar, you best do it early. He’s allowed a .386/.451/.795 line the first time through the order, but that’s dropped to .221/.299/.353 the second time and .200/.294/.378 the third time. Don’t let him settle in or you’re not going to score.

Vargas is probably happy to get to face anyone but the Yankees. He was better his last time out, going six innings and giving up three runs, but that’s just a tough matchup for him. It’s not that the Indians are that much easier with power up and down their lineup, but a lot of their power is right-handed, which the Vargas changeup can neutralize. He’s allowed just a .189/.250/.270 line to righties this season. He needs to watch out for Kipnis and Brantley, but I think this is a lineup he can navigate. He pitched six shutout innings against them earlier this month.

I’ve never really understood how Tomlin had success as a big league pitcher, but he’s been solid enough over the past couple seasons. This year, that’s a different story, but he’s getting beat differently than in the past. He still has the excellent control with less than a walk per nine innings (only four walks all season), but his lack of swing and miss is hurting him now as he’s allowed 63 hits in 47 innings. Of course, that didn’t stop him from giving up one run on three hits over seven innings against the Royals earlier this month. If it helps, he had a really good start his next time out against the Twins too, but has fallen on hard times since.

Tomlin has curbed his home run trouble somewhat by switching from a four-seam fastball to more of a sinker. He still throws the four seamer, but only about eight percent of the time. Instead, he uses his sinker about one-third of the time and his cutter about one-third of the time. The sinker comes in at 87-88 MPH while the cutter is just a touch slower. He also has a curve and a change to round out his repertoire. In spite of the increased sinker usage, it hasn’t helped him get outs as opponents are hitting .386 with a .579 slugging percentage against it. His curve has been his best pitch this season, but even that’s gotten hit for some power. So here’s the issue with Tomlin: He’s around the zone and he doesn’t have great stuff. That means it’s probably a good idea to swing at the first pitch, and the numbers back that up. He’s allowed a .385 average and 1.000 slugging percentage on the first pitch this season. But the problem is that if it doesn’t work, you’re letting him get very deep into the game because his pitch count is staying low. Still, I’d go with the strategy of swinging at the strikes and hope for the best.

Duffy is coming off a pair of fantastic starts against the Yankees. He gave up just two runs on nine hits over 14 innings while striking out 17. And one of the runs he allowed was on a Yankee Stadium special. It still counts, but the Royals don’t have to go back there this year, so it’s tough to count on that happening again. After back-to-back rough outings against the White Sox, Duffy has made four starts and gone 27.2 innings with a 1.63 ERA and 25 strikeouts, so I’d say he’s back on track. His fastball showed more life in his last start than we’ve seen most of the season, topping out at 96.2 MPH and averaging 94.9, which is about a full mile per hour above his season average. That’s good news if you’re in the fan of Danny Duffy business.

The Royals are tough to predict. The Indians are the better team for sure, but the Royals do seem to have the pitching edge on paper in at least one game and maybe two games of the series. I’m going to go out on a limb and say they somehow win two of three to gain some new hope back as they head home. I’m not saying they’ll make good on that hope, but I think they’ll get some of it back.