The Royals return to The K for a pivotal home stand that begins with their first look at the Detroit Tigers. While many are disappointed in the way the Royals have started the season, the Tigers might be even more disappointing. It’s hard to pinpoint one particular thing that has plagued the Tigers this season, but it certainly hasn’t helped that Miguel Cabrera and Victor Martinez have been quite pedestrian, and outside of Michael Fulmer, the rotation has been rough even though I think many expected they’d be better. And of course, there’s the bullpen, but that’s nothing new for the Tigers. The especially good news for the Royals is that Ian Kinsler is on the disabled list for this series. 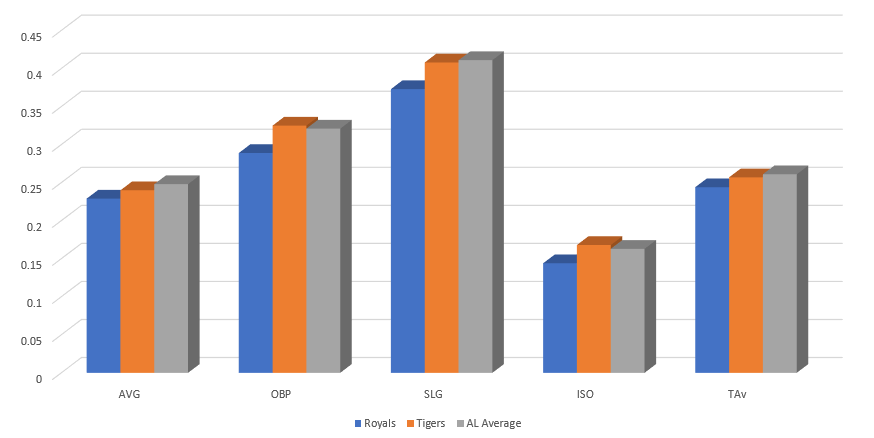 I thought Daniel Norris was going to break out in a big way this season, and so far, that just hasn’t been the case. His control has taken a step backward and the strikeout rate he showed last season has dropped a bit, which has made the strikeout to walk ratio less than desired.

Norris is a fastball-slider pitcher for the most part. He throws the fastball about 56 percent of the time and averages nearly 94 MPH. It has some good movement, so when it’s on, it’s trouble. He throws the slider nearly one-quarter of the time at 87-88 MPH, so it’s a pretty hard slider. He also mixes in the occasional changeup and curve. The issue he’s had is that the two pitches he throws the most have been hit for extra bases quite a bit more than you’d like. In fact, he’s allowed 18 XBH in 167 at bats this year on those pitches. Norris has had an interesting platoon split this year with a .263/.356/.500 average allowed to lefties and .294/.367/.413 to righties. So righties have gotten more hits, but lefties have hit the ball with more authority, which could bode well for the Royals with their left-handed power. The key against Norris is to not fall behind in the count. He’s allowed a .194/.194/.258 line when ahead and a .443/.574/.729 line when behind in the count. Plate discipline will be the Royals friend.

Jason Hammel looked about as good as I’ve seen him this year in his last start against the Yankees even if the results weren’t that great. The 14 swinging strikes he elicited were a season high, as were his seven strikeouts over six innings. If he can carry that into this matchup with the Tigers, he should fare quite well. However, he also has had only two really good starts this season, so I’m not exactly optimistic.

The former Cy Young winner looked like he might be turning his career back around last season with a 3.04 ERA in 34 starts. It was his best year since 2012 and he seemed primed to have another big season. So far, he hasn’t, as you can see from the 4.87 ERA. Like Norris, his control has taken a step backwards while his strikeout rate has dropped from last season. Between that and giving up a few more hits, he’s posted a 1.41 WHIP this year, which is less than good.

His fastball velocity is up this season, to an average of 95-96 MPH, and he’s still throwing it around 59 percent of the time. His slider comes in hard, at 90-91 MPH, and he throws that around 19 percent of the time. He rounds out his repertoire mostly with curves, but he does throw the occasional changeup. It’s really been the walks that have killed him, but he’s allowed a .391 average and .609 SLG on the changeup. It’s a little bit weird, but the big issue for Verlander has been the second time through the order. He’s allowed a .578 OPS the first time through and the .672 OPS the third time through. The second time, though, he’s allowed a .301/.356/.578 line. If you’re looking for an explanation for that, well, I don’t have one.

It looks like Eric Skoglund will make his big league debut Tuesday after he was scratched from his start in Omaha on Sunday. He hasn’t been great in Triple-A with a higher ERA, but his peripherals are quite good. He’s in his fourth professional season, so the stage shouldn’t be too big for him. He throws a little harder than your typical finesse lefty, but that’s basically what he is. He’s the type who could have some success his first time through the league. If Skoglund isn’t the guy, we’ll update.

Like Norris, Boyd was one I thought was going to make some great strides this season, but he’s been way worse than Norris. This is a running theme, but his walk rate is up from last year and his strikeout rate has dropped. He’s also allowing 11.7 H/9 this season, which has led to an awful lot of base runners. This may be breaking news, but allowing base runners is not great for a pitcher.

Boyd has used his fastball a bit less this season and incorporated his changeup a lot more. His four-seamer comes in around 92 MPH, and his sinker is just a bit slower than that. What’s interesting is that even though he’s struggled this season and you’d think his changeup has been the problem, it really hasn’t. He’s allowed a .386 average and a .682 SLG on his four-seamer and a .333 average and .567 SLG on his sinker. Those two pitches just haven’t worked at all this season. His slider has also been a disaster, but he throws that a lot less. While Boyd hasn’t been good in any situation, he’s been especially brutal with runners in scoring position, allowing a .349/.483/.558 line, and he’s had plenty of opportunities with runners in scoring position with all those runners he’s allowed.

Kennedy has looked like a guy who needed some rehab starts before coming back to the big league roster, but he did settle down against Cleveland after struggling early. He hasn’t gotten many swinging strikes his last two starts, but he strangely got 19 strikes looking against the Indians. Hopefully his last couple innings can carry over in this one.

I don’t think the Tigers are especially good, but I do wonder if they aren’t a terrible matchup for the Royals. A couple of lefty starters could be trouble for them, and Verlander is always tough no matter how he’s pitching. I think the Royals pick up one win this series, but that’s it.

Tags: Erik Skoglund, Ian Kennedy, Jason Hammel |
David Lesky
Follow @dblesky
I've been a Royals fan since the day I was born, and have had the opportunity to write about the Royals for nearly a decade now. The winning was better than the losing, but the losing is kind of familiar at least.
read more from David Lesky