After a disappointing series against Detroit, the Royals welcome the Cleveland Indians to town for the second time this season. They’ll be seeing them for the second straight weekend. You may recall last weekend went well with a series win, but there was a bad taste left in the Royals collective mouths after getting drubbed in the series finale. Somewhat surprisingly, the Indians are continuing to tread water, but it seems as if the Twins may be regressing, so the Indians have a chance to seize the Central, and a series against the Royals seems like a good place for them to start. 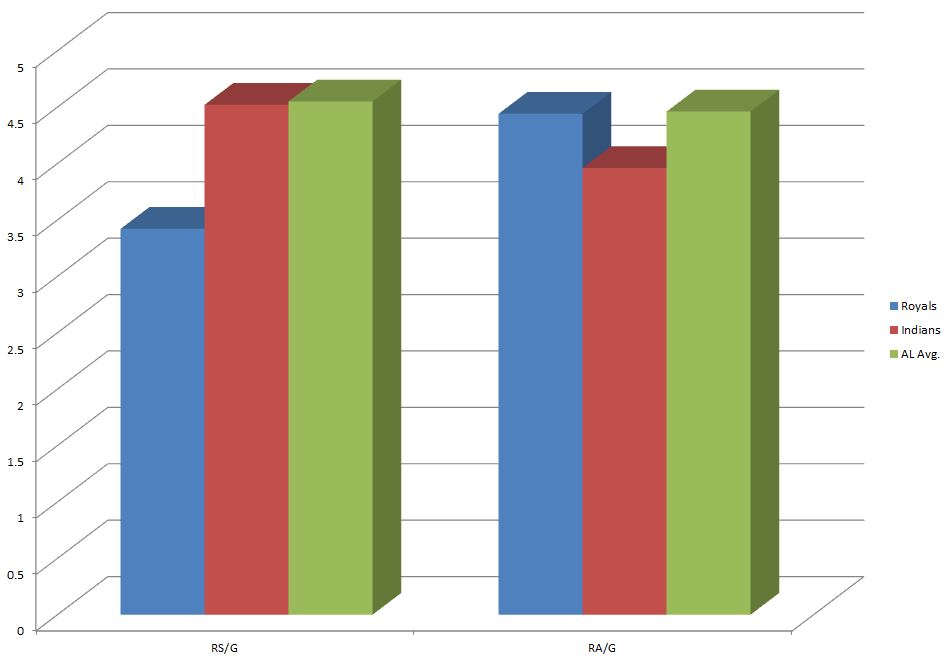 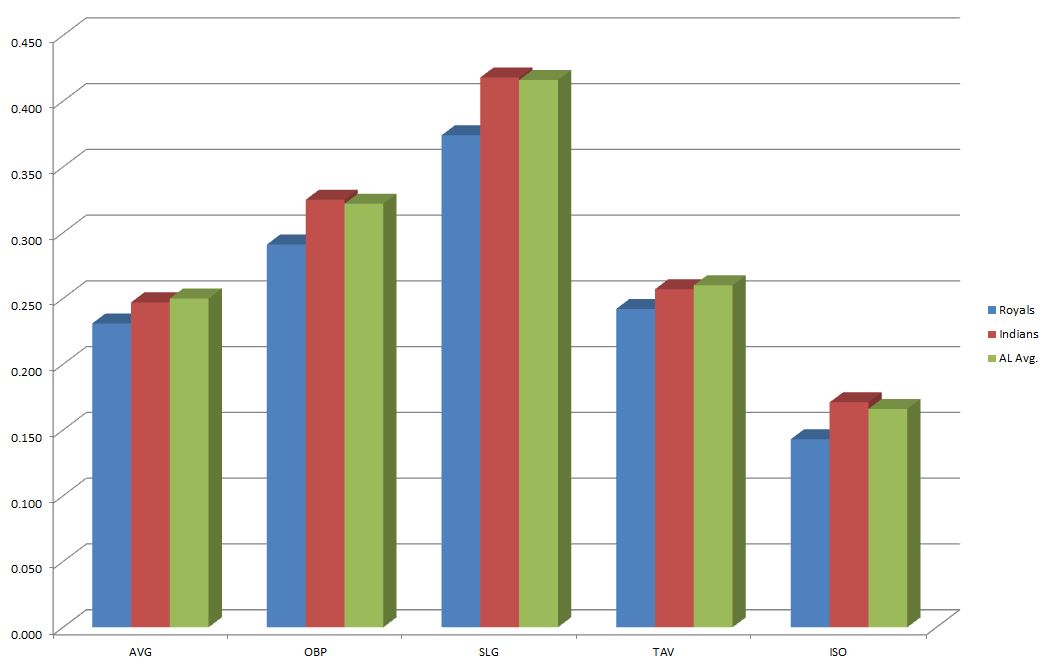 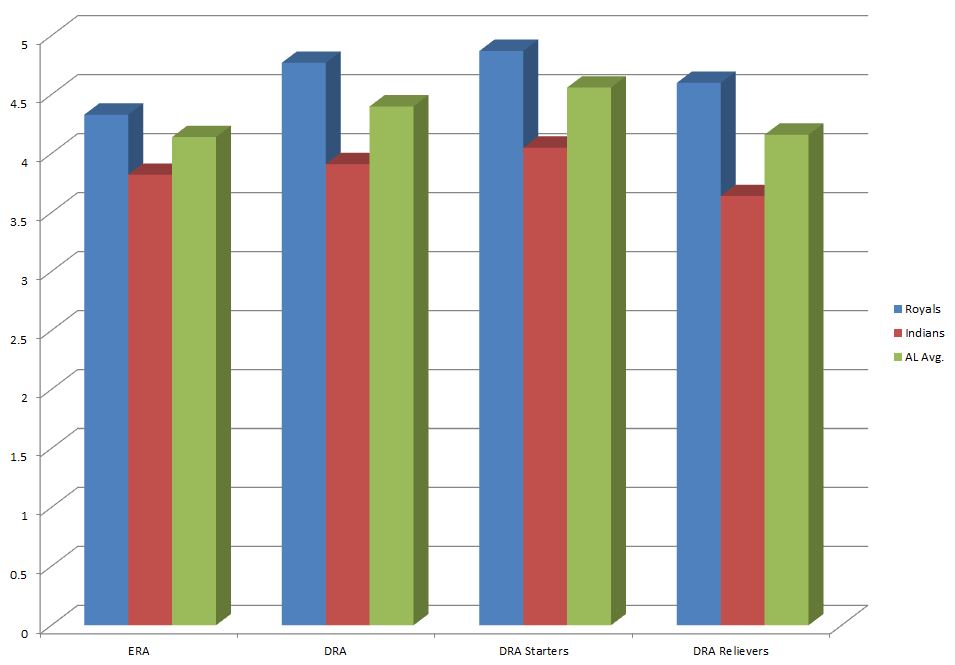 Have you ever tried to do something that it seems like everybody can do but you just can’t figure out the best way to get it done? That’s the Royals offense with Josh Tomlin. This year, he has five starts out of his 10 where he’s given up at least four runs and three where he’s given up at least six. Against the Royals, he’s gone 16 innings and given up two runs on nine hits. This is a guy who has given up 69 hits in 56 innings for the season, so that means he’s allowed 60 hits in 40 innings to everyone but the Royals. Maybe seeing him for the second time in less than a week will help, but I have my doubts.

Like I mentioned last week, Tomlin has moved to a two-seamer this season more than his four-seamer which has allowed him to give up fewer home runs. Neither is impressive with velocity, averaging around 88 MPH. He also has a cutter and a curve, which both look better after his last outing against the Royals, but both have been hit pretty well. The cutter has been hit for singles while the curve has been an extra base hit generator. Of course, everything has been hit hard this year for him in general. Tomlin is a control artist, having only walked four hitters in his 56 innings. I mentioned this last week, but swinging early isn’t the worst thing against him. What I didn’t mention is that getting behind in the count to him isn’t necessarily a terrible thing as he’s allowed a .153 ISO when he has the advantage. He also has better numbers the third time through the order, but I think that’s partially because the only times he gets there is when he’s pitching well enough to get there.

Vargas was okay against the Indians last weekend, allowing two runs on nine hits in 5.2 innings, but it looks like we’re back to getting the Vargas we expected when the season began. That’s actually fine because that’s who he is, but it’s too bad he couldn’t extend his great run a little longer with Danny Duffy and Nate Karns on the disabled list. Still, he’s doing a nice job of getting the Royals innings and maybe he can get back to his dominant ways, but I think this Indians lineup can be trouble for him, especially after getting a look at him just a week prior.

I’ve thought for a couple years that Carrasco was the Indians best pitcher even if the numbers pointed to Corey Kluber. This year, the numbers are backing that up as well. He’s just really tough to face. The one question he has to answer this season is if he can put in a full season and get to 200 innings. He has made 30 starts once in his career, but his career high in innings is 183.2. The Carrasco story should be a familiar one to Royals fans as he moved to the bullpen for a time, ditched the windup and became an excellent starter.

Carrasco works with a very good four seam fastball that averages about 94-95 MPH but he can reach back for a little more when he needs it. He also throws a slider, changeup, curve and the occasional two-seamer. I’m a little puzzled by the trouble he’s had on his fastball this season as he’s allowed a .326 average and a .663 slugging percentage with a whopping seven home runs off it this season. Every other pitch has been flat out dominant, so he’s getting the job done, but when the fastball finally does come around, look out. Most of the power he’s allowed has been against lefties with a .440 slugging percentage allowed to them compared with .283 to righties. Whereas with Tomlin you can afford to get the count deeper, Carrasco is a guy you want to either get early or get ahead of. He’s allowed a .370 average and .593 slugging percentage on the first pitch and an .883 OPS when he’s behind in the count, but when he’s ahead, opponents have hit .135/.144/.225 against him. Yeesh.

I honestly don’t know what to make of Hammel. One game he looks really good in a tough park to pitch in and then the next, he blows up in the middle innings. One game he struggles early but is able to give the Royals innings to save the bullpen. Then one game, he’s just really good in general. My guess is he’s probably more of a middle reliever at this point, but the Royals don’t have the luxury of using him in that role, so he’s starting again and the hope is that he can figure out a way to get the job done. The encouraging thing is that he got the job done against this very Indians ballclub in early May with six strong innings in his first start exclusively from the stretch, so hopefully that can continue.

Speaking of enigmas, here’s Trevor Bauer. He has a 6.00 ERA, but is striking out 11.5 per nine innings. He has no-hit stuff but has allowed more hits than innings pitched. There’s just such a divide between what he looks like on the mound and what he is and that’s a big reason why his DRA is so drastically different from his ERA. His last start was probably his jewel of the season. He went seven innings and allowed three runs but struck out 14 and walked just one. He did throw 113 pitches, so maybe there’ll be a next start impact there, but if he’s getting into a groove, the Royals are exactly the team you want to face next.

Bauer has always thrown a lot of pitches, but he does seem to have narrowed down his choices some this year. He has a four seamer that he throws at about 94 MPH with a little more if needed. He has a sinker he throws just slightly slower. After that, he has a curve and a cutter and then mixes in the occasional changeup and splitter. Basically, the hard stuff is where he’s run into trouble with 11 homers allowed on his four seamer, sinker and cutter. His curve has been dirty at times. It’s worth mentioning that he has at least 20 strikeouts from three different pitches, so there isn’t any one pitch to watch for with two strikes, which makes a pitcher tough to face. Lefties have lit up Bauer with a .286/.339/.561 line against him, so that’s a good thing for the Royals. He’s also really struggled with men on. With the bases empty, he’s allowed a .211/.277/.352 line, but with runners on, that skyrockets to .375/.409/.750. It’s led to just a 64.5 percent strand rate, which is both below average and well below his career numbers.

Skoglund was a great story in his first start and I don’t think many will forget his walk off the mound after going 6.1 shutout innings against a very tough lineup. I said in the Tigers preview that he seemed like a guy who might be able to be really good his first few starts until a book is out on him, and I still believe that to be true. Unfortunately, part of being so good is that your next opponent will take notice quicker, so I’m a little worried for this start. The Indians power from the right side with Lindor, Santana and Encarnacion is worrisome, but he’s definitely earned a second start, so we’ll see how that goes.

I never feel confident with the Royals against Tomlin and I worry about the rookie in the series finale. That would all be fine, but I really hate the Carrasco/Hammel matchup in the middle. That said, I just have a feeling the Royals find a way to squeak out two wins in this series. There’s no logic behind that, but there’s really no logic behind this team, so here we are.

Tags: Eric Skoglund, Jason Hammel, Jason Vargas |
David Lesky
Follow @dblesky
I've been a Royals fan since the day I was born, and have had the opportunity to write about the Royals for nearly a decade now. The winning was better than the losing, but the losing is kind of familiar at least.
read more from David Lesky