The Royals welcome the thorn in their side, the Minnesota Twins, to town for a four-game set with all four games being played over three days. This series is just ridiculously important for the Royals if they want to make up ground in both the Wild Card race and the American League Central as the Twins are in front of them in both. The Twins are a surprise, of course, but even if they do fade, they’re still a nuisance rather than afterthought.

I’m still not entirely sure how they’re winning as the offense isn’t good and neither is the pitching. Ervin Santana has been outstanding this year and Jose Berrios has been a shot in the arm, but outside of that, they don’t have a starter you can trust. The bullpen isn’t especially good either. They do have Miguel Sano offensively, but he’s come back to earth a bit over the last month (though still hitting home runs). Robbie Grossman has found a lot of time on the bench lately, in favor of Eduardo Escobar’s bat and likely his defense that allows Sano to DH. 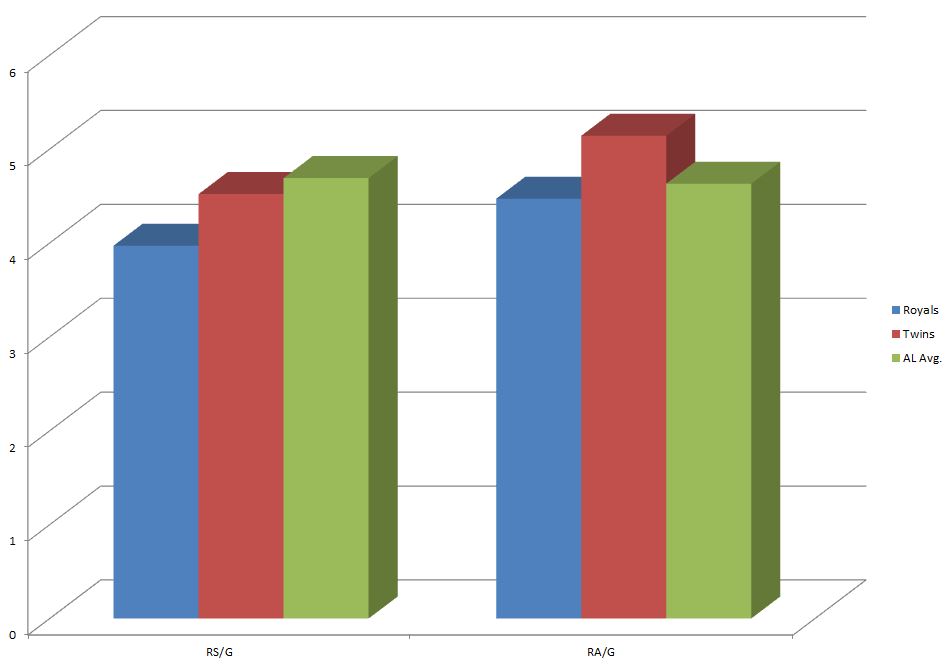 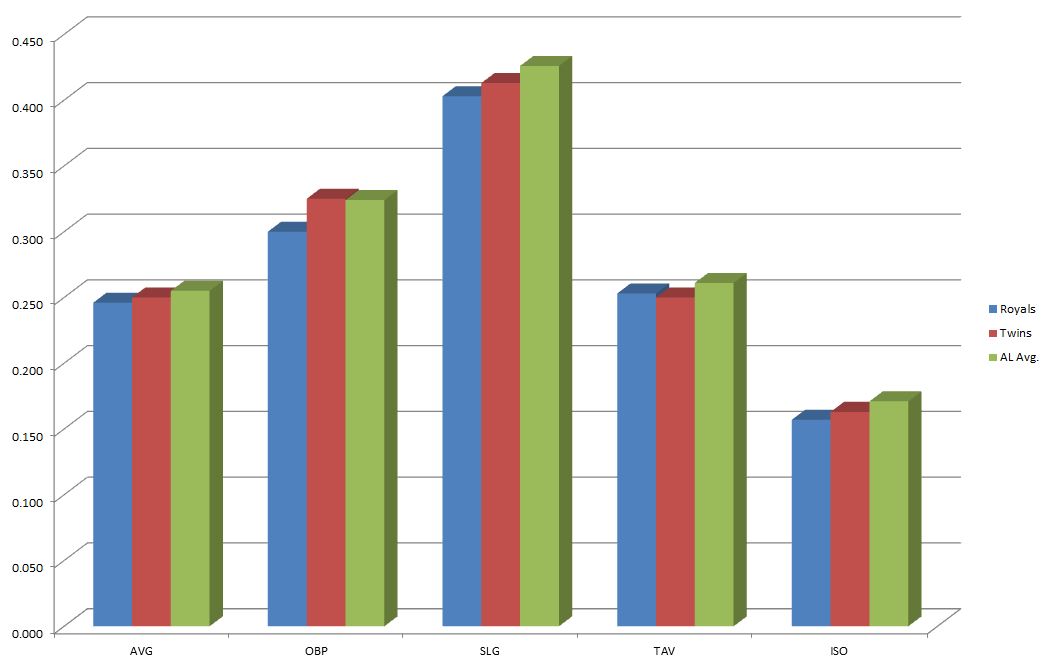 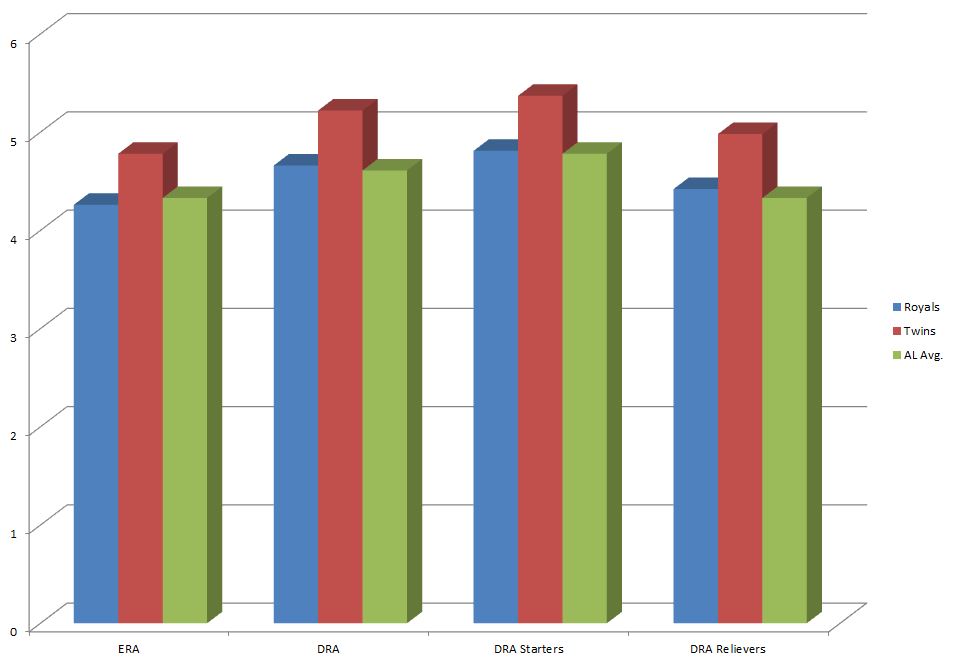 This is the marquee matchup of the weekend. Both veterans are having fantastic seasons, with Santana’s coming on the heels of a really good season last year. His strikeouts are a bit down and his walks up a tick, but he’s allowed just 75 hits in 106 innings. It sure seems like his peripherals won’t allow him to continue, but allowing that few hits can mask a lot of deficiencies.

Erv is a pretty simple pitcher these days. He throws a four-seamer, a two-seamer, a changeup and a slider. All have been extremely effective, but 41 out of 131 plate appearances that have ended on the slider have ended because of strikeouts. It’s the pitch to watch for when he gets ahead in the count. While curves have given the Royals trouble, sliders have been something they’ve been able to hit well with Whit Merrifield, Eric Hosmer and Lorenzo Cain all doing especially well against them. That could explain why Hosmer has hit .308/.438/.731 against Santana in 32 career plate appearances with just four strikeouts. It’s probably worth noting that as good as Santana has been this season, he has posted a 5.59 ERA in June, though with the best strikeout rate and lowest walk rate of any month this season. But remember the hits allowed? He’s given up 39 in 29 innings this month.

Vargas is rolling. Since he took the loss against the Yankees on May 22nd, he’s 6-0 with a 2.27 ERA and is averaging about 20 outs per game. That’s exactly what the Royals need. He’s allowed two or less runs in 11 of his 15 starts. Somehow he hasn’t faced the Twins this season, which explains the Twins dominance over the Royals. They haven’t had to fear the Vargy.

There was a time not long ago that facing Berrios was exciting for the opponent. That time was last year. After opening this season in the minors, Berrios has come to the big leagues and has been as dominant as the Twins could have hoped. He’s given up just 42 hits in 60.1 innings. He’s striking guys out. He’s throwing strikes. It’s basically all come together and the scary thing is that he’s just 23. He’ll be around a long time to terrorize the Royals.

Like Santana, the repertoire for Berrios is basic. He throws a four-seamer, two-seamer, changeup and curve. A couple differences from last year are blatantly obvious. One, his fastball is just more effective, but that’s partially because everything else is more effective. He’s gotten strikeouts with the curve 26 times out of 66 at bats ending on it. Based on what we’ve seen from the Royals against guys with this kind of profile, they might have a real tough time getting through this one against Berrios. If you’re looking to find a statistical weakness with Berrios, there really isn’t one, though there is a risky play the Royals could go for here. He throws first pitch strikes about 61 percent of the time and throws one of his fastballs on the first pitch about 63 percent of the time. If the Royals want to try to ambush, he’s allowed a .409 average and .591 slugging percentage when the first pitch is put in play. Of course, that could allow him to keep his pitch count down and keep him in the game longer.

The Royals will hand the ball to Luke Farrell for his big league debut to start the first game of the double header. His overall numbers in Omaha aren’t great, but a lot of that is due to giving up 11 runs over five innings against Reno on May 21st. Since that start, he’s been fantastic, going 3-1 with a 1.63 ERA in six starts spanning 38.2 innings pitched. In that time, he’s struck out 44, walked seven and allowed just 23 hits. Nothing will especially wow you about Farrell, but he’s a smart pitcher and, yes, he’s the son of the Red Sox manager, John Farrell.

I’m going to be real honest with you here. I’ve never seen Jorge pitch. He was ranked #11 in the Baseball Prospectus Twins top prospects list in the offseason. Here’s what Jeffrey Paternostro had to say about him:

Jorge is the kind of backend arm with solid-average velo and a full array of average-ish secondary pitches that usually settles in towards the back of these top ten lists. The fastball lacks wiggle, but gets some plane even out of Jorge’s six-foot-two frame due to his higher slot and how tall he stays throughout his delivery. The curve will flash 55, the change is fairly advanced, but he may lack an out pitch—Double-A hitters had far less trouble squaring him than A-ball ones. The delivery doesn’t use his legs much, which is ironic because his thin frame is about 70 percent legs, but the mechanics and arm action are relatively low effort. He’s a back-end guy with some physical projection left. Jorge’s an interesting prospect, but not quite a top ten one until he the stuff plays a little better in the upper minors.

From a statistical standpoint, nothing really wows you. He’s allowed more hits than innings pitched and has given up some long balls this season, but he’s gotten relatively deep into games. If his curve is good, I fear the Royals might struggle, but without that out pitch, Jorge appears to be the type of pitcher the Royals should be able to handle. Of course, it’s also their first time seeing him and we know how that goes with this team.

Jason Hammel will go in game two as the Royals want to keep him on a regular night schedule, I guess. He didn’t have the same command in his last start that he’d shown throughout June, though some of that was due to an interesting strike zone. Still, he got through five innings giving up just two runs in what was ultimately a blowout loss. In 32.1 innings in June, he had a 2.51 ERA and struck out 25 while walking just four, so it looks like the guy the Royals thought they were getting when they signed him has arrived.

After starting the year with a 2.76 ERA through his first seven starts, things have gotten tough for Santiago. He gave up a lot of runs over his next five starts and gave up two runs in one relief inning as well. Then he went on the disabled list for three weeks and came back this past week to give up two runs on one hit in two innings. All of a sudden, the guy who started the year so well has an ERA up to 5.37 and you can see the DRA as well. Not great.

Santiago relies heavily on a fastball/changeup combination. While both can be great pitches, if either or both are not at their best in a game, he can get hit hard. This season, the changeup has been great with a .200 average allowed and a .292 slugging percentage, but he’s allowed 12 homers on the fastball in 154 at bats. If you’re looking for a click to pick in the series, Eric Hosmer is a good choice as he’s hit Santiago quite well with a .406/.457/.625 line against him in 35 plate appearances. Also, Alex Gordon and Salvador Perez each have two homers against him.

Unless Wood is needed to pitch before this game, it looks like he’ll get his first start of the year. He has seven straight scoreless outings, spanning 9.1 innings, so that’s definitely a good thing and it corresponds to him backing off using his four-seam fastball as much and adding in a two-seamer. Causation and correlation and all that, but when a pitcher makes a change and then good things happen, it seems a little more sustainable than when they don’t do anything and magically get better. The right-handed power of Sano and Dozier worry me against Wood, but it’s not like Strahm was lighting it up his last couple starts anyway.

The Royals need to win three of four here. I don’t think they will, though. Skoglund worries me, as does Strahm. I did mention that the Twins have struggled more against lefties, but I just feel like at least one of them struggles and then you have to be perfect in the other three. I’ll predict a split here with one coming in the double header.

Tags: Eric Skoglund, Jason Hammel, Jason Vargas, Matt Strahm |
David Lesky
Follow @dblesky
I've been a Royals fan since the day I was born, and have had the opportunity to write about the Royals for nearly a decade now. The winning was better than the losing, but the losing is kind of familiar at least.
read more from David Lesky