The Royals wrap up their homestand with a brief two-game set against the St. Louis Cardinals. They’ll begin the next trip with two against the Cardinals in St. Louis to complete the four-game home and home, but we’ll preview those two games ahead of those games on the road. Things haven’t gone especially well for the Cardinals this season, but they sit just 3.5 games out of first in spite of being a game under .500. In true Cardinals fashion, they’ve gotten offensive contributions from some unlikely sources such as Paul DeJong and Tommy Pham and they’ve gotten solid pitching from their rotation as well as some decent relief work, though they’re not without their bullpen issues, like most teams. 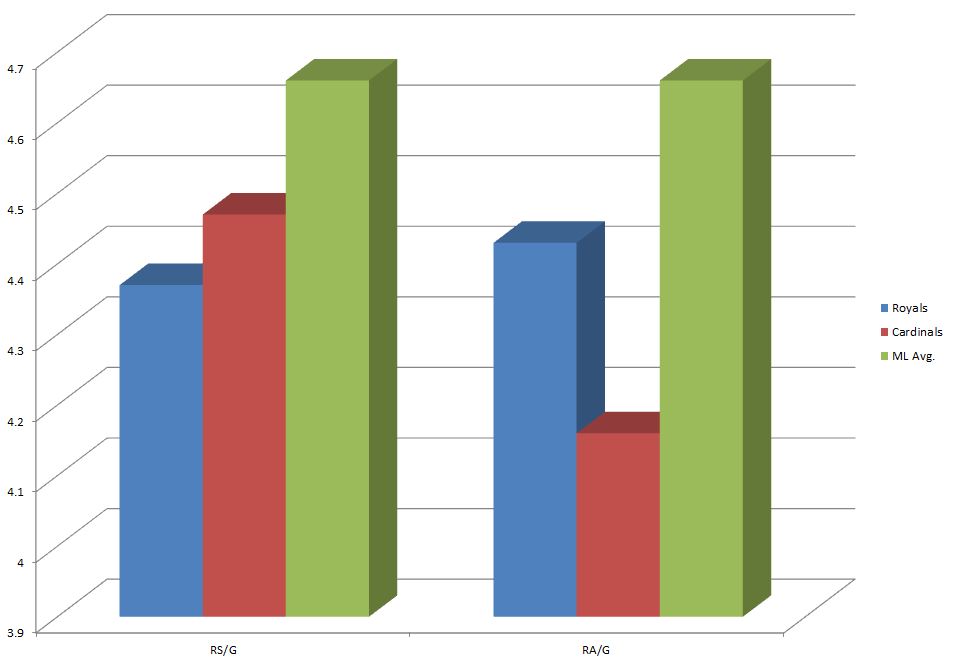 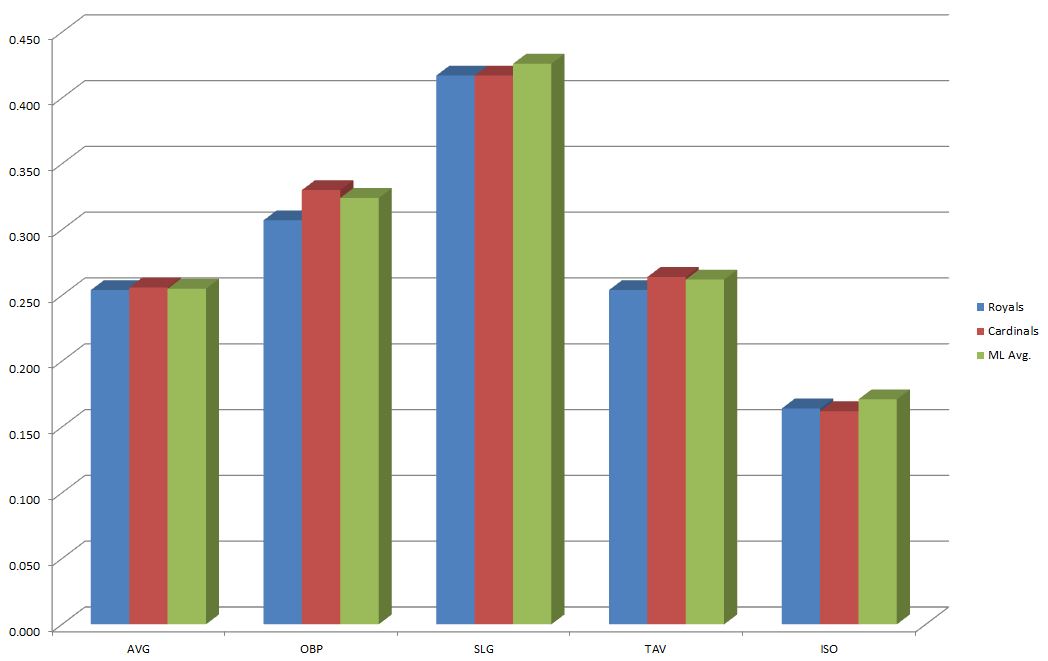 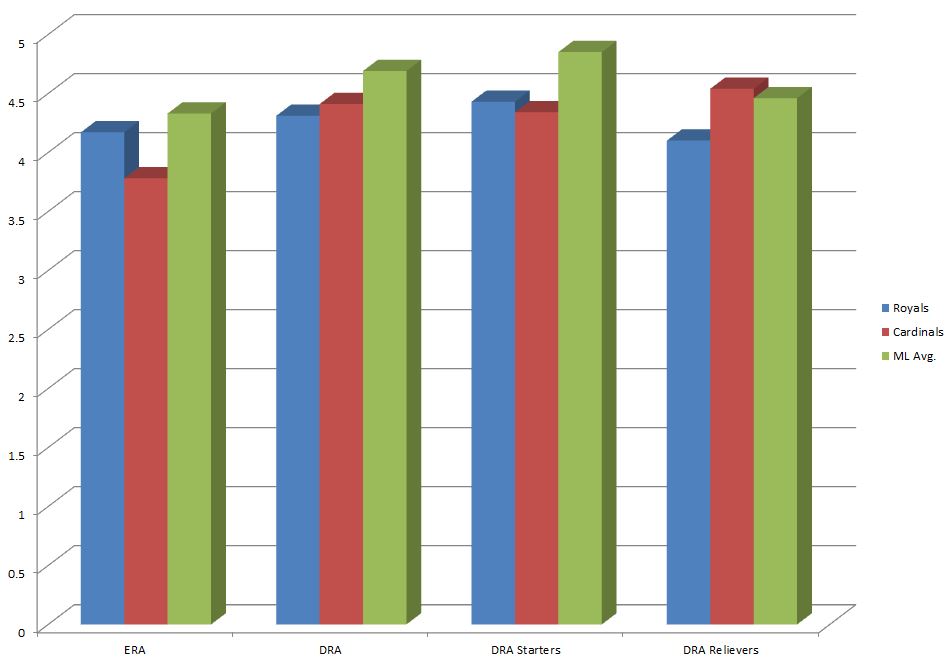 Martinez is the Cardinals young ace, complete with the long-term deal and the Opening Day start this season to signify it. And he’s been good this year, but in many ways he’s taken a step back, with a higher ERA, more walks and more homers than the past three seasons. In spite of that, his DRA is as low as it’s been since 2014, so he’s still been quite good this year. He’s struggled a bit of late, though, allowing exactly five runs in three of his five July starts and going just five innings in his last start against Milwaukee.

Martinez throws his four-seamer at 97 mph and his sinker at 95. Those pitches, along with a slider and a changeup, make up his repertoire. While they’ve all been really good, he’s gotten into some trouble with his changeup, allowing six home runs and a .480 slugging percentage on it. The sinker has had its moments as well, with a .346 average allowed, but no home runs. His biggest issues have come against lefties, allowing a .265/.363/.453 line against them. Mike Moustakas has a .393 average on pitches with an effective velocity of 95 mph and higher, while Eric Hosmer is at .349. While Hosmer doesn’t have any extra base hits on those pitches, Moose is slugging .821 on them, so he’s definitely a player to watch against Martinez. As is the case with many good pitchers, you better get him early. The .733 OPS he’s allowed the first time through the order is the highest other than the fourth time where he’s only faced 18 batters all year.

Ian Kennedy threw a dud his last time out against the Orioles, allowing four runs on eight hits in four innings. He’s been very good lately though, with an admittedly arbitrary look at his last nine starts where he’s gone 4-1 with a 3.71 ERA. The Royals are 7-2 in those games. If you choose to take a different arbitrary look, he’s had a rough go of it in two of his last three starts. Maybe the craziest thing is that he hasn’t allowed a home run since July 16th, which has to be near a record for him. One fun fact is that Kennedy was originally drafted by the Cardinals in the 14th round in 2003. He ended up going to USC and getting drafted by the Yankees in the first round three years later. Perhaps due to feeling slighted, the Cardinals have hit him hard. He has a 7.20 ERA in eight career starts against them.

Wacha took a huge step back last season, even getting sent to the bullpen at one point when he posted a 5.09 ERA and allowed a ton of hits. I don’t think the Cardinals quite knew what to expect from him this year, but he’s done a nice job. His strikeout rate has ticked up, he’s gotten the hits under control, and has been pretty much the guy he was in 2014 and 2015 when he was a key part of their rotation. He has a 1.90 ERA over his last seven starts, allowing two or fewer runs in six of those.

He doesn’t have the raw stuff of Martinez, but he’s still got some good stuff. He relies heavily on his four-seam fastball that he throws more than half the time at about 95 mph. He mixes in a changeup, cutter and curve and gets hitters out with all of them. The fastball has actually been his most hittable pitch with a .305 average allowed and .455 slugging percentage. He’s allowed essentially no platoon split with a .723 OPS allowed vs. righties and a .720 OPS vs. lefties. He has a much higher walk rate against lefties, which bodes well for the Royals as most of their patient hitters bat from that side. Getting ahead in the count is big against everyone, but especially Wacha. He’s allowed a .326/.515/.537 line when he’s down in the count compared to .172/.171/.290 when ahead. That’s a pretty big discrepancy.

Vargas hasn’t been the same guy he was early in the year, but he’s still an effective pitcher. He’s just probably been more what we thought he’d be to start the season. His changeup won’t be the equalizer it usually is, as the Cardinals have hit changeups from lefties well this year with a .279 average and .438 slugging percentage. Those numbers aren’t insane, but good enough that he’ll have to have his best changeup to make it work. After two straight poor starts sandwiched around the break, he has been a bit better with six runs allowed in 16 innings, so maybe he’s getting back on track.

I have a feeling the Royals get shut down by one pitcher and actually score some runs against the other, but I don’t for the life of me know which is which. Because of that, I’ll take the easy way out and say they split this set before the head on to St. Louis to finish the series.

Tags: Ian Kennedy, Jason Vargas |
David Lesky
Follow @dblesky
I've been a Royals fan since the day I was born, and have had the opportunity to write about the Royals for nearly a decade now. The winning was better than the losing, but the losing is kind of familiar at least.
read more from David Lesky