This season was a test for many Royals minor league players, with many getting their first test at new levels, encountering struggles or dealing with injuries. One player’s challenge was to be left behind at the previous level that he had performed at the year prior. Some players may have taken this as a negative, but the BP KC Minor League Player of the Year used it as a springboard to a quick promotion and the start of a strong season. 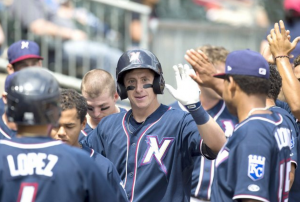 First baseman/Designated Hitter Frank Schwindel came out of the gate with that hot start, collecting multiple hits in eight of his first 10 games of the season. That start for the Naturals earned Schwindel a .350/.374/.577 line with six home runs and a promotion to Omaha after just 34 games. In addition, Schwindel’s heavy lifting helped propel NW Arkansas to a 20-16 record, which they built on to take the first half Texas League division title to secure the organization’s only playoff berth.

Franky is a hard nosed player who loves to play the game and plays with passion. – Ronnie Richardson

It would be easy to think that Schwindel just used that hot start to head to Triple-A and continue his hot hitting but that wasn’t the case. He hit just .221 in his first 19 games with the Chasers while he was forced to adjust to the new level. It was at that point Schwindel got hot and went on a run that the Royals system hasn’t seen in quite some time. From June 29th through the end of the season, he hit in 57 of 63 games, batting .373/.393/.627 in that span. He had a 19-game hitting streak, followed by a 16-game streak, before ending the season with a 10-game streak, all while not going hitless in back to back games at any point over those final 63 games. That stretch helped Schwindel put up a .329 season average and rack up 174 hits, the second-highest total in the GMDM era

While Schwindel was collecting the hits, he was also doing major damage. He led the organization in doubles with 43 and ranked second with 23 home runs. That power is nothing new for Schwindel, who has now hit 20 or more home runs and had 30 or more doubles in three of the four full seasons he has been in the organization. Combining the power with average has resulted in one of the more impressive offensive seasons by a hitter in the Dayton Moore era of the Royals minor league system.

The lack of a slump for Schwindel – a player who doesn’t walk much at all (2.9% walk rate in ’17) – is quite surprising, but what he has done quite well at Triple-A this season is cut his groundball rate considerably to play to the advantage that Werner Park offers right-handed hitters, as seen in his .352/.363/.556 home slash line. The right-handed hitter has a heavy pull approach as is evident in his better than 80% clip to the pull side or center at both Double-A and Triple-A this season. Combine that with his flyball rate, a little sprinkling of luck (.350+ BABIP) and you have the makings of a special season for the Royals first baseman.

Frank is a guy who is going to get you lots of doubles and home runs, that’s something he’s done since joining the organization. That’s what you see in him, he’s a guy that does damage, drives the ball and makes hard contact with an aggressive approach at the plate. We’ve been happy to see him perform well at both Double-A and Omaha.