With the Minor League season winding down, what better time to highlight some of the best players in the minor league ranks for the Royals organization this season?

The Royals 2017 representative in the Future’s Game got off to an outstanding start in Wilmington and at NW Arkansas before slowing down toward the end of the season. Finishing the season with 28 starts and 161.1 innings, Griffin has set career-best in those categories as well as strikeouts while going 15-7 on the season.

Honorable Mention – Jace Vines with a 12-8 record and 3.45 ERA across three levels. 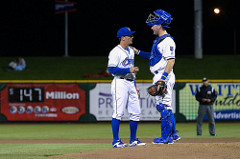 As most of you saw when Gallagher arrived in Kansas City, the 24-year-old catcher brings a high defensive IQ to the field, controlling the running game (35% caught stealing) and calling a good game as well. The difference in his development this season is he has started to help some on the offensive side, hitting .292 this season for Omaha. Over his last 43 games, which includes time in Kansas City, Gallagher has hit .321/.351/.463 with five home runs.

With a player like Salvador Perez ahead of him, the impact that Gallagher can provide will always be limited. However, he’s shown himself that he’s able to take over the #2 catcher role whenever the front office should deem that necessary.

The right-handed power hitter has had a breakout season, combining to put up a .329/.349/.541 line between NW Arkansas and Omaha. The 2013 18th round pick slammed his way to a promotion to Omaha after just 34 games, hitting .350 in that time. Once in Triple-A Schwindel took a little time to adjust, hitting just .221/.236/.346 through his first 35 games in Omaha, then he caught fire. All he’s done since is hit .375 over his last 63 games for the Chasers with 15 home runs and 56 RBI. The 66 extra base hits from Schwindel led all Royals minor leaguers by a country mile and makes this selection as easy as any on this list.

Honorable Mention – Chris DeVito used a hot start in Lexington to connect on 21 home runs in his first full season.

A seventh round selection in the same ’15 draft that brought the third baseman on this list, Cancel has shown off the results at the dish with the flash in the field that could make an impact in the middle of the diamond. Other than Schwindel, there aren’t many players who have been as strong in the second half of the season as Cancel, hitting .309/.367/.548 with nine home runs among his 26 extra base hits. He’s been a catalyst to the Legends second ranked offense in the league.

“Cancel has been a complete player showing the ability to drive the ball; make consistent contact. He turns a great double play and he continues to get better each year. We think he’s developing at a good rate given the age and the performance at the level he’s been at. He’ll continue to get better as he works on the fundamentals of the game as he continues to gain playing experience.” – Ronnie Richardson Royals Director of Minor League Operations

Honorable Mention – John Brontsema hit .323 in 52 games for Lexington before a promotion.

We’ve been writing about Mondesi and his exciting tools for quite a few years, but this is the first season in which we’ve seen him employ those tools for an extended amount of time. True, these numbers – .305/.340/.539 and 41 extra base hits in 85 games – came after significant struggles in Kansas City, but they’re still positive nonetheless. Making a significant impact on offense and defense, Mondesi showed consistent play throughout Omaha’s season with his lowest OPS in a month being his .836 in June.

The numbers in Triple-A hopefully show that the Royals should be ready to pull the training wheels off and let Mondesi compete at the plate at the major league level, instead of asking him to bunt every fourth at bat.

Honorable Mention – Nicky Lopez was impactful at High-A before a promotion to Double-A.

The lack of Top 100 players in the Royals system suggests to some that there isn’t talent here. That’s just not the case. Some may not know who Emmanuel Rivera is now, but if he keeps adding to his trophy case they will soon enough. It started the last offseason when Rivera went to winter ball and won the Puerto Rican Winter League Rookie of the Year, hitting well against much older players. Building on that winter, Rivera arrived in Lexington and became the team’s most consistent performer being named to the South Atlantic League’s Post Season All-Star squad as the league’s best third baseman while leading the league in hits and winning the league’s batting title on the finald day of the season.

Along with the impact at the dish, Rivera shows good range and a strong arm at third. The Royals believe he could be an above average defender at the position in the future.

“We’re excited to see the steps that he continues to take. He profiles at the position, showing the ability to make consistent hard contact.”  – Richardson

Honorable Mention – Oliver Nunez continued showing off his on base ability by reaching base at a .382 clip for Burlington. 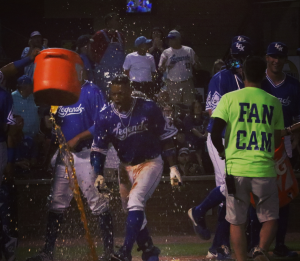 The power and speed that Lee has flashed in his first full season have been an exciting addition to the Royals farm system, making an impact in numerous categories. Starting Thursday’s game, Lee has 17 home runs, 20 steals, and a 12% walk rate while being one of the youngest players in the league at just 18 to start the season. On top of the impact on offense, Lee’s cannon for an arm has provided 14 outfield assists on defense leading all Royals players in the system in that statistic.

Are there things Khalil needs to improve? Yes. He’s not afraid to get into long counts and his swing-big-at-all-times approach has him leading the South Atlantic League in strikeouts by a good distance. He’s also been caught on the bases 18 times. Still, in a system that is lacking in impact talent, Lee’s name is definitely one on scouts and writers minds and an appearance in a Top 100 isn’t as far off as one might think.

Last season Nicky Lopez jumped on this team despite being having less time to establish himself as a draft pick that same year. This year Gigliotti followed the same path, getting on base at a high clip, playing superior defense at a premium position, and making an impact with speed on the bases while showing enough pop to keep pitchers honest. The .320/.420/.456 line in 64 games dwarfs all other possible center fielders that could’ve been chosen for this list.

Fans would’ve preferred seeing Soler’s numbers and playing time in Kansas City this season as opposed to Omaha, but it is what it is, and what Soler was for Omaha was an excellent power hitter. He led the Chasers with 24 home runs despite playing just 74 games. It wasn’t just all power for Soler either, as the outfielder reached base at a .388 clip which led all Royals minor leaguers this season thanks to 50 walks earned by the slugger.

Honorable Mention Outfield – Travis Jones has had an excellent introduction to pro ball with a .947 OPS between Arizona, Burlington and Idaho Falls.

Playing most of his season at 20 years of age, Vallot proved that he wasn’t above his head in the difficult hitting environment that is Frawley field. Continuing to exhibit his power potential, Vallot put up a solid .206 ISO in 89 games in the Carolina League. That number may not stand out as truly special, but no player that has made it to the majors in the GMDM era has put up a higher number in 200+ plate appearances for Wilmington.

The young catcher continued to show that he can get on base at a high clip (.380 OBP), while improving as a receiver and game caller, helping Wilmington to the third best team ERA in the league.

“Chase is still only 21 and every league he’s been in he’s been one of the younger players in those leagues. His overall development is something we are excited with moving forward.” – Richardson

Under the new draft rules, picks in the back half of the first 10 rounds typically go to players that teams feel they can sign at less cost in order to save money to provide to their earlier round selections. Teams don’t punt on those picks, but they don’t expect to see major impact early. That’s not the case for last year’s 10th round selection however, as Lovelady has zoomed through the system to make it to Double-A in his first full season. With a plus fastball that ranges from 93 to 98 mph, next to the makings of a plus slider with good control and command, Lovelady has blitzed High-A and Double-A hitters to the tune of 77 strikeouts in 66.2 innings while allowing just a 0.95 WHIP and 1.62 ERA this season.

“Our scouts did a tremendous job at evaluating him and identifying him as a player that could compete at a high level and move through the system quickly, and he’s done just that. We’re very excited about Richard and the strides he’s made in his first full season.” – Richardson

In High-A Wilmington, its Judy Johnson Field at Frawley Stadium