A second consecutive October without the Royals is less than ideal. At least we can start to focus on the offseason and shine a light on the business the Royals must attend as they start to formulate their Post-Core plan.

It’s time to crack open the spreadsheet and talk dollars.

Before we jump in, a quick refresher on where the Royals have been financially over the last several seasons. Once maligned for not spending enough money, the Royals payroll bottomed out at around $38 million in 2011. That year is notable for a couple of reasons, not the least of which is it heralded the arrival of the core players who are now set to depart via free agency. The youth movement coupled with the trade of Zack Greinke and the retirement of Gil Meche dropped the payroll to levels previously seen in 2005.

Since hitting the floor in 2011, the Royals payroll has been steadily climbing. It topped the $100 million mark after winning the AL pennant in 2015 and, despite protestations that the club was living outside of its means, set another team record last year at $143 million. Give David Glass credit. He always said he would spend if it made sense for the organization and he came through. And continued to open the wallet. The notion that the Royals are cheap has been effectively laid to rest.

As part of the recent spending spree, the Royals face this winter with a hefty amount of payroll already in place. They have nearly $100 million committed to 10 players. 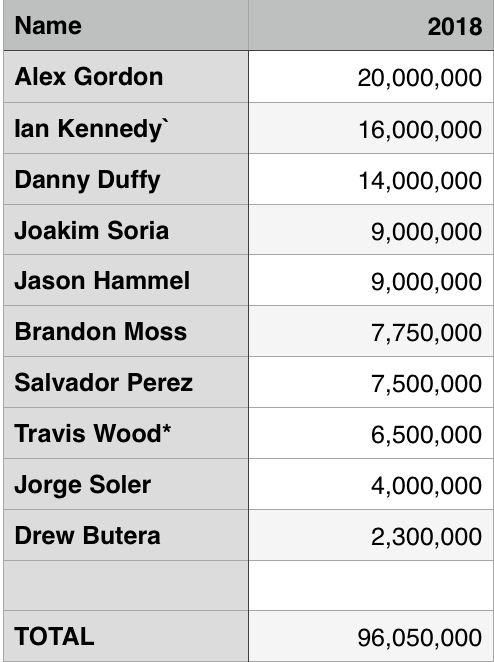 The table above is a mixed bag. There is the potential for a limited bargain in the Salvador Perez contract, although as he gets older and his salary inflates, that’s becoming less and less likely. The hope here was always that Ian Kennedy would pitch the Royals to the postseason and bail on the final three years of his deal, but October didn’t happen and now neither will the opt out. The money handed to Joakim Soria was always something of a mystery given the Royals proclivity of building a bullpen from an assortment of castoff arms. One is left to wonder how Alex Gordon comes close to providing the value the Royals will need to not take a total loss on his deal.

Then, there is the Padre Trade that will continue to cause heartburn for the next twelve months as the Royals will pay all of Travis Wood’s contract. He’s the new Omar Infante.

Whatever. This is all money under the bridge. Or on the ledger. However you want to mix your metaphors. (This will be revisited later this winter. Some of the deals the Royals have cut over the last 18 months or so have been extremely poor with the potential to stymie any attempts to further a competitive window.)

It should be noted the above doesn’t include the late Yordano Ventura. The contract extension he signed called for him to earn $6.45 million in 2018. I have no idea if the Royals are honoring his contract as if he were still pitching for the team (paying his estate like any other player on the roster) of if there was some sort of settlement. Until we know for certain, this throws the entire Royals payroll estimate into flux.

Let’s circle back to the big number. The Royals have $96 million already on the books for next season. For perspective, that’s more than any Royals Opening Day payroll for their entire roster  for each season prior to 2015. Again, this is just an amazing development. Even if much of that money is tied to players who can’t match the value.

This offseason is different from the ones of recent past in myriad ways. One of which is the number of arbitration cases facing the Royals. Barring a trade between now and the close of the offseason, Dayton Moore and company will be negotiating with only four arbitration-eligible players. Of those four, three of them are fringe players on the roster eligible for arbitration for the first time.

On Monday, Major League Trade Rumors released their annual estimates for the arbitration candidates for each team. These are usually accurate enough to give us a better picture of the overall fiscal situation of a team like the Royals at this early juncture of the offseason. 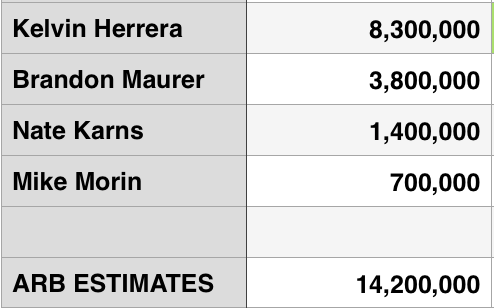 Kelvin Herrera is set to receive the largest raise of this group. He’s eligible for the fourth and final time before he has the privilege hitting the market as a free agent. Brandon Maurer is arbitration eligible for the second time and will find a modest increase in his pay packet. Nate Karns and Mike Morin are first timers. Karns’ earning power was curtailed due to the injury that short-circuited his 2017 season.

With the already committed salary and the arbitration estimates, that places the Royals payroll for 2018 at just above $110 million. (Remember, this is just an estimate.) This covers just 13 players out of 25. There are still plenty of holes to fill and money to spend. In some ways, it was good that Moore didn’t come out for the postseason press conference to plead austerity again. We wouldn’t have believed him, anyway. At least the needless smokescreen isn’t there.

Still, the increases in payroll the last three years have hovered between 18 percent from 2014 to 2015 to last year’s eight percent. Nothing to dismiss, but those increases were predicated upon the belief the club would be competitive. Expectations will (and should) change. That has to impact the payroll. The Royals could boost their Opening Day number closer to $150 million, but with the dollars already committed, does that make the team a contender? They carried a $143 million Opening Day payroll last year and were never really in the race.

Sadly, there are still teams playing. Meanwhile, the Royals brain trust is planning, figuring the next moves and how they can build a roster that makes sense given the commitments already made. This isn’t an easy task ahead.