At the trade deadline, the Royals were in the thick of the pennant race.

Entering August the Royals trailed Cleveland by two games. They had a firm grasp on the second AL Wild Card, checking in two and a half games ahead of Tampa. Then, it went to shit. The Royals went 25-33 the last two months of the season, the third worst record in the AL during that time. They were outscored by 88 runs, which was the second highest deficit in the league. They were outclassed in every facet of the game.

They finished in third in the Central and missed the Wild Card by five games. What went wrong?

It’s not an easy question to answer. We at least need to try. Today, we begin our 2017 postmortem. This will be a series of posts detailing those final two months and how the Royals ultimately fell short in their quest for one last shot at glory with their championship core.

We begin with the trade for Melky Cabrera.

On July 30, Jorge Bonifacio was the Royals starting right fielder compiling a solid, if unspectacular, rookie campaign. He was hitting .258/.327/.446 which was worth a .260 TAv. His defense was suspect, as expected, but generally passable (let’s call him below average in the outfield) which put him at a -0.3 WARP.

As the Royals examined their roster in search of areas to upgrade, Bonifacio’s position made sense to target. A day prior to the deadline, the Royals pulled the trigger on the deal, sending AJ Puckett and Andre Davis to Chicago to bring Cabrera back to Kansas City.

At the time of the trade, Cabrera was hitting .295/.336/.436 with a .263 TAv and was worth 0.3 WARP. It wasn’t a surefire upgrade over the production they were receiving from Bonifacio, but the Royals were banking on the veteran Cabrera to rise to the challenge of the pennant race. Besides, adding another outfielder to the mix, gave Ned Yost some flexibility in his lineup construction. With Alex Gordon in a season long slump and Brandon Moss struggling against right-handed pitching, the Royals could use another option in the lineup.

It didn’t work as well as the Royals hoped.

Once Cabrera joined the Royals, he expanded his strike zone. The following charts are from Brooks Baseball and represent Cabrera’s swing rate with the White Sox on the left and the Royals on the right. 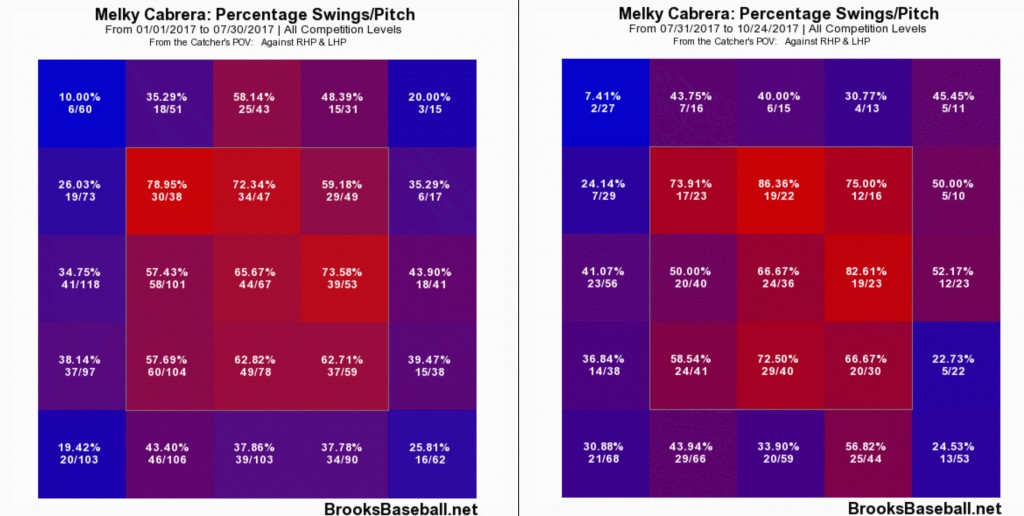 This is the curse of the small sample size when you make a trade for a player in the stretch run. You may think you know what you’re going to get, but variations will arise. Some positive, others negative. For Cabrera, he owns a 32 percent chase rate for his career. He was a bit below his average the first four months of the season, but felt the siren of regression in the final two. He finished with a 32.1 percent chase rate overall, which was his best mark since 2009. Except the Royals didn’t reap the benefit of that. At all.

Coupled with the increased chase rate, Cabrera was making more contact than his norm on pitches outside off the zone with the Royals. Again, regression was at play here. Cabrera made contact on 77 percent of the pitches he swung at outside of the zone with the Sox. With the Royals, that number jumped to 83 percent. Combine the two and he finished the season with a 79 percent contact rate on pitches offered at outside the strike zone, which is right in line with his career average.

If we’ve learned anything from this sabermetric revolution, it’s that not all contact is created equal. By expanding the zone and putting the bat on the ball, you’re hitting on the pitcher’s terms. Cabrera’s increased chase rate coupled with the rise in contact outside the zone resulted in a precipitous drop in hard contact rate. At 32 percent with the White Sox, it tumbled to 24 percent with the Royals. So it follows his slugging percentage, on base percentage, ISO and BABIP all suffered steep declines once he switched uniforms.

All deadline deals represent a gamble of some sort. Cabrera was never going to provide a massive upgrade (a la Ben Zobrist over Omar Infante in 2015), but it wasn’t unreasonable to expect a tiny improvement over the expected production from Bonifacio those last two months. The Royals essentially received the worst case scenario for their end of the deal.

Tags: Melky Cabrera |
Craig Brown
Follow @CraigBrown_BP
Craig has been covering the Royals at various outlets for 14 years. His work has appeared at various websites, including Sports On Earth, Baseball Prospectus, ESPN, The Hardball Times, and SB Nation. Reach him at craig.brown@baseballprospectus.com.
read more from Craig Brown