The Brewers are hot, having won six in a row, so that’s great for the Royals. There’ll be a very familiar face at the top of the order in Lorenzo Cain, but he’s just setting the table for some prolific run producers to drive him home and he’s thriving so far in his first season back in Milwaukee. This isn’t like an old school AL East lineup because there are a few holes in it, but they have four TAvs above .300 and a couple more guys in there who just haven’t shown fully what they can do yet in 2018. They can hit even if they haven’t scored like you’d expect. If you want reason for some concern, it’s the starting pitching, which is why they’re a great fit for Danny Duffy in a deal at some point this year. But even so, they’ve been okay in that role. The bullpen, even without closer Corey Knebel for the most part, has been absolutely lockdown. If the Royals want to win these games, they likely can’t follow the formula they did in Detroit in their wins. They need to get on the board early and hold a lead.

Note: All league stats listed in charts are through Sunday. 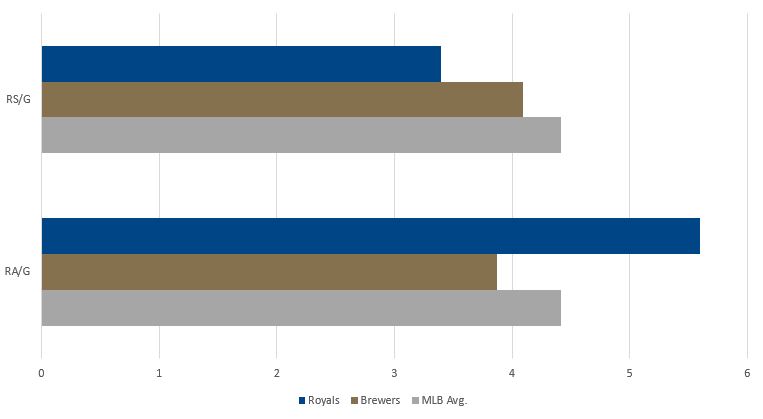 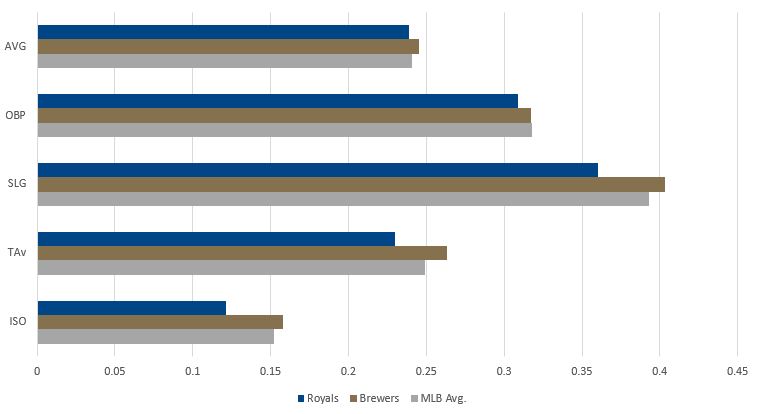 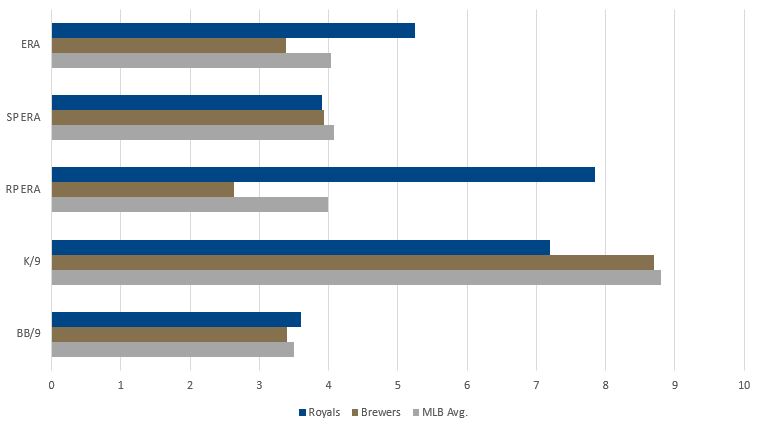 I don’t believe there’s any relation between Zach and Kyle, which, you know, is good for the Brewers. Davies is listed at 155 lbs., so he’s not exactly a physical specimen, but he’s a pretty solid pitcher. He relies heavily on a sinker that he throws about 46 percent of the time. So far this season, he’s actually been throwing that less and going to a cutter a lot more, which is interesting because the cutter has been mashed to the tune of a .348 average with a .783 slugging percentage, but he is getting more swings and misses on it, so there’s a give and take I suppose. He also mixes in a changeup and curve. At his best, he’s getting grounders, but the stuff isn’t top notch, so if he’s off, he can be hit and he can be hit hard. At least last year, getting to Davies was much easier the first time around with opponents hitting .315/.356/.495 against him the first time and then considerably worse each time through after that.

Kennedy is coming off his first bad start of the year, so we’ll see how he rebounds. He has finally started to get bitten by the home run ball after a long (for him) streak to start the season. He’s so reliant on his fastball that this doesn’t matter quite as much as for some other pitchers, but his secondary stuff has been absolutely outstanding. He’s allowed a .195 average and just one extra base hit in 41 at bats that ended on either his changeup, curve or cutter. The Brewers can typically handle a fastball pretty well, so it might behoove Kennedy to change things up a little bit in this one and go heavier with his curve and cutter, which the Brewers have struggled with this season. He doesn’t have a ton of experience against the Brewers lineup, but Ryan Braun has eaten him alive, hitting .391/.462/.652 against him in 26 plate appearances, though most of that damage came in the 2011 postseason when he went 5 for 7 against him with two doubles.

The Brewers acquired Anderson in the deal that sent Jean Segura to the Diamondbacks prior to the 2016 season. I can’t imagine they expected to get what they’ve gotten out of him. Last year, he posted a 2.74 ERA and a slightly less sexy 4.05 ERA in 141.1 innings and has come out of the gates pretty strong this year, though he is outperforming his peripherals again. The question is how long he can do that. Some, like Matt Cain, can keep it up for a long time. Others, like Jeremy Hellickson, eventually succumb to regression. Anderson is a little like Davies in that he doesn’t have overwhelming stuff, but he gets the job done. Usually. This year, his fastball has been hit and hit hard with a .719 slugging percentage allowed. And he’s strangely been fantastic against lefties and rough against righties this year. He had a similar split last year, but he was good against both, whereas this year, the righties have crushed him. We might see some very real Soler Power in this one with that in mind.

Hammel’s first start of 2018 was reminiscent of his 2017 season, and that was cause for some groans. Since then, though, he’s been fantastic, with a 1.77 ERA in 20.1 innings pitched. A known bugaboo for him has been that third time through the order, but even with a big time struggle in his first game, he’s allowed just a .267/.333/.333 line in 33 plate appearances in the third and now fourth times through the order in games. Would I test it with him too often? No I would not. But it is nice to see him have some success in that arena at the very least. Where I believe we’ll see regression is with the home run ball. He’s giving up some hard hit balls and even though his ground ball rate is up with increased use of his two-seamer and his fly ball rate is down, he’s allowed a surprisingly low number of home runs. This Brewers lineup might give him some trouble in that regard with their power. The good news, though, is that he’s 10-2 with a 3.13 ERA in 15 career starts against the Brewers. Sure he hasn’t faced them 2016 when he had a 5.32 ERA against them, but the numbers are still shiny. Like Kennedy, Braun is a thorn in his side with a .355/.459/.774 career line against him in 37 plate appearances. That includes four home runs. Yikes.

My guess is the teams split this series. There’ll be a bit of a lift from having Salvador Perez back and things tend to even themselves out in baseball over the course of a long season. I expect the Royals to string together some wins at some point soon, so why not start now?

Tags: Chase Anderson, Ian Kennedy, Jason Hammel, Zach Davies |
David Lesky
Follow @dblesky
I've been a Royals fan since the day I was born, and have had the opportunity to write about the Royals for nearly a decade now. The winning was better than the losing, but the losing is kind of familiar at least.
read more from David Lesky