This has become an annual exercise in this segment of bandwidth. For the third year running, it’s time to celebrate the hitting transformation of one Michael Christopher Moustakas.

Let’s just get this out of the way: Moustakas is absolutely punishing the baseball.

According to data from Statcast and Baseball Savant, Moustakas is barreling a pitch once every 13.6 plate appearances. (For the uninitiated, a “barrel” in Statcast parlance is a batted ball, in terms of exit velocity and launch angle, that has led to a minimum .500 batting average and 1.500 slugging percentage.) That ranks him eighth overall. Moustakas also owns the second most balls put in play at an exit velocity of 95 mph or greater. He’s hitting a baseball “hard” in just over 52 percent of the time when he puts the ball in play. 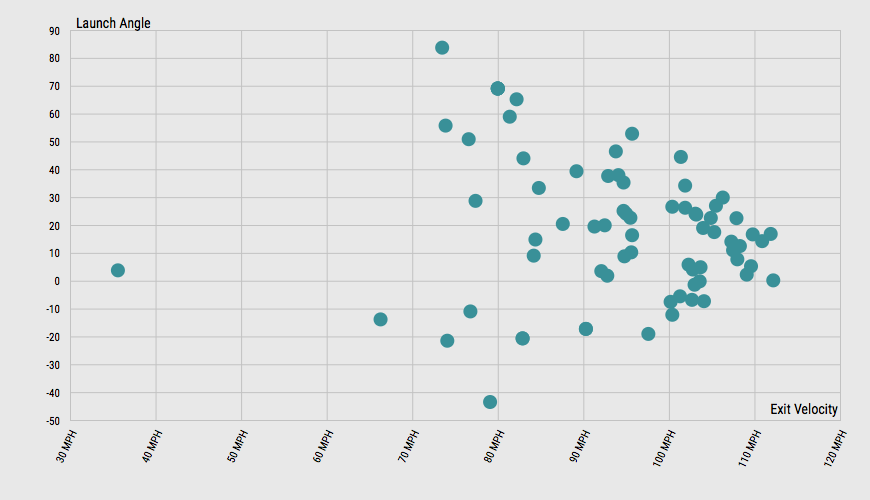 You probably can’t find a better chart illustrating the intersection of launch angle and exit velocity than this. A strong cluster of plots beyond 100 mph with a positive launch angle.

This is the continuation of the evolution of Moustakas as a hitter we first saw in 2015. That was the year he set about beating the shift, taking the ball to the opposite field with greater frequency than ever before. In 2014, he was a dead pull hitter, taking the ball to the right side of the field over 50 percent of the time. In 2015, he saw a decrease in his pull rate by nearly 11 percentage points, going more up the middle and to the opposite field than ever before. Moustoppo, indeed.

It turns out, the change in batted ball profile didn’t stick. Instead what it did was unlock his potential as a power hitter. With a career high .348 OPB in 2015 along with a then career best .470 slugging percentage, Moustakas saw a power surge to open the following season. We’ll never know what his immediate follow-up was going to be as his season was prematurely ended with a knee injury.  We know how he rebounded in 2017. A franchise-record 38 taters with a career-best .521 slugging percentage. It wasn’t his best overall offensive season – that still belongs to 2015 when he posted a .291 TAv – but it was damn good.

So here we are. A failed foray into free agency and Moustakas landed back in Kansas City for an encore.

A stat to key on is his HR/FB rate. It’s a notoriously fickle number for hitters all across the game. Yet it’s a tidy illustration as to how Moustakas has evolved into a dangerous offensive threat.

When Moustakas started going the opposite way in 2015, he did so without really altering his batted ball profile. That year, his 41.4 percent fly ball rate was fairly close to his career average to that point. Yet the takeaway is, despite pulling the ball less than ever before, he didn’t necessarily sacrifice his power. That allowed him to unlock himself as a hitter. As the pull percentage trends back toward his career norm, he’s become consistent in his batted ball profile and is driving the ball with much more authority.

As noted, you can see the transformation in his HR/FB rate. Once he centered himself at the plate and stopped trying to pull everything, the power came naturally. His HR/FB rate from each of the last three seasons is elevated, yet remarkably consistent. That’s resulted in the corresponding uptick in ISO, topping .200 each of the last two seasons and on track for a monster year in 2018.

On the radio broadcast on Sunday, Steve Stewart noted how “quiet” Moustakas was at the plate. That’s a compliment. It seems as though he’s been able to slow the game down. That’s due to a confidence that comes from the success he found in altering his approach. A couple of pitches later, he barreled (naturally) an 86 mph change-up on the outer half into the right field seats (naturally) for a three-run home run. He’s only quiet until he unleashes one helluva violent swing.

It’s April and Moustakas is off to another torrid start. He’s one of the few bright spots in a Royals offense marked by general malaise as opposed to actually scoring runs. So the question is, as it usually is with all hot starts, is this sustainable?

It should be obvious from the preceding paragraphs that I think it is sustainable. His .313 BABIP may point to a correction, but based on his average exit velocity and launch angle, it’s something he’s come by honestly. It’s not a fluke stat powered by a handful of bleeders and doinks. His HR/FB rate is right in line with his performance of the last couple of years (since his transformation as a hitter) and his batted ball profile looks consistent.

In fact, he’s underperforming his expected rates based on Statcast data. His xSLG (expected slugging percentage) of .710 is nearly 100 points higher than his real rate. Same for his xwOBA at .446 against his current .389 wOBA. He’s so locked in at the plate and scalding the baseball that his numbers could (and should) be better. Can you imagine? His rates may decrease a bit as the sample size increases and as pitchers adjust to Moustakas and the Royals lineup, but there’s no reason to fear a precipitous correction.

This version of Mike Moustakas is simply the next step in his evolution as an offensive force.

None of this was accidental, nor was it preordained. Moustakas recognized the path his career was going if he failed to make adjustments. He changed and has become the power hitter we see today. If he can stay on the field, his trade value will soar and his second go-around in free agency this winter will be much more lucrative.

Tags: Kansas City, Mike Moustakas, Royals |
Craig Brown
Follow @CraigBrown_BP
Craig has been covering the Royals at various outlets for 14 years. His work has appeared at various websites, including Sports On Earth, Baseball Prospectus, ESPN, The Hardball Times, and SB Nation. Reach him at craig.brown@baseballprospectus.com.
read more from Craig Brown